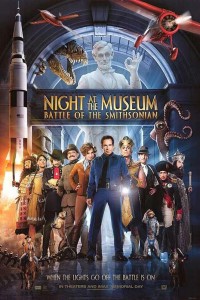 Night at the Museum 2 – Battle of the Smithsonian is an action/comedy film that attempts to be a meaningful and engaging sequel to the original Night at the Museum movie that scored broad fan appreciation back in 2006. Both films feature Ben Stiller as the main character and hero who literally fights to save a multitude of museum characters. Some are human, others are animal, and are neither human or animal–who by some kind of ancient magic, come to life at night at the Museum of Natural History in New York City. Stiller stars as Larry Daley, the former museum guard in the first movie, who now has his own company which sells such handy products like glow-in–the dark flashlights. Larry Daley’s son Nick, played by Jack Cherry, is also in this movie helping his father with the challenges deciphering the logistics of where the multitude of museum characters are being moved to in their soon to be new home in the Smithsonian Museum basement.

Many characters from that first movie, repeat in the sequel such as: Ricky Gervais as Dr. McPhee, a curator at the museum. Rough Rider Teddy Roosevelt, played by Robin Williams; Owen Wilson again plays the miniature cowboy character Jedediah Smith; along with another miniature figure, a famous Roman General Octavius, played by British Comedian Steve Coogan. Attractive Mizuo Peck plays Sacagawea, the famous female Indian Scout from the Lewis and Clark Expedition. Other memorable characters are the mischievous Dexter the monkey, the giant T-Rex skeleton and giant Squid and Wooly Mammoth, along with lions and snakes, etc. 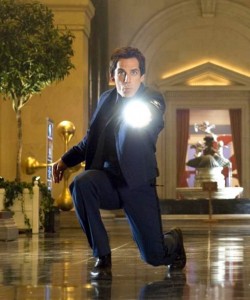 Director Shawn Levy directed both Night at the Museum movies, and seems to have used the same exact formula of high jinx, good vs. bad, but added a potential for romance between Larry Daley and Amelia Earhart. The romantic scenes between the two seemed out of place in the swirling high action tempo that involves both characters—when we suddenly see them casually getting to know each other—while doom is knocking on the door. Not that there can’t be chemistry between a man and a women in stressful situations—but what was starkly out of place was the effort to “stop and smell the body odor” in the midst of the sky is falling around them with the bad guys gaining the advantage, and the end is near type scenario.

I applaud the writers, Robert Garant and Thomas Lennon, for attempting to link interaction between very unique historical figures who carry a lot of famous and infamous baggage that can be, and was distracting in some instances. For example, casting General George Custer in a leadership role, where his historical past reminds most of us that Custer was and is despised by most Native Americans, and others, to this day for the pain and suffering he brought to bear on the Native Americans he encountered pushing Manifest Destiny down their throats. More historians agree that such a despised historical figure would be a lightning-rod of controversy if he was recast in some misunderstood nice guy type role. Imagine Hitler coming to the rescue of non-Germans in any situation. Custer was a bad guy. In the movie he’s saddened by failing to crush the Indians at Little Big Horn. Just make him a bad guy along with Capone and Attila the Hun. That works.

Other disconnects include throwing in of cavemen who easily seem to adjust to understanding becoming part of the modern gang of good guys. In reality these cavemen would be as wild as the lions who do want to eat Larry Daley. Then, watching this shiny balloon blow-up pony bopping around was cute but goofy. And using President Abraham Lincoln as the ultimate trump card against the bad guys makes sense but from a leadership role and inspirational role—not as the kick-ass guy in his plaster business suit doing battle with an arch villain. However, we would like to see politicians who get us into war—go fight in those wars. If you’re going to use the battle Lincoln, remember he put together the best fighting generals and inspired them to kick-ass through their best fighting men. History loves heroes, so do give historical relevance to the real bad guys and the real good guys from the roles they actually played. Teddy Roosevelt was a Rough Rider and did charge the enemy in the get-up Robin Williams’ wore. That makes sense. Teddy wasn’t President then—he actually was a Rough Rider. That made sense. Hoping a statue of a great man will embody what it takes to fight evil is not making history come alive. It simply makes history more confusing. In the end, a single shot actually took President Lincoln out, so—so much for his hand-to-hand combat promise.

I do recommend seeing this movie if you have little or a lot of historical perspective in the characters represented. Blissful ignorance will block out all potential distractions because it won’t matter much what General Custer does in the movie if one is unaware of what he did in the past. However, softening a bad guy for modern consumption can irk people/customers with long memories. 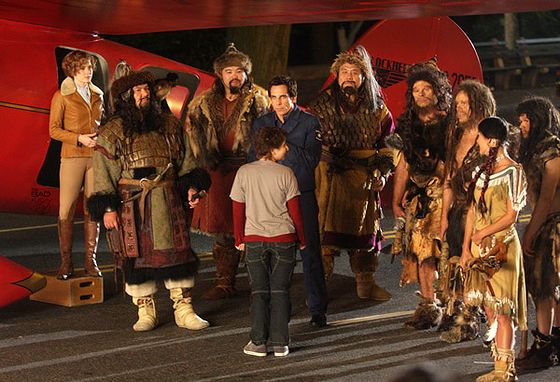 Amelia Earhart does win our hearts once again as she flies out into the wild blue yonder. Too bad she was lost and never found. Writers and directors seem to want us to bring them back because we actually missed them for what they meant to us. Earhart was a very brave and curious woman who inspires women and others as a pioneer for people who want to climb a mountain, or fly high when most would not want to take on such a challenge. She didn’t cure cancer or save any lives that I can recall, but Amelia Earhart did inspire many to risk losing yourself for what you believe in. If I were to choose a romantic female lead in such a movie—I’d go with Joan of Arc. She was inspiring and kick-ass and didn’t get lost in the wind. She burned for her willingness to fight for was right in the face of tyranny. Night at the Museum 2 – Battle of the Smithsonian is pure, but confusing entertainment—that could be done so much better by real historians and casting directors. If we leave it at that, the popcorn will go down much more easily. Yes, tease us with characters who left our memories long ago. Some made an impression, good and bad—others my make us go back to history to research what we missed. We may discover a hidden history which I like to call the true history. Written by eye-witnesses, people who lived it or researched it to the point of facts based history. If Night at the Museum 2 – Battle of the Smithsonian does anything—it should be to inspire us to go back in history to discover the good, bad and ugly and how repeating it is our biggest curse. Not only will that be entertaining, it will allow us to dodge the real alligators in the water that seem to come trick us every time into getting deeper and deeper into repeating mistakes of the past—you can name the issue, e.g., war, depression, tyranny, environmental threats, and human nature. Repeating history cuts two ways. We can learn from it and grow to survive, or not. See you at the movies.