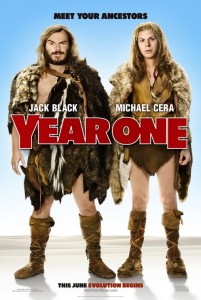 New footage from the upcoming comedy “Year One” starring Michael Cera and Jack Black. This clip feature’s Michael Cera’s character, Oh, wanting to talk to a girl that he likes. His best friend Zed (Jack Black) tells him to dance for her, but the dance is the “Jakal Dance,” which Oh doesn’t want to perform.