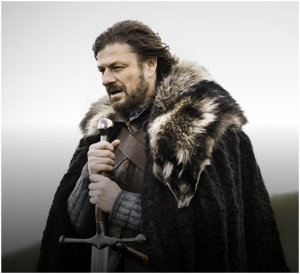 The more I see for the George R.R. Martin based series Game of Thrones premiering on HBO in 2011, the more excited I get. Although, each moment of excitement gives me a little startle of fear. The fear is that a show like this can’t possibly last on HBO. Shows like Deadwood and Carnivale both had epic ideas, but were ultimately doomed to fail because of high production values which led to high costs. Can HBO find a way to make this profitable?

The good news is that shows like AMC’s The Walking Dead have shown that material once thought unsuitable or unfilmable for TV can make it, and to top it off can be critical and commercial darlings. Most likely Game of Thrones will attract much of the same crowd, and throw in a bunch of people who love fantasy series like Lord of the Rings. Although, will the lack of magic, and the addition of politics throw some users?