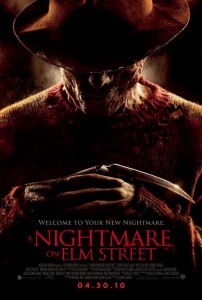 So far both trailers have been great, although to be honest most Michael Bay productions do. (Does anyone remember that The Island had an awesome trailer as well?) The look and feel of the film is far and above better looking that most of the horror films that are coming out lately. All I’m hoping for is a good scare. It has been a while since a horror film has genuinely scared me.

Jackie Earle Haley seems like a good choice for the role, because lets face it he is a bit creepy looking. Although, I’m not sure I’ll be able to associate his voice with anything but Rorschach. There is a  couple people I recognize in the film (like the kid from Veronica Mars), but most of the cast seems pretty much unknowns.

Despite if the film is good or bad, it will still make money hand over fist. Nightmare on Elm Street is Wes Craven’s best film series, and everyone from my generation associates it with scaring the pants of them.

Freddy Krueger returns in a contemporary re-imagining of the horror classic. A group of suburban teenagers share one common bond– they are all being stalked by Freddy Krueger, a horribly disfigured killer who hunts them in their dreams. As long as they stay awake, they can protect one another–but when they sleep, there is no escape.