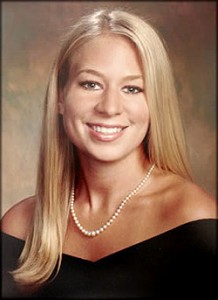 The Natalee Holloway case seems to be similar to the Jonbonet Ramsey case in the fact that it is a tragic story of a pretty white girl that just won’t stay out of the media. This time it is back in the news once again from Joran Van der Sloot, the prime suspect in the case.

For those of you who don’t know the story, Natalie Holloway disappeared May 30, 2005 while vacationing in Aruba for a high school graduation trip. Holloway went missing the night before she was scheduled to leave Aruba with classmates. She was last seen outside of Carlos’n Charlie’s, a local chain in the Caribbean. The last people spotted with her was Joran Van der Sloot, Deepak Kalpoe, and Satish Kalpoe. The men at the time denied any foul play, and said they dropped Natalie back at the hotel. However, these men became the prime suspects in the case. All formal charges were dismissed among the men after the body of Holloway was never recovered.

The case was reopened a couple years ago because of comments made by Joran Van der Sloot admitting to the murder on videotape while under the influence of drugs. After that tape came out, he went on a talk show with Greta Van Susteren and said he had not killed her, but sold her into white slavery.

Now Van der Sloot has once again come out and confessed, once again on TV outside of Aruba. Van der Sloot alleges that he dumped Holloway’s body into a swamp off the island of Aruba. The interview has not aired because the station who owns it, De Telegraaf, believes it is mounted in “lies and fantasy”. He maintains it was an accident, much like one of his former stories. That she had a seizure and she died accidentally, and he dumped her body after that.

So, lets get this straight. This man has repeatedly lied about the situation. It is pretty obvious he is guilty, but prosecutors unfortunately still don’t have the body of evidence they need to convict him, other than testimony that might not hold up? At best he is a pathological liar with the worst plan for fifteen minutes of fame. The worst he is a murderer who continues to roam free after the death of an innocent person.

What do you think of the situation? Should Van der Sloot be tried?