Movies to Watch in Honor of the “End of the World” – Saturday, May 21

Well, as most of you are well aware… this Saturday, May 21st is the end of the world. And what better way to countdown to the Rapture than to watch some great “end of the world” movies! Hurray! 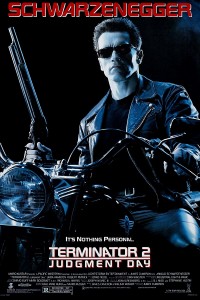 Get your last few days on Earth started with none other than “Terminator 2: Judgement Day.” And right now, it’s like a two for one bonus! Celebrate the train-wreck that is Arnold Schwarzenegger’s life, as well as a great movie about the apocalypse! It’s too bad Harold Camping and the folks at FamilyRadio.com didn’t tell us that the end of the world would come at the hands of cyborgs. A guy’s gotta dream…

A decade after Sarah Connor (Linda Hamilton) destroyed the original Terminator, a second unstoppable killing machine (Arnold Schwarzenegger) arrives from the post-apocalyptic year 2029. But this time his mission is to stop an even deadlier Terminator, the T-1000 (Robert Patrick), made entirely of shape-shifting liquid metal and determined to kill young John Connor (Edward Furlong), the future leader of the human resistance. Sarah, John, and the Terminator counter by going after the scientist responsible for developing Skynet, the computer system fated to destroy humanity, leading to an explosive and spectacular clash with the fate of humanity in the balance. Whereas James Cameron’s original THE TERMINATOR was a low-budget marvel of efficiency and speed, TERMINATOR 2: JUDGMENT DAY is an action-packed blockbuster with some of the most amazing stunts ever filmed and ground-breaking, Academy Award-winning special effects. Star Schwarzenegger was paid in the form of a $15 million dollar jet to revisit his most famous role as the Terminator, this time made kinder and gentler against the silent, relentless T-1000. One of the most popular films of the 1990s, James Cameron’s action masterpiece is both a thoughtful look at violence in human nature and an exciting, nonstop thrill ride. 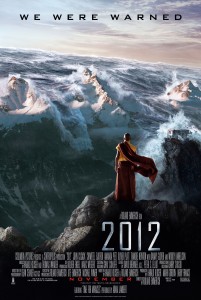 So what if the movie isn’t that great!? It’s a pretty entertaining look at the end of the world, filled with some decent special effects. Although they obviously made a huge mistake having it set in 2012 instead of 2011…

Never before has a date in history been so significant to so many cultures, so many religions, scientists and governments. As the world faces a catastrophe of apocalyptic proportions, cities collapse and continents crumble. 2012 brings an end to the world and tells of the heroic struggle of the survivors. 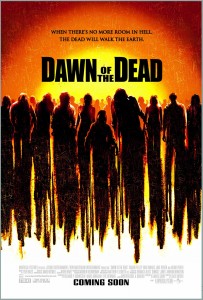 Need I say more? This is one of my favorite zombie movies of all time. The original was my favorite before this one, and I am amazed at how good the remake ended up. This is the movie that changed the way that zombies act forever. Until this one, all they did was walk around and moan. Now they run after you! Oh crap, I hope this isn’t how it ends…

A re-envisioning of George Romero’s apocalyptic horror classic, “Dawn of the Dead”: An unexplained plague has decimated the world’s population–and yet, the dead aren’t dying. They’ve become zombies, stalking endlessly in a quest to feed on the flesh and blood of the few remaining living. A ragtag group of desperate survivors in a Wisconsin town seek refuge in a large indoor mall, where they must learn not only to protect themselves from the ever-increasing zombie horde, but also to co-exist with each other as a last bastion of humanity. Sealed off from the rest of what used to be the world, the group uses every available resource, in their against-all-odds fight, to remain alive and human. 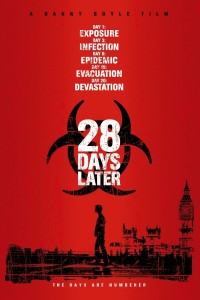 Another one of the best zombie movies of the past decade, “28 Days Later” is pretty much near perfect. This time the action takes place in London, and the main character wakes up from a coma unsuspecting to what is going on. I really enjoy films where the audience knows just as much as the characters do. Danny Boyle does a terrific job with this one, and stars Cillian Murphy in one of his best roles to date.

After breaking into a primate research facility, a group of animal rights activists discover caged chimps chained up before banks of screens displaying horrifying, violent images. Ignoring the warnings of the terrified researcher who maintains that the chimps are infected, they begin to free the animals and are immediately subjected to a bloody attack from the enraged creatures. Twenty-eight days later, Cycle courier Jim awakes from a coma in the deserted intensive care unit of a London hospital. He wanders out into a church where he finds dead bodies piled in heaps on the chapel floor. A sudden explosion from a makeshift bomb heralds the arrival of fellow “survivors” Selina and Mark. They take Jim to safety and explain to him that this infection is transmitted by blood and overwhelms the infected victim with a murderous rage within seconds. Britain has been overrun, and they have no way of knowing if it has spread worldwide. Their only hope of survival may lie in the hands of a Manchester group of soldiers, as they claim to have the “answer” to infection and invite any survivors to join them at their blockade. Faced with no practical alternative, the group sets out northwards, unaware that the worst is yet to come. 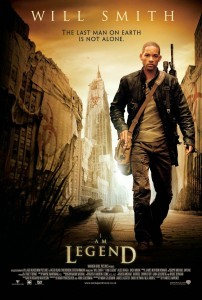 Call me crazy, but there is just something about being the last person on Earth that seems cool. Granted, after a while it would get pretty lonely and boring. But at first, the idea of doing whatever you want is pretty neat. This film is, of course, a remake of the Charleston Heston film “Omega Man,” which came after “The Last Man on Earth” starring Vincent Price did it first – all of them good. The acting is great, filming was great, and I love the way they clear out New York.

Robert Neville is a brilliant scientist, but even he could not contain the terrible virus that was unstoppable, incurable and manmade. Somehow immune, Neville is now the last human survivor in what is left of New York City, and maybe the world. But he is not alone. He is surrounded by “the Infected”-victims of the plague who have mutated into carnivorous beings who can only exist in the dark and who will devour or infect anyone or anything in their path. For three years, Neville has spent his days scavenging for food and supplies and faithfully sending out radio messages, desperate to find any other survivors who might be out there. All the while, the Infected lurk in the shadows, watching Neville’s every move, waiting for him to make a fatal mistake. Perhaps mankind’s last, best hope, Neville is driven by only one remaining mission: to find a way to reverse the effects of the virus using his own immune blood. But his blood is also what The Infected hunt, and Neville knows he is outnumbered and quickly running out of time.

Let us know some of your favorite end of the world movies in the comments below!