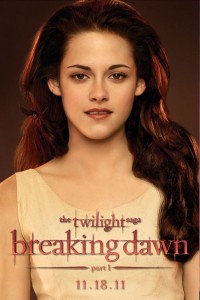 I try to make a consistent effort to go into every movie with a positive outlook. I tell myself, “Sure, the trailers look awful, and everything I’ve glimpsed online tells me that sitting through this will be similar to holding a palaver in the sixth circle of hell, but damn it, I’m giving it a shot.” However, with the Twilight saga, I’m like a child with a hot stove, I know if I touch it again, I’ll get burned. Luckily, Breaking Dawn Part 1 was not a letdown, it was just as awful as I had imagined, maybe even worse.

Breaking Dawn Part 1, brings us back pretty much where we left off, with Bella about to get married to her hunky sparkling vampire, Edward. This, of course, offends brooding Native American werewolf, Jacob, because it’s pretty obvious he has the better abdominal section, and why wouldn’t that be your top choice in a spouse? Thankfully for Bella’s sake, the wedding goes off without a hitch, and she can be the first 18-year-old girl to make a bad decision about getting married.  After a quick stop in Rio, Edward takes Bella to Isle Esme, his family’s private island (because every vampire needs a private tropical island), where the couple proceed to get busy in one of the most awkward and comical love scenes to ever be filmed.  Now is time for a bit of a warning, I am going to indulge in a bit of spoilers.  So, you have been warned, don’t complain at me if I say too much.

After their romp, which leaves both the room and Bella a bit decimated, Edward has decided the couple can no longer have sex, because he could hurt her. It seems like Bella likes it a little rough, and continues to try and seduce her husband, who despite waiting a hundred years to have sex, was sated by a single night.  Things get a bit complicated once Bella forcibly throws up a lunch she has created for herself, and realizes she hasn’t had her period in two weeks. Edward pretends that this isn’t news to him, and instead starts to freak out at the possibility that he has put a demon in her belly. His suspicions are confirmed by his housekeeper who by all appearances is an expert on the mating between a vampire and a human.  After informing Edward he has brought death upon his new bride, she then proceeds to see Jesus in a piece of French Toast. (OK, so that didn’t happen, but it should have.)

Now that we are halfway through the film, we have finally reached the conflict of the plot. Having now wiped out the plot about abstinence by getting married, the story quickly turns to a pro-life morality tale. Edward, like most new fathers, freaks out about bringing a life into this world, and believes it to be demon spawn.  The rest of the story becomes a fight between those who wish Bella to keep the child, and those who look upon it as a threat. Can you guess how it will end?

To say that the majority of Breaking Dawn Part 1 is absurd would be a drastic understatement. Characters routinely spout cliches at each other with sincerity that can scarcely be believed.  Although, that is the type of absurdity that we’ve seen out of the series, and it is what is expected.  It would be naive to think that type of absurdity would be missing from the final two films of the series. However, it goes well beyond overly sincere cliches, and moves into comical wolf pack meetings (with the worst voice over acting you’ve ever heard), blood shakes in styrofoam cups, vampires chewing a baby out of the womb, and falling in love with a baby on first sight. It made me wonder if you could parody something that already seems to parody itself.

The acting stays on par with the rest of the films, Kristen Stewart continues to look constipated and worried, Taylor Lautner continues to be brooding and angry, and Robert Pattinson stays boring. Both Stewart and Pattinson have shown decent performances outside of the the Twilight saga, but continue to look like they are going through the motions in the roles that made them famous.  Lautner continues to prove to me that despite being very good looking, doesn’t currently have what it takes to be a serious actor. Most of the rest of the Cullens are serviceable, with Ashley Greene and Nikki Reed serving up possibly the best performances of the bunch.

The worst acting comes from Jacob’s wolf pack, whose acting skills are on par with a weekend high school production of Death of a Salesman. Despite the fact that she is only in the film for maybe a minute, Maggie Grace gives possibly the most appalling performance of the night as one of the Cullen’s veggie vampire friends.

The main problem with Breaking Dawn Part 1 is that not much happens. When the final Harry Potter film was broken into two parts, it was done to tie up many loose ends, and give the story a final sendoff in a way that allowed for plenty of reflection. It doesn’t appear that Breaking Dawn had as much material to get through, and it shows easily. The splitting of the story into two feels like a blatant money grab, which I doubt anyone will deny it is. (Actually, I take that back, plenty will argue it is not.)

Despite it possibly being one of the worst films I’ve seen this year, it will do well in theaters, and fans will be pleased. I espoused plenty over the past few years how I believe the films and books hold no intellectual value, and are on par with cheesy Harlequin romance novels. This may be, but I’m sure there is plenty that holds no value that I adore, and so I have no foot to stand on. My only wish is that the films could find a way to change the pacing a bit, to make them a bit easier to access to people who aren’t already in love with the story.