“Yesterday Dr. Will Caster Was Only Human.” 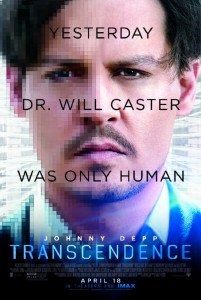 Chronologically, we have The Dark Knight Rises, Moneyball, Inception, The Dark Knight, The Prestige, Batman Begins, The Italian Job, Insomnia, Memento. Those are some very impressive credits. Although Transcendence director wasn’t at the helm for the aforementioned films, he was the cinematographer – and very influential on how they turned out looking. Needless to say, the directorial debut of a D.P. with that kind of resume is sure to get some attention. Unfortunately looks aren’t all that matter when it comes to making a film, and without a cohesive story and well-written script, things tend to fall apart. At least Transcendence looked good, right? I wish I could say it did. With a background like Pfister’s, the movie should have been visually better than simply complacent.

Dr. Will Caster (Depp) is a world-renowned scientist in the field of Artificial Intelligence, or AI. His life’s work has lead to his most important project, a sentient computer code-named PIMM. While there are those who strongly support the work Dr. Caster is doing, there are many who fear this type of computer intelligence – mainly a group of extremists called RIFT (Revolutionary Independence From Technology). What they are afraid of is “Transcendence,” defined as an existence or experience beyond the normal or physical level. During simultaneous attacks on AI labs across the country (don’t other countries have AI research too?), Will is shot with a radiation-laced bullet and given only weeks to live. His wife and fellow researcher Evelyn (Rebecca Hall) decides to apply the research of uploading the consciousness of rhesus monkeys and apply it to her dying husband. With the help of Max (Paul Bettany), Will’s mind lives on… or is it really Will?

The problem with the film does not lie in the far-fetched plot, or impossible nature of using technology in this matter. The film is science-fiction, after all. Yet the main problem lies in how the film tries to be so smart, while never reaching the level that it thinks it does. There was a film that just came out last year that was a perfect allegory and social commentary on our current dependance and addiction to technology. It is called Her, which is very human and personal, while getting a similar message across. The polar opposite of Transcendence‘s cold and lifeless story, which seldom makes any connection during it’s boring narrative.

Johnny Depp is one of the greatest actors of all time. His ability to get into a role, and become the character is impressive. Which is unfortunate for his latest film, because it just doesn’t happen. Or rather, Depp is never really given the opportunity to. There is nothing really special about Will Caster, as he is just kind of a boring scientist. And when he becomes a computer, his performance becomes as rigid and robotic as necessary. It isn’t that Depp does a bad job in the role, but rather he is never given the chance to shine. Having him as the lead in the film is nothing more than a credit, and isn’t enough to put the film where it needs to be.

Rebecca Hall gives a great performance, and is probably the best part of the film. She is even joined on-screen by several talented actors from the Nolan “troupe,” like Morgan Freeman and Cillian Murphy. Yet even with all the star-power, the film remains dull. Simply put, the actors just aren’t given anything to do. Writer Jack Paglen’s first screenplay is dull, from the dialogue to the action sequences.

Probably the biggest disappointment with Transcendence is the look of the film. Is it poorly filmed and put together? No. But the director, the man with the vision, is the Academy-award winning cinematographer for Inception. Pfister photographed Momento, The Prestige, and the Dark Knight Trilogy for crying out loud. It goes without saying that the audience is going to expect some interesting scenes. Unfortunately the shots are just run-of-the-mill, in this standard looking movie.

With all the anticipation surrounding the film – everything from the directorial debut of Wally Pfister, to the concepts and big names in the cast – Transcendence is truly a letdown. It is easy to see what they were trying to do with it, and there are some good ideas in there somewhere. But the execution was seriously flawed, and what should have been compelling ends up feeling ultimately boring.

Transcendence is a D+