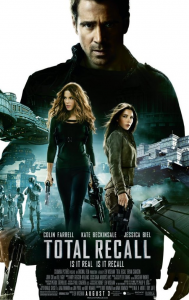 If you are a fan of 90s sci-fi / action movies, you will most likely have fond memories of a 1990 film starring Arnold Schwarzenegger called Total Recall. Fast forward to present day and a re-envisioning starring Colin Farrell is hitting theaters, based on the same source material by Philip K. Dick. Although there are certainly some differences from the original, the premise is basically the same. And unfortunately this updated version leaves you wanting to go to Rekall yourself – and implant memories of the original back into your head.

Douglas Quaid (Colin Farrell) is a factory worker who builds robot police officers on an assembly line for the United Federation of Britain. Unlike the original film which takes place on Mars, the story takes place on Earth. And there are only two inhabitable territories left: The aforementioned UFB and the Colony. Tired of his repetitive job and living cramped like sardines in the Colony with his beautiful wife Lori (Kate Beckinsale), Quaid decides to visit Rekall – a place where you can forget about your boring life and have memories of your greatest fantasies implanted into your brain. Fate leads him to the memories of a secret agent, which happens to awaken real memories that have actually been suppressed by the government. Quaid suddenly finds himself surrounded by police officers, only to take each of them out in one single circular camera-shot. He soon discovers that his life is nothing that he thought it was, and fights to find an explanation from people who took it away from him.

The problem with Total Recall is not a lack of action. From the time that Quaid discovers that he is really a secret agent it is pretty much relentless. But what the film lacks is a soul. I found myself watching spectacle after spectacle of high speed chases and explosions, narrowly escaping crashing elevators and elaborately choreographed fight scenes. But I also found myself not caring about what happens to the characters, which you never really find a connection to. Colin Farrell is a tremendous actor, but it seems like he is never given a chance to really show his talent. The same goes for Bryan Cranston, who plays a two-bit bad buy trying to take over the world. Kate Beckensale does a good job with the Underworld type of the action that she is accustomed to, but her character is nothing spectacular. The same goes for Jessica Biel, who plays the love interest of Farrell’s real memories.

The set designs are incredible, and the visuals are probably the best thing about the film. The world is a mash-up of “Bladerunner” and “Minority Report,” also Philip K. Dick stories, and is a spectacular site to behold. Where things start to break down are during most of the action sequences, when shots stray from the brilliant sets to obvious CG. The reason why the original Total Recall, Blade Runner and other action films of the 90s looked so realistic is because they actually were. But special effects have gone to computer generated effects, and leave most films lacking a certain physicality. I wish that more directors would take a page out of the Christopher Nolan playbook, and shoot as much as possible without green screens.

Far too many times during the film is the audience left feeling disconnected, even during impressive action sequences that mean life or death for the protagonists. More often than not I couldn’t make myself care about their fate, nor was I relieved when they narrowly escaped danger time after time. With a running time of almost two hours, they should have spent more time developing the characters and story than trying to cram in as much action as possible. It is often times hard for a remake to beat the original, and this is no exception to the rule.

Total Recall is a C-