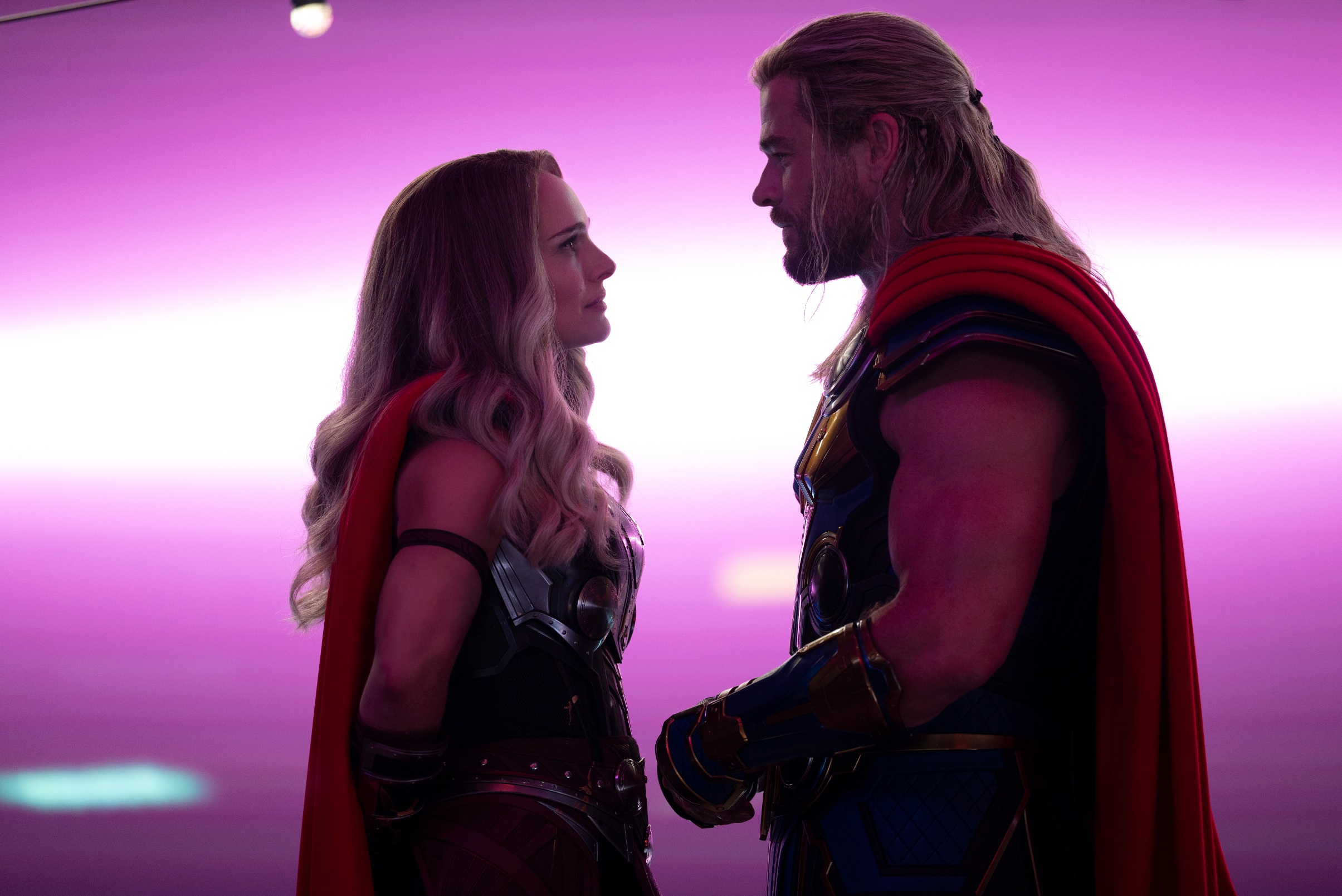 When we last saw Thor (Chris Hemsworth), he was hitching a ride with The Guardians of the Galaxy after helping to defeat Thanos in Avengers: Endgame. After spending much of that film in a depressed state, we find out early in Thor: Love and Thunder that he was ready to get back in shape – both physically and mentally – and seems to be back to his old self for the most part.

After receiving a distress signal from Lady Sif (Jaimie Alexander), Thor parts ways with the Guardians and discovers Gorr the God Butcher (Christian Bale) has vowed to kill all Gods after being betrayed by one of them. As he heads to New Asgard to check on King Valkyrie (Tessa Thompson), Jane Foster (Natalie Portman) discovers she has cancer and heads there as well to see if magic can offer a cure. Thor arrives to save the day, and finds Jane has become “The Mighty Thor,” harnessing the powers of Mjolnir. The three heroes are able to fend off Gorr and his shadow monsters temporarily, but not before he kidnaps all of the town’s children. They set off on a journey to stop the villain and save the kids before it is too late.

If you weren’t a fan of Thor: Ragnarok, this film is most likely not going to do much for you. Director Taika Waititi leans into the comedy elements even more in this one, resulting in a lot of silly fun. But just know you’re going to get way more jokes than action, and don’t expect to see the character to return to what we saw in the first two films anytime soon.

Something unique Waititi gives us here is the first Marvel romantic comedy. A lot of the film revolves around Thor and Jane’s relationship, as we find out what happened between the two of them that causes their break-up. We see flashbacks of them falling in love, and eventually falling out of it. It was an unexpected touch for an MCU film, and refreshing at that. It was nice to have the gaps filled in for those wondering what happened, and also made it that much more tragic when we find out how little time Jane has left. For as silly as Waititi can be, he is equally romantic and heartbreaking at times.

Chris Hemsworth is as charming and hilarious as ever, and it’s wonderful seeing Natalie Portman back in the MCU. We haven’t seen Jane in nearly a decade, and on top of that we get to see her as a superhero. The two of them are both great as they share the mantle of Thor, and it’s fun watching them work through this new dynamic while trying to also deal with their failed relationship and save the world.

The standout in the film has to be Christian Bale as Gorr the God Butcher. Over the past 14 years and 28 previous films, we’ve seen some fantastic performances from villians who want to destroy Earth. But never have we seen one as bone-chilling and terrifying as Bale’s in Love and Thunder. His character lives in the shadows, and the actor plays him like something out of a horror movie. The actor may not have the size of Hemsworth, but the performance he creates – along with the makeup and the way he is filmed – creates an equal match for our heroes.

Tessa Thompson returns as Valkyrie and is fantastic as always in the role. We see her character struggling with the mundane part of ruling a kingdom, when what she wants to do is be on the battlefield. Waititi also returns as the lovable Korg, who has been fighting alongside Thor since Ragnarok. He’s one of my favorite characters to come out of that film, and he does not disappoint here.

The quest to find a weapon strong enough to take on Gorr and his Necrosword (which gives him his powers) leads our heroes to find Zeus (Russell Crowe), in order to warn him and the other Gods of the impending danger. There’s been some disappointment from people unhappy with the way Crowe portrays the famous Olympian, but it’s an interesting performance – and Crowe is all in on hamming it up. I think it may lead to some interesting things, and I enjoyed it.

Although the film relies heavily on humor, there are still some really fun action sequences throughout. The fights are well-coreographed with clean, easy to follow shots. There are a couple of really good superpowered fights, and also one that we have never seen anything like in the MCU. Without spoiling anything, I’ll just say the way the sequence looks and is filmed feels like something out of a monster movie – and is stunning to behold. It’s great after all these years that they are still finding new ways to have these superheroes fight.

Thor: Love and Thunder is a fun ride, and often doesn’t take itself too seriously. If you are going in with the expectations that Taika Waititi is going to do what he does best, and embrace the silliness he brings to the table, you’ll be in for a good time. The action is still there, as well as some touching dramatic beats. It’s exciting not knowing what to expect from a formula that has felt stale at times, and I’m thankful we have filmmakers bring given the chance to create something as unique as this is.