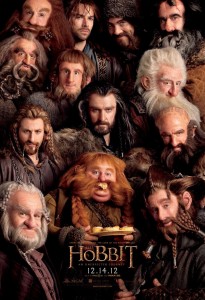 After almost 9 years of waiting, we finally return to Middle Earth in The Hobbit: An Unexpected Journey. There was a period of time where we weren’t sure what would happen with the film, or who would direct it. But it was inevitable in my mind that the only man worthy of helming such a project – Peter Jackson – would come to direct the three part project. But many questions remained to be answered before seeing the film. Why take the shortest book in the franchise and split it into three movies? Why shoot it in 48 frames per second, double the standard for filming? And will The Hobbit live up to expectations behind one of the greatest trilogies in cinematic history?

During Christmas time in 2001 through 2003, we had something to look forward to every year beside from presents under the tree. The Lord of the Rings trilogy is considered by many as one of the greatest trilogies of all time, right up there next to Star Wars and Indiana Jones. But there was a story before that story, written by J. R. R. Tolkien and revered by many as one of the greatest children’s books of all time. This story however did not center around Frodo, but rather his uncle Bilbo – and how he came to find the great ring that would eventually take us on the journey we all came to love. In The Lord of the Rings, Bilbo is elderly and a bit senile, but The Hobbit takes us back to the shire decades earlier when he was just a young man.

“We hobbits are plain, quiet creatures. Adventures make one late for dinner.” -Bilbo Baggins, The Hobbit: An Unexpected Journey

Much like the journey that Frodo was taken on in The Lord of the Rings, this one was quite unexpected by Bilbo Baggins (Martin Freeman). One day as the hobbit was sitting in front of his house smoking his pipe, he was approached by the wizard we have come to know and love as Gandalf (Ian McKellen). Little does Bilbo know that he has already been chosen to act as a burglar on his quest, due to the stealthy nature of hobbits. That evening, one by one, a series of unexpected guests arrive at his hobbit hole. Dwarf after dwarf, lead by Thorin Oakenshield (Richard Armitrage) eat, sing, and make a mess of the house much to Bilbo’s dismay. Eventually he learns of the cause of this interruption – a dragon named Smaug who has taken over their home of Erebor and left them to wander with no place to call their own. Under Gandalf’s direction, they mean to enlist Bilbo’s help to journey to the Lonely Mountain and reclaim what is rightfully theirs.

Martin Freeman does a fantastic job taking over the role of young Bilbo, who was played by Ian Holm in the trilogy. It is fun to see the character come out of his shell throughout the film – where at first he is guarded and uninterested in doing anything exciting – eventually making a grand transformation. Probably best known for his roles in The Office (BBC), Love Actually and the highly acclaimed series Sherlock, we are sure to see much more from Mr. Freeman in the future. Another actor who should be given much credit is Richard Armitage, who plays the leader of the company of 13 dwarves. The actor is probably best known for his work on the BBC series Robin Hood, and probably unknown from a small role in Captain America, but is sure to gain recognition after this film. Armitage is commanding in every scene he is featured in, and we will hopefully be seeing a lot more from the actor.

I am split in two when it comes to the subject of breaking The Hobbit into three films. The fan in me can’t wait to get three times the movies from a franchise that I never want to end. The practical part of me asks how you can effectively take a book with a word count of 95,000 and turn it into three feature length films – not to mention long ones (The Lord of the Rings novels were comprised of about half a million words, and were turned into three films). At times it certainly shows that Jackson is stretching the material – where although it is fun to see the world of Tolkien in great detail, it doesn’t always help with the pacing of the film. As a fan of the franchise I didn’t mind it so much, but I am sure that the average movie-goer will find themselves growing weary at times. Although the story is fun, it isn’t as epic as the LOTR trilogy – and therefore lacks the action that it’s predecessors so often gave us.

When it comes to the look of Middle Earth in The Hobbit – the sets, the characters, the costumes, the props – I love it all. Unfortunately, the way it was captured on film is what I am not a huge fan of. Peter Jackson decided that he would be the first to film a feature length film in 48fps (frames-per-second) – double the standard of 24fps that we all know and love. I am a huge proponent of technology, and am not the kind of person that fears change. But unfortunately, the higher frame rate just did not work for me. I love the look of film, and am so happy that digital cameras have advanced to the point of simulating that feeling. But 48fps filming completely takes away from everything digital has accomplished, turning a beautiful looking film into something that compares to a cheaply made for TV movie. When I saw the trailers for The Hobbit, The film looked as stunning as the LOTR trilogy did – if not even more beautiful. But that did not hold true as I watched the film moving in what looked like fast forward in a smooth, yet unrealistic speed. I may be in the minority, as many people pointed out the higher detail and less room for mistakes in the film. But to me, it just plain took away from the magic I look for when going to the movies.

Overall, The Hobbit: An Unexpected Journey is a fun adventure story. There are so many things I liked about it, from the great acting to the beautifully crafted world of Middle Earth. Of course it was adapted from a children’s book, so it is hard to expect it to live up to such an epic as The Lord of the Rings series. But unfortunately we have been jaded by the incredible job that Peter Jackson did with the trilogy, and it is hard not to expect something bigger and better from this new venture into the world of Tolkien. For fans of the franchise, there is much to enjoy about Bilbo’s story – I just wish it could have had the same spark the other films in the series did. With that being said, I can’t wait for part 2 next year and the conclusion in summer of 2014.

The Hobbit: An Unexpected Journey is a B-