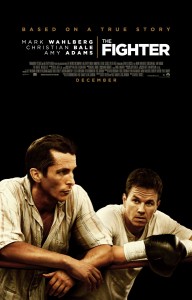 “The Fighter” is based on true story of boxer Mickey Ward, and the struggles he faced along the road to becoming a champion. While dealing with problems at home with his family, as well as with a drug addicted brother as his trainer, Mickey is an unlikely hero that constantly has the odds going against him.

Director David O. Russell (I Heart Huckabees, Three Kings) does something very interesting with this boxing movie, that makes it really unique when compared to others in the same genre. Mickey (Mark Wahlberg) is constantly surrounded by people that seem to take over the screen during the film, and sometimes you forget that the movie is about him. Mickey’s brother Dicky Eklund (Christian Bale) is known as the ‘Pride of Lowell,’ for having knocked down Sugar Ray Leonard at one time. Now addicted to crack, HBO is filming a special on how drugs ruin lives – which Dicky thinks is all about his big boxing comeback. Micky also has 7 lively sisters, along with a mother (Melissa Leo) as a manager. With all of this going on, Mickey is almost destined to fail. But when he meets a fiery red-headed bartender named Charlene (Amy Adams), things start to turn around for the best. Mickey realizes that he is never going to achieve his goals while trapped in Lowell.

Mark Wahlberg fits the role well as the up-and-coming boxer, but at times it doesn’t appear that it is takes much effort. During many scenes, it’s more like we are watching Wahlberg becoming a professional boxer – rather than betraying the person who the story is based off of. Hands down, Christian Bale really steals the show. The actor dropped a ton of the weight that was necessary to portray the crack-addicted welterweight boxer, which was reminiscent of the 60 lbs. he lost for ‘The Machinist.’ But not only does he look the role; In ‘The Fighter,’ Christian Bale becomes Dicky Eklund – and pulls off the role seamlessly. His performance is truly one of the best this year, and is my choice for Best Supporting Actor at the Academy Awards this year. Another standout actor in the film is Amy Adams, who really puts her heart and soul into the role of Ward’s girlfriend Charlene. I can only imagine how hard it would be to stand up to 8 loud and obnoxious women who think you’re the enemy, and Adams really personifies the spirit and tenacity it would take to survive the situation.

The boxing scenes are different than those of other films that stand out when I think about others about the sport. They seem to be a bit more raw, which is an interesting point of view. They definitely aren’t as flashy as those seen in “Rocky,” or as cinematically beautiful as “Raging Bull” – but it’s ok. The fight scenes appear to be more real, like an actual boxing match that you would see on television. And that makes them kind of neat.

“The Fighter” is a great film, and tells an amazing story that will be new to many of it’s viewers. With an incredibly talented cast that really makes you feel something for the characters, it is a unique view into the life of a professional boxer who has the odds truly stacked against them.

The Fighter is an A