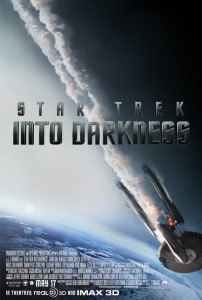 If the first in the new series of Star Trek films were its infancy, and eventual baby steps into a full-fledged series, Star Trek Into Darkness is its riotous teenage years.  These teenage years filled with untold amounts of emotions boiling to the surface range greatly, but all are a necessary step into finding its true character. The tumultuous ride is one that can only hope to top the acclaim achieved by the first film when it was release over four years ago.

Taking place not long after the events of the first film, Star Trek Into Darkness reunites us with the crew of the USS Enterprise as they are on assignment on the planet Nibiru. The planet is in the early stages of its civilization, and Kirk (Chris Pine) creates havoc as he allows them to see a starship on his way to save Spock (Zachary Quinto), who is trying to save the people of the planet. Unfortunately, while this is the correct moral choice, it is not in accordance with the law of Starfleet, and the brash Kirk once again lands in trouble. He is demoted to first officer, and is once again under the command of his mentor, Christopher Pike (Bruce Greenwood).

After a sudden attack by one of their own, Starfleet is thrown into disarray, and Kirk and the Enterprise go on a manhunt to bring the terrorist, John Harrison (Benedict Cumberbatch), to justice. Harrison isn’t what he seems, and the Enterprise might have bit off a bit more than they can chew.

Abrams picks up right where he left us with the original film, and never skips a beat along the way. The characters that were the highlight of the 2009 film, are back and fleshed out even more in the sequel. Kirk and Spock are still dealing with many of the same problems, but have leaped forward in others. This story focuses mainly on the progression of the friendship between these two main characters. Quinto and Pine don’t stick to the same defined roles given to them by Nimoy and Shatner, but the series is better for this. Purists of the Trek series might find it a bit oft putting, but for most fans and especially the casual viewer it is much appreciated. They easily slip into their roles, and stay far away from imitations of their counterparts. This allows for natural performances and chemistry that stick to the spirit of the original series and films.

Joining them this time is Benedict Cumberbatch as the film’s villain. If there is one thing that Star Trek Into Darkness does better than its predecessor, it is the creation of the villain and the casting of Cumberbatch. Smart and capable evil is much more entertaining to watch than the brute vengeful evil of the first film. Cumberbatch has the makings of a great villainous actor, some might even point out the quality of his voice is very similar to Alan Rickman, another actor who has embodied some great silver screen villains. One would hope that this will not be the last we see of the character.

One of the draws of the last film was the supporting cast that added a lot of life to the Enterprise, and help keep the story moving at a great pace. This film relies on the same formula, and reaches just as high of points, all while continuing to endear us to new actors who have the unfortunate difficulty of stepping into the roles of pop culture icons. The film uses many of these characters as fan service to the many Star Trek fans, but it could also be said that there is no Star Trek without these characters.

Visuals are as eye popping as ever. Abrams continues to overuse his trademark lens flare, but beyond that the set pieces are beautiful, the action CGI is flawless, and the photography work is a step above many other summer blockbusters. The 3D was done well enough that it might be worth the extra couple dollars to experience it in that format. The visuals never come at expense of the story, and help keep it visually engaging enough that the run time seems much shorter than a two hour film.

Star Trek Into Darkness may not please all fans, but will most likely engage new fans of the series, as well as those who don’t mind an alternate take on the universe. The second installment all but guarantees that it might be one of the best franchises currently out there.