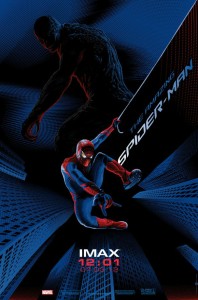 It’s hard to believe that is was barely 10 years ago that the first Spider-Man film was released. Here we are a decade later and we already have a reboot, new cast and a new director. I will admit, Spider-Man is one of my favorite superheros of all time, and I loved the first three films of the new millenium (I even enjoyed Spider-Man 3). But what director Marc Webb’s version offers is a well polished look at the franchise, pulling several aspects from different versions of the comics, and actually gives us a fresh take on the story we know and love.

The story starts off with a young Peter Parker (Max Charles) playing hide-and-seek with his father, Richard Parker (Campbell Scott). What Peter finds instead is his father’s office ransacked, with the window broken and papers everywhere. When his parents see what has happened, they immediately start to gather their things and take Peter to stay with his Uncle Ben (Martin Sheen) and Aunt May (Sally Field). That would be the last time that Peter sees his mother and father, and why they left him and disappeared so abruptly would remain a mystery – for now.

Fast-forward to present day, and Peter Parker has grown up to be the lovable high school outcast that we have come to know. Flash Thompson is still giving him trouble. He is awkward when it comes to talking to girls. And he is going to be bit by a spider and gain superpowers – we just know it. Most of what we see in this origin story feels familiar, but there are slightly different twists in this version. For starters, instead of Mary-Jane Watson, Peter’s high school love interest is Gwen Stacy (Emma Stone) – staying true to The Amazing Spider-Man comics. And when it comes to being bitten by the spider that makes everything possible, the story leans toward the Ultimate Spider-Man story-line that revolves around Oscorp. The entire film is a hybrid, comprised of what I would call the best parts of each of the comic series.

It was nice that the writers decided to give us a new villain, rather than rebooting with one of the ones we have already seen. Dr. Curt Connors (Rhys Ifans) is a scientist and head researcher at Oscorp. Peter learns that Conners and his father worked closely together, so he sneaks his way into Oscorp to try and talk to him about his parents. There he learns that Dr. Conners is studying reptile DNA – mainly in an attempt to replicate the way it can heal entire limbs that are severed – so that he might some day gain back the use of his right arm that he lost. We learn that a mysterious Norman Osborne, who we never fully see, is dying for reasons that are not explained. This rushes Connors’ research, and forces him to take human trials upon himself. What first appears to be a miraculous healing of his arm soon spreads to his entire body – transforming him into The Lizard.

The film has a darker, more gritty tone than the previous trilogy. Marc Webb took a page out of the Christopher Nolan playbook, and decided to reboot the franchise with a serious feel like Batman Begins. And I commend him for doing so. Sure, I loved the last three movies. And sure, they were light-hearted and fun. But at times they get a bit goofy, and are harder to appreciate from an artistic standpoint. The Amazing Spider-Man looks incredible, and takes the franchise as seriously as any fan could ever hope for. Andrew Garfield does a fantastic job as Peter Parker, and comes across the way you would expect the wise-cracking teenager would. I always felt that Tobey Maguire came across well as Parker, but wasn’t as believable as Spider-Man. This is where Andrew Garfield comes in. I felt that his portrayal of both personas was great, and he was believable in both roles. I also really enjoyed watching his awkwardness / chemistry with Emma Stone. I think the fact that both actors were closer in high school age to their predecessors helped as well.

Thankfully The Amazing Spider-Man was shot completely in 3D, so we didn’t have to sit through a messy post-production conversion. I feel that the technology has been perfected enough that it finally doesn’t take away from the film itself. And in this case it actually made the web-slinging more fun. Credit has to be given to the amazing job that the visual effects artists did with the movie. Everything from entirely computer generated sequences to individual effects and characters that were done in CG were spectacular. Even The Lizard, which you have to appreciate how hard it is to make look believable, turned out pretty good. And if you told me that someone was actually swinging around New York City in a Spider-Man costume for most of the scenes, I might just believe you. That is how good the character looked on the big screen.

Reboots are a difficult thing to pull off, especially the ones that have such a huge following and high expectations from fans. In the case of the Batman franchise, I can understand why it was time for a change. But with the last ‘Spider-Man’ only coming out 5 years ago, it initially appeared as nothing more than an attempt to keep the rights to the character in Sony’s hands. But upon further evaluation, what Marc Webb did was beautifully execute a re-imagining of a beloved character and franchise, and took it seriously enough to create a fantastic new film. With a great cast and spectacular visuals, I am happy to see Spider-Man swinging back in full form.

The Amazing Spider-Man is an A-