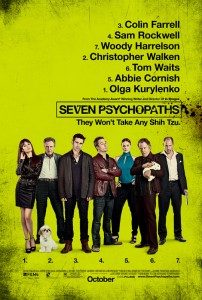 It has been a while since the last time I’ve seen a movie with an all-star cast that isn’t just for show. True Romance; Pulp Fiction; and now Seven Psychopaths. Written and directed by Martin McDonagh, who brought us In Bruges, the script is excellent and wonderfully acted by a superb cast. It has a clever and unique way of keeping you guessing as to what is actually going on – and that’s nothing but a good thing.

Marty (Colin Farrell) lives in Los Angeles where he does pretty much two things: drinks, and tries to finish a screenplay. His lifestyle brings him nothing but trouble when he can hardly remember what he says and does, eventually leading to a fallout with his girlfriend Kaya (Abbie Cornish). His friend Billy (Sam Rockwell) is there to help him where he can, giving him a place to stay and ideas to finish his script for a film called “Seven Psychopaths.” Billy’s day job revolves around kidnapping dogs from wealthy owners, and giving them to his older friend Hans (Christopher Walken) who turns them in for reward money. This get’s the lot of them into trouble when they kidnap the prized possession of mobster Charlie Costello (Woody Harrelson) – a shih tzu named Bonny. Violence ensues as Costello takes out anyone in the way of getting his dog back – while the main characters cross paths with several psychopaths along the way.

I love the sort of nonlinear story-telling that McDonagh does in the film, which keeps you guessing from beginning to end. You never really know where the film is going, and at times what kind of film you are actually watching. But both of those things are what make Seven Psychopaths so good, and the cast pulls off the quirky story brilliantly. The dialogue is fantastic, and, in the context, is hard not to remind you of a Tarantino film – without being a knockoff or being too forced. It really has a style all of its own.

Colin Farrell and Sam Rockwell have a great chemistry together, with Farrell playing the straight character and Sam Rockwell completely off his rocker. Rockwell is one of those actors who I’m so glad is becoming more mainstream, as he is an incredible talent with a great range. He effortlessly steals just about every scene he is in, or at least comes in at a tie with Christopher Walken. It is hard not to smile with every line that Walken delivers, in a way that only he can do. It is great to see him in something current, as I feel he has been kind of hidden away until now. That was a huge mistake, seeing how great he is in this film.

I’ve always liked Woody Harrelson, but he has really became one of my favorite actors as of late. Talk about range, this guy does it all. And I can’t help but be completely fascinated to watch everything he is in. I remember seeing him in No Country For Old Men, then Seven Pounds, and really enjoying those roles. Pretty much everything after has been great, and seeing him as psychopath mobster Charlie Costello is no exception. He plays a man that is so insane and violent, yet so in love with his dog, that you can’t help but to laugh almost every time he opens his mouth. He pulls off the role only as Harrelson can, and it is nothing but fun to watch.

Seven Psychopaths is a hard movie to slap a label on. If you want to compare it to something you know, think Reservoir Dogs meets Snatch – pulling in the best elements of both but coming off fresh at the same time. It is one of the most unique films I have seen in a long time, and I absolutely loved it. From the quirky characters to the fantastic script, it will keep you guessing and wanting to come back for more.

Seven Psychopaths is an A.