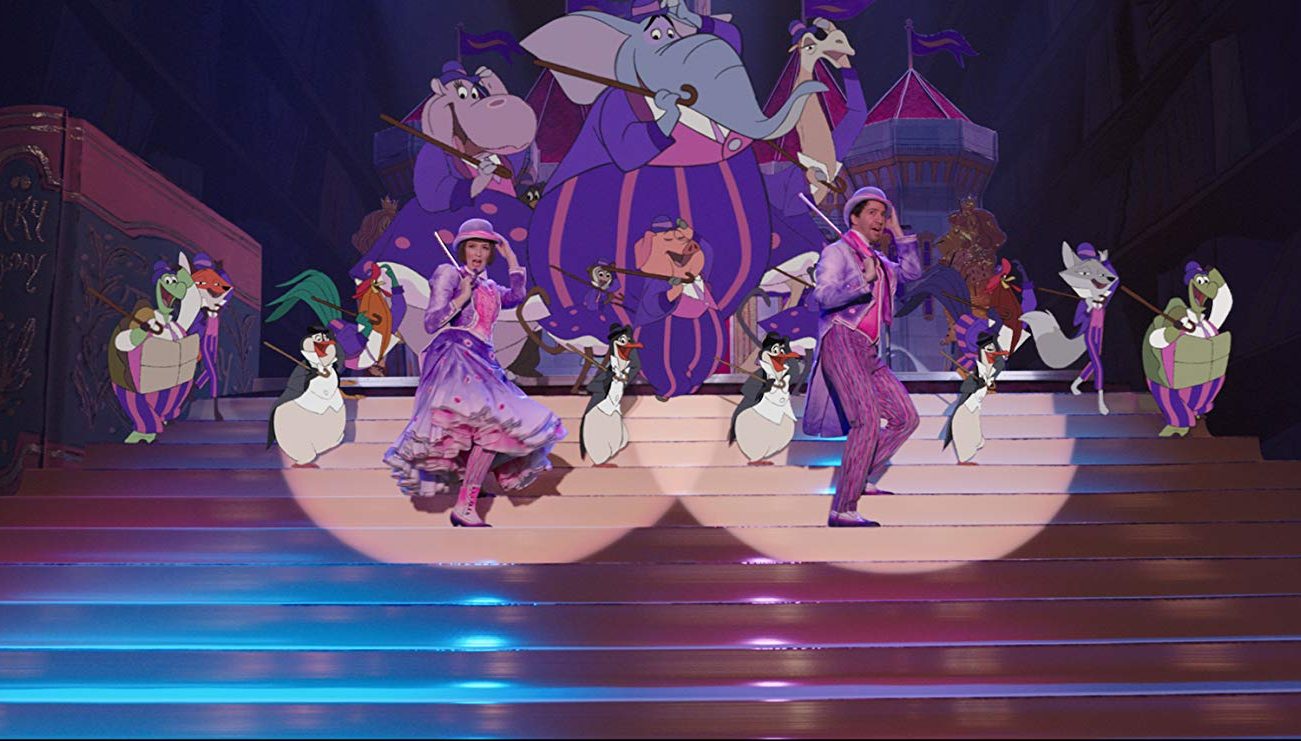 In Mary Poppins Returns, Emily Blunt is tasked with the impossible – filling the shoes of the legendary Julie Andrews.

Based on the popular series of children’s books by P.L. Travers, Disney brought Mary Poppins to life on celluloid in 1964. It was there that Andrews would immortalize that character, and create what would become a film and performance beloved by audiences for generations to come.

54 years later, Disney has finally released a sequel to the classic musical. Emily Blunt, who excels in dramatic roles and only has one credit in a movie musical – Into the Woods – leads us on another adventure. We learn early on that Bert is off traveling the world, but we are given the talented Lin-Manuel Miranda (the creator of Hamilton) as a fine replacement as Jack the lamplighter (or a “leerie” as the film refers to them).

The film is a true sequel, taking place twenty years after the events of the first film. The Banks children, Michael (Ben Whishaw) and Jane (Emily Mortimer), are all grown up. Michael now lives at 17 Cherry Tree Lane with three children of his own, unfortunately having lost his wife. Struggling to pay the bills, we discover that the new Mr. Banks is behind on his loan payments and at risk of having his house repossessed. Unless he can come up with the funds to pay off the loan, he and the children will be homeless by Friday at midnight.

This is where good ol’ Mary Poppins comes in.

As the Banks children are playing at the park, Georgie (Joel Dawson) sees his father’s old kite flying around and chases it into some bushes. As he begins to fly it, the wind becomes violent and starts to lift him into the sky. Jack sees him and saves the day, and the two of them reel in none other than Mary Poppins. The children return home with their new nanny, who tells Mr. Banks that she will take the job he never asked to have filled. As Michael tries to come up with the funds to save the family’s home, Mary takes the children on an adventure of fun and imagination. 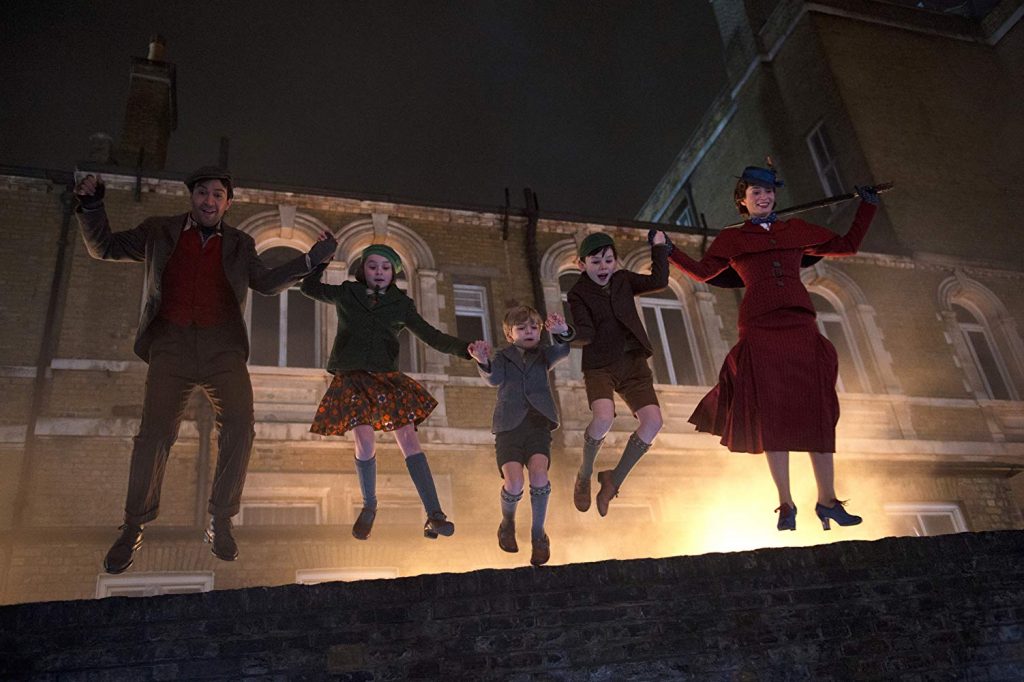 There are three elements that make the original Mary Poppins great in my opinion. They are: Julie Andrews, the Sherman Brothers songs, and a fantastic script (in that order). Unfortunately, this film has none of these, and therefore is automatically at a disadvantage. That is not to say that there are no redeeming qualities; the film is fairly entertaining, with lots to take in. However, it never crosses the threshold into the territory of becoming a classic.

In the original, Mary reads off the list of qualifications that Michael and Jane request for the nanny job. “Item one: a cheery disposition. I am never cross.” This is how I think of Mary, and I’m sure countless others have for decades. However, it seems that Blunt goes for the exact opposite with her portrayal, and it is very jarring. I understand that the nanny in the books is much more serious and strict, but this isn’t a sequel to the books. This is a direct sequel to the beloved film, in which Julie Andrews made audiences fall in love with the character for over half a century. So if they decided they would take the same character from the original movie and apply the characteristics from the book, it was a poor choice.

As much as I adore Emily Blunt as an actor, and think she is fantastic in dramatic roles, I believe she is wrong for this part. I would much rather see someone else like Kristen Bell in the role (who we know can sing – see Frozen – and even starred in a Mary Poppins parody for Funny or Die ). Blunt’s performance feels so forced and rigid, lacking the genuine elegance of Andrews. But I can’t help to think that the script is partly to blame, changing the character to someone we did not expect to see on the big screen. 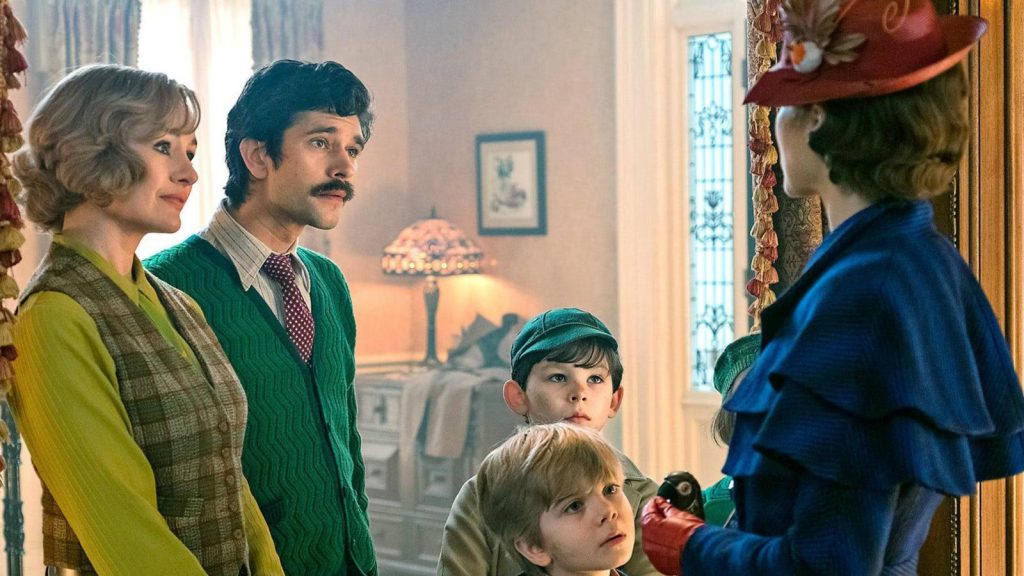 Lin-Manuel Miranda is a welcomed addition to the film, and I found myself often waiting for him to show back up. The best sequence in the entire film is when he and Mary take the kids into a classically animated, 2D dream world that lives inside of one of their mother’s ceramic bowls. Their trip to this magical circus is fun and fantastic, and Miranda gets to put his rap skills to good use. It’s a really fun sequence, as well as a nice homage to the original.

Colin Firth plays the head of the bank which Michael works for, and that his father used to be a partner in. It’s a mustache-twirling role (although he is clean-shaven), but the accomplished Firth does a fine job with what he is given.

Meryl Streep makes an appearance for another one of the other enjoyable numbers in the film, playing a cousin of Mary’s. And Dick Van Dyke even gets a cameo, proving he still has “it.” 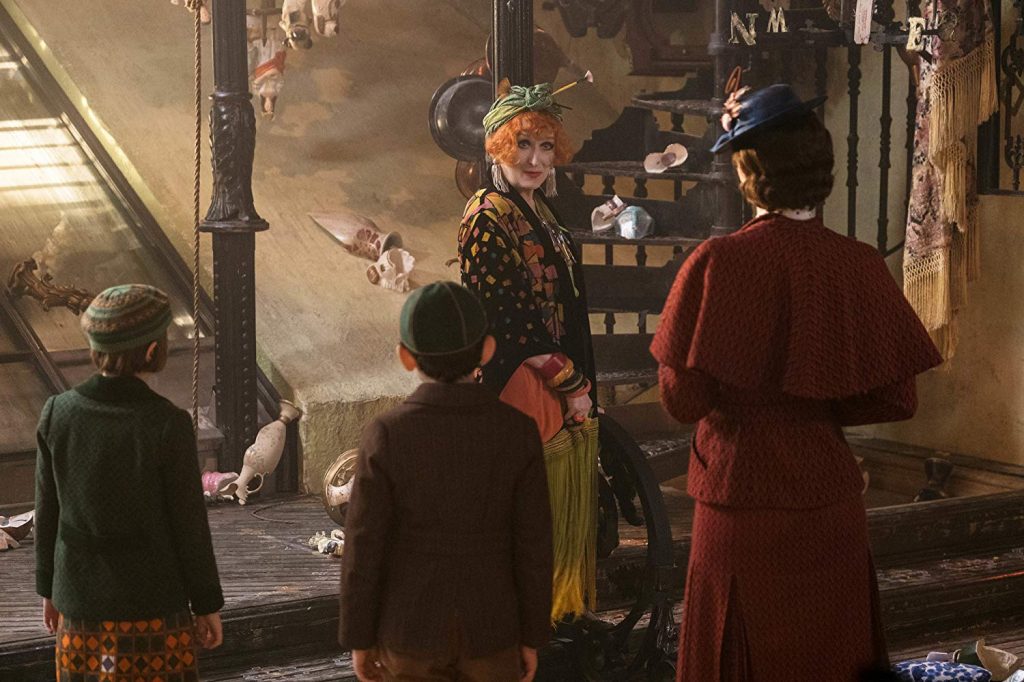 Here’s the real problem with the film though, skipping right over a generic script with several frustrating plot devices: the songs are forgettable.

As someone who appreciates the 1964 film, but never loved it growing up, I can honestly say that the songs are magnificent. Having only seen the original a handful of times, I can list off song after song, remember what they sounded like, and tell you what happened during each number. Unfortunately, I left the theater after seeing the new film and couldn’t tell you what one song sounded like or any of the words. I could vaguely remember the settings for some of the songs, yet searched and searched for lyrics and melodies that never came.

There is no doubt in my mind that kids and adults alike left the original Mary Poppins singing the songs and buying the album to play on repeat. But I feel like there isn’t even one song in the film that has what it takes to become a classic. The closest also features Miranda, in a show-stopping number with him and the other leeries. It’s the closest we get to a big Broadway number, and it was fun to watch. But, again, I have no recollection of how it went. 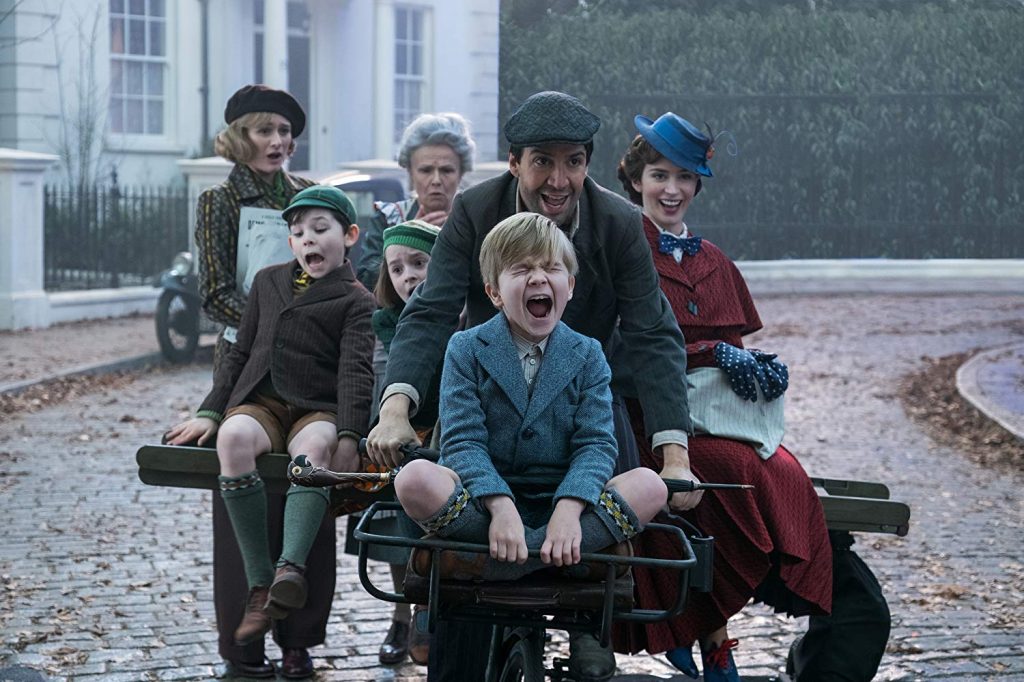 Mary Poppins Returns had a lot to live up to, and I wish I could say that it was up to the task. I think the original is brilliant, and one of Disney’s greatest live-action accomplishments. It is entertaining enough to pass the time, and kids will have a fun time with the colorful visuals and wacky situations. But at the end of the day, the film is a holiday that could have used a lot more jolliness – especially from Mary – and much more memorable songs. There isn’t enough sugar to make this one go down right with me.