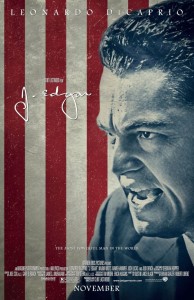 Just kidding, J. Edgar wasn’t in 3D – but it probably would have been more interesting if it had been. J. Edgar is Clint Eastwood’s newest biopic about the architect of the Federal Bureau of Investigations, J. Edgar Hoover (Leonardo DiCaprio). The film’s excellent actors, legendary director and fascinating source material ultimately fail to live up to the sum of its parts.

Told in a series of flashbacks, J. Edgar opens with J. Edgar Hoover dictating the formation of the FBI and his ensuing legacy. The story is undeniably epic. Spanning 8 US Presidents, the Bolshevik Revolution, the Great Depression, World War II, McCarthyism, the kidnapping of the Lindbergh baby and the assassinations of John F. Kennedy, Robert Kennedy and Dr. Martin Luther King, Jr. – Hoover was there for all of it…and he was probably gay.

While the movie has all the makings of an Oscar-level masterpiece, it still falls short – perhaps for that very reason. J. Edgar comes across as a very “paint-by-numbers” Hollywood biopic. It takes great actors and weaves them into an epic story of a public figure while illuminating the lesser known aspects of that character. J. Edgar relies so much on the theory that he was a closeted homosexual that unless the viewer is riveted by that particular element of the story, the film almost becomes boring. There are however, genuinely riveting aspects of the film that involve the professional work of J. Edgar Hoover (even 80 years later, everything about the Lindbergh baby is still fascinating).

The weakest part of the film is something that theoretically shouldn’t even be recognized…the make-up. Because the same actors play roles that age 50 years from beginning to end, the aging effects account for a large part of the film. In the later years, DiCaprio’s Hoover looks more like a mix of Jon Voigt and Charles Foster Kane than the titular J. Edgar and Armie Hammer’s face as Clyde Tolson becomes so caked with make-up and prosthetics that the viewer can’t even recognize a change of emotion.

J. Edgar doesn’t seem to be a movie that will appeal to mass audiences. If you’re a big fan of period biopics or of J. Edgar Hoover himself, you owe it to yourself to at least form your own opinion. For the rest of you, I can’t in good conscience say that I think you’ll walk away saying anything but “meh”.