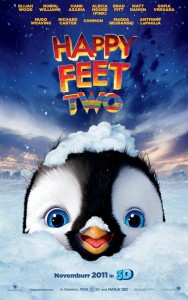 Going into a film like Happy Feet Two, you pretty much know what you can expect. It is not uncommon for sequels to kid’s animated movies to be lackluster in comparison to their predecessors, and in this case that is exactly what this film does. When a movie about singing and dancing penguins doesn’t have enough singing or dancing – you know you are in trouble.

Happy Feet Two takes place in the not-so-distant future after the first film ends. Mumble (Elijah Wood) and Gloria (Alecia Moore, AKA P!nk) are all grown up, and are married with a son of their own named Erik (Ava Acres). Like his father, Erik is awkward compared to his peers, and doesn’t sing or dance. Luckily for the young outcast, he has a couple of close friends named Atticus (Benjamin “Lil P-Nut” Flores Jr.) and Bo (Meibh Campbell) who stick with him through thick and thin. When the three run away with serial troublemaker Ramon (Robin Williams), they stumble upon a gathering of penguins who are worshiping a “flying penguin” named Sven (Hank Azaria). Erik gets the idea stuck in his head that he too can fly, and the penguins are forced to try when they get into trouble with icebergs shifting and trapping them without food.

The original Happy Feet movie was a great kid’s film, and was the kind that could keep parents pretty well entertained.  Their was great music, a fun story, and of course it was pretty original. Learning about the culture of penguins who sing and dance is a fun concept.  But when it comes to the sequel, it just seemed lackluster.  The songs were ok; there were some pretty clever lyrics like “we’re bringing fluffy back” parodying Justin Timberlake – but most of the good ones were seen in the trailer.  Basically there just wasn’t enough going on to keep the interest of most adults or their kids (my 2-year-old can attest to that, and he LOVES the first one).

The best part of the entire movie, by far, is the side story of Will the Krill (Brad Pitt) and Bill the Krill (Matt Damon).  Will discovers one day that him and his fellow krill are nothing more than food. Eventually, they will all be eaten and that is their purpose in life.  So he gets the idea that he is meant for so much more, and he and Bill leave their swarm to pursue bigger and better things.  Without the break that these two characters provide from the monotony of the main story-line, the movie would have been a complete disaster.

I will say that the 3D animation in this film has improved tenfold from the original, and the attention to detail is magnificent.  Everything down to each tiny feather is captured on-screen and the movie looks great.

If you are a fan of the first movie, I won’t say that you will completely hate Happy Feet Two.  Kids are sure to enjoy the visuals, and there are some fairly fun songs. But the problem is there just weren’t enough of them. The movie seems to crawl along at a pretty slow pace, and there just isn’t enough going on.  It’s probably safe to wait for this one until you can watch it on DVD or Blu-ray, and leave it on in the background while you can escape and do other things during the slow parts.

Happy Feet Two is a C-