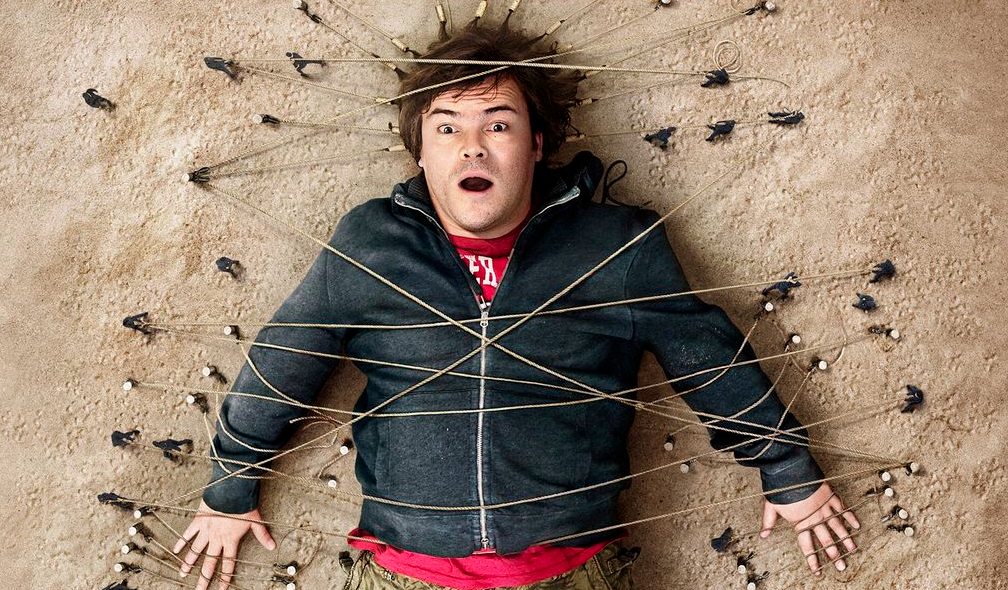 As I sat in the theater watching Gulliver’s Travels I kept thinking about how much this film reminds me of The Lord of the Rings, not in terms of quality or content, but rather of length; I could have sworn I was watching a three hour movie. Much to my disbelief as I left the theater, only an hour and a half had passed…and that included previews.

This 2010 loose adaptation of Jonathon Swift’s Gulliver’s Travels centers around present day Lemuel Gulliver (Jack Black) as a lowly mail room clerk at The New York Tribune where sees a 20 year old assistant promoted to become his boss and longs for the opportunity to express his affection for travel writer Darcy Silverman (Amanda Peet). In attempt to grow closer Gulliver plagiarizes a writing sample and wins his first assignment from Darcy to venture into the Bermuda triangle and score a “fluff” interview with a local. However fate would have it that he never manages to get that interview.

For a film based on classic literature and starring otherwise competent actors, this adaptation of Gulliver’s Travels is simply awful. Aside from the painfully predictable story and fact that the filmmakers did almost nothing to justify the use (or price) of its 3D technology, the script plays to the lowest common denominator of audiences. The term “low-brow” does not suffice when given the fact that this is supposed to be a children’s film. At one point the miniature Lilliputians attempt to tackle the giant Gulliver and in their efforts manage to pull his pants down revealing his buttocks, which just so happens to fall squarely onto one of the tiny soldiers. Another example of the embarrassing and almost offensive attempts at “humor” is evident in a scene where Lilliput’s king finds himself trapped in a burning room of his castle – Gulliver reasons that the only way to put out the fire and save him is to urinate on the room and the king himself.

If there would be any attempt to justify the making of this film, it might be that it was meant for a straight to video release, however it’s been reported that Emily Blunt who plays the Lilliputian princess actually dropped out of Iron Man 2 to make this film, a film where in one scene when she being kidnapped her acting is so pronounced and over the top that it seemed that the kidnapping might be some sort of sarcastic farce, like a dramatic stage whisper. Unfortunately that was the actual way she wanted to play that scene.

For a film as cringe-inducing as Sarah Palin’s interview with Katie Couric, it is hard to find anything redeemable about this piece of celluloid. The 15 year old couple that made out during the entire movie would probably feel the same way. If anything positive can be said about this movie it is perhaps that children might like it; but even then as parents and responsible adults, what kind of message are we sending to our kids if we endorse this kind of “cinema”?