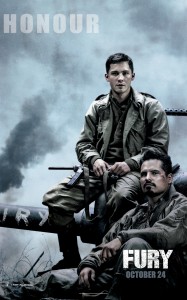 I’ve seen thousands of men lying on the ground, their dead faces looking up at the skies. I tell you, war is Hell!

If there is one singular purpose in Fury, it is to convince you of the notion that war is hell. Most people didn’t need convincing of this fact before seeing the film, but they’ll likely leave the theater echoing the sentiment in their heads.  Fury brutally beats you over the head with the atrocities of war in its quest to show you the hardship faced by many combat troops in World War II.

The film revolves around the lives of a seasoned Sherman tank crew led by Don ‘Wardaddy’ Collier (Brad Pitt). The crew has successfully made it through Africa, D-Day, and are continuing to cause havoc as the Allied forces invade Germany. Despite their stellar record, they lose one of their members shortly before the film begins.  Norman Ellison (Logan Lerman), a fresh trained clerical typist, is thrust into the front lines of war as he replaces the deceased member of ‘Fury’.  Over the next two hours we follow Norman as he struggles through the worst parts of war, as he struggles with the inevitable doom facing him on the front lines.

The strength of Fury lies in its cast from top to bottom. Lerman plays the fresh recruit with surprising sincerity, and his eventual transformation is perfectly believable.  Brad Pitt brings in a strong performance as the battle hardened Wardaddy. Although, at times his performance veers awfully close to Lt. Aldo Raine of Inglourious Basterds. Pitt anchors the film well, and escalates the performances of those around him.  His even keeled character is in stark contrast to that of Shia LeBeouf’s Boyd, Michael Peña’s Gordo, and Jon Bernthal’s Grady. The chemistry between the core cast shines across on screen, and saves moments that might have dulled the film with a less talented cast.

Washed out colors and grays dominate the visual landscape of Fury.  Overcast skies mixed with the ominous score give the film a dark feel, and the sometimes gory visuals only add to that feeling. The biggest knock on Fury is the fact that it continually hits you over the head about how terrible World War II was for the men fighting the battle. Some of the darker moments feel added in for shock value rather than substance. Many of these moments come as moments of plot filler to disguise moments in the film that were becoming overly dull.  Director David Ayer crafts a great visual look and great performances, but he would’ve been aided by being a bit more subtle with his message.

Fury is a fine film, and fans of the genre are likely to love its portrayal of  soldiers fighting in the gasps of a dying war. However, it doesn’t add much that hasn’t been done in war films for the past few generations. It’s likely to get lost in the mix of dozens of similar films across the years.