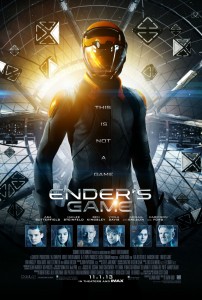 Ender Wiggin (Asa Butterfield) is a prodigy. He has quite possibly the best military mind in the world, and he’s still a child.  In an effort to stem further violence from an alien invasion force known as the Formics, Ender and other children are trained throughout their young lives to become military strategists and soldiers. With their window to take down the Formics slowly closing, Colonel Hyrum Graff (Harrison Ford) is tasked with quickly getting Ender up to speed, and helping him reach his true potential.  Ender is sent to Battle School where he must go up against the best and brightest.  The success of his training may ultimately decide humanity’s fate.

Regarded as one of the best science fiction novels of all-time, Ender’s Game has been sought for film adaptation for years. Unfortunately, the novel is dense with themes that aren’t easily pulled to the screen. When fans of the book heard the film was finally making its way to the silver screen, there was some apprehension most of their parts.  Fans were immediately put off when the studio aged up the characters quite a bit for greater mass appeal.  Fans of the book will be impressed with how true to the book the film is at most times, but will be equally frustrated the condensed nature of the film.  Many favorite moments will be left out, and due to the deletion of some scenes, Ender may not feel like a full fleshed out character to some fans.

One of the primary problem’s with Ender’s Game is that it blatantly tells you character motivation. It’s filled with dialogue peppered with moments meant to clarify, but ultimately make the film seem shallow.  It will launch the cry from many fans who will shout, “The book was better.” In this case they’d be absolutely right.

Ender’s Game is no where near a terrible movie. In fact there are many positive things to be said about the film. The production values are to be commended, and keep the film soundly in science fiction, rather than science fantasy. The cast which includes the likes of Harrison Ford, Viola Davis, and Ben Kingsley is impressive, if slightly underutilized.  The story may not contain the depth of its source material, but those unfamiliar with the book might find a special amount of magic within.

Most films would benefit from having their run time clipped slightly, Ender’s Game is a film that could have done a lot more with 15 or 20 minutes of run time. With the extra time they could’ve fleshed out a bit of the weak supporting cast, and given greater insight into the mind of Ender. The condensed nature of the film ultimately leaves it as another film that is beautiful to look at, but emotionally flat.  It’s a disappointment when something could have been great, but in the end is merely passable.