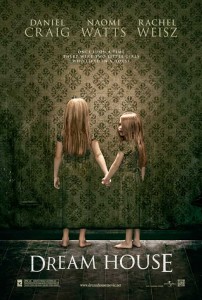 Dream House should be great. It stars an Oscar winner (Rachel Weisz) and Oscar nominee (Naomi Watts) and is directed by 6-time Oscar nominee Jim Sheridan (My Left Foot, In America). So what happened? We will take a look at what works and what doesn’t work with Dream House in two sections. The first will be spoiler free, the second…will not. Dream House opens with Daniel Craig as he retires from a prestigious publishing job to spend more with his family. He soon learns that his idyllic new home has a dark haunting past and fights to save his wife and daughter from the terrifying events to come.The problem with Dream House is that the plot and writing often  seem extremely lazy. The film opens with jarring, unnatural dialogue and oddly abrupt one word responses from Daniel Craig; while in the following scene, Craig suddenly becomes lighthearted and full of energy with his family. The movie does several things right, unfortunately for every step it takes forward, it also takes one back. The general concept and twists in the film are great at their core, but the fabric that stitches these events together seem haphazard at best. If you’re not one to analyze movies to death, you’ll probably walk away fairly satisfied.

Rumors state that director Jim Sheridan had several disagreements with Dream House’s production company Morgan Creek. Typically, producers fight for the film to be more “accessible” while the directors and writers fight to tell a compelling story. There is no doubt that this was the cause of most of the films’ downfalls. Almost every fault in this movie could be described as feeling “unnatural”. However instead of enhancing the scare, these jarring moments only remind the viewer that they’re watching a movie.

Because so many of the film’s flaws deal with specific plot points, they will be discussed below in the spoiler section. If you have already seen the movie…keep reading. 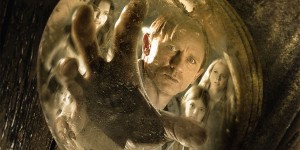 While the opening scenes detailed above come across as unnatural, it seems that one could make the case that they are meant to be that way. The biggest problem with Dream House is that it takes its liberties way too far. To simply explain everything away by saying that “he imagined it all” doesn’t take back the rational thoughts going through the audiences minds at the time.

Take for instance the scenes at the halfway house and the psychiatric hospital. Without knowing that Daniel Craig is Peter Ward, it seems extraordinarily obvious that the staff are breaking all sorts of confidentiality laws. Why would a psychiatrist openly discuss the most intimate details of another patient with a complete stranger? Why would the local police be so counter productive to helping a citizen? There are also a number of questions that can’t be explained with the “imagination” clause. Why would a halfway house openly post everyones name behind the counter? Why would a psychiatrist save the chewed remains of Peter Ward’s ID bracelets? Why the hell would the writer of this film think that “A-ten-ton” would be a good name for the main character?
Let’s take the argument that one has to agree to a certain suspension of disbelief to enjoy any film. Maybe the confidentiality stuff isn’t that big of a deal. Then you still have to deal with the final revelation sequence that happens so fast that it’s almost  impossible to comprehend what exactly happened with the original killings. Many will say that even a mediocre movie can redeem itself with a decent ending. Dream House fails again. Apparently the makers of this film expect the viewer to believe that Daniel Craig barely makes it out of a burning house alive…decides to go back inside to talk with his dead wife’s ghost….chats it up with her for a good 5 minutes…has a fireball explode next to him… and runs back out of the house to barely escape a second explosion. And if that wasn’t enough, perhaps the worst part of the movie is the realization that the character of Peter Ward has turned this horrific chain of events into a “nation-wide bestselling novel”. What is supposed to do from then on? Get over it? The obvious ending for this movie would have been for Peter Ward to save the Naomi Watts character and die in the fire. As it stands, he gets to live the rest of his life alone, profiting off the loss of his family.If you’re still reading and haven’t actually seen the movie, I honestly would recommend Dream House in spite of all it’s flaws. As stated before, for every mistake, it does something right as well. Save your theater money though and wait for the DVD.

What did you think of the movie? Let us know below.
Facebook Comments Box