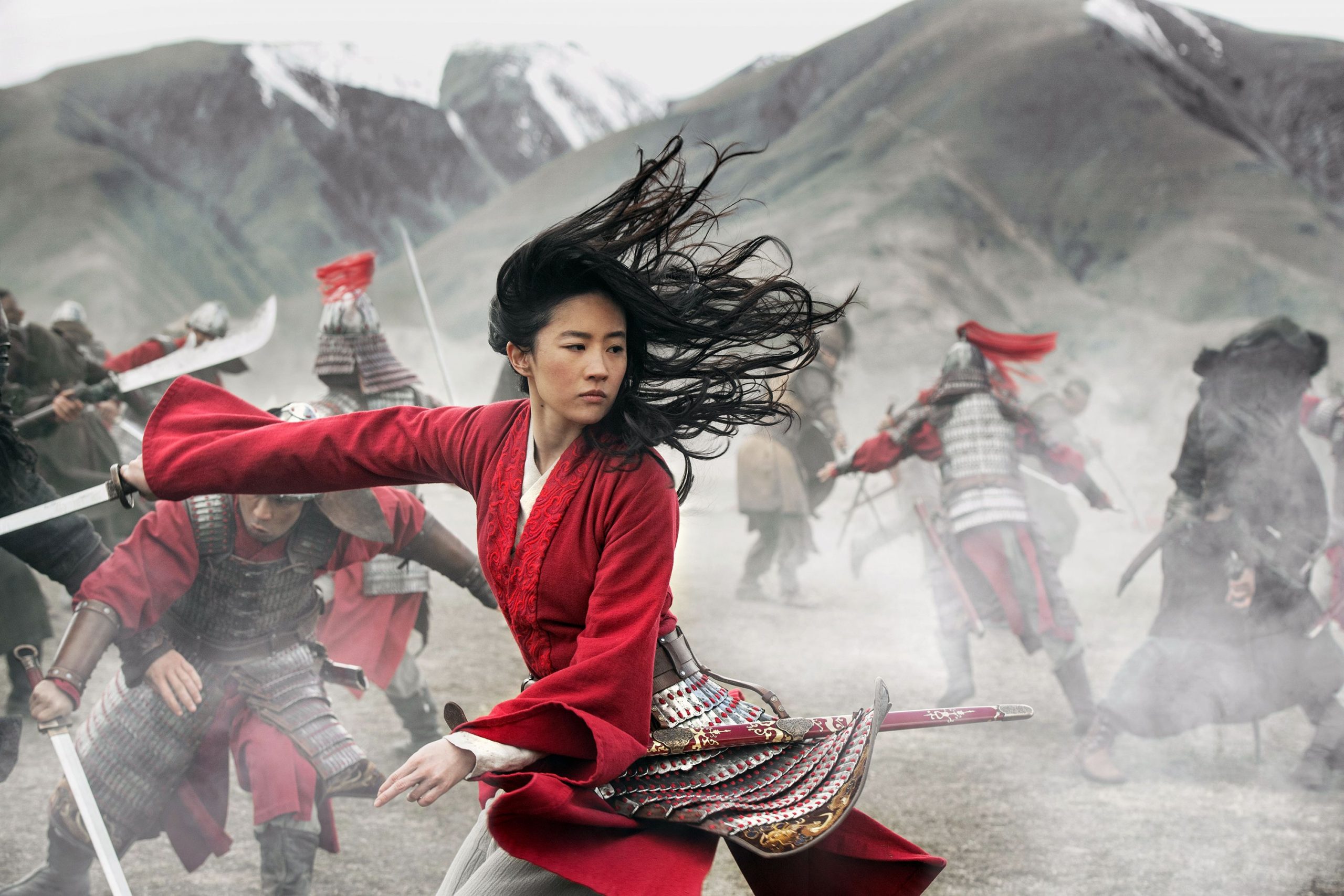 MULAN is the latest live-action remake from Disney, available on Disney Plus today for $29.99 as a part of their new “Premium Access” offerings.

Directed by Niki Caro (WHALE RIDER), the film is adapted from the 1998 animated musical and the Chinese legend of Hua Mulan – the female warrior who takes her father’s place to join the army. Much like their live-action reimagining of CINDERELLA, the musical numbers are dropped in place of a more realistic tone. The new version also focuses more on Chinese culture and traditions.

If you are familiar with the animated version, the story remains much the same. Hua Mulan (Liu Yifei) decides to take her father’s (Tzi Ma) place in the Imperial Army due to his age and physical ailments. She joins several new recruits who have very little training, yet must prepare for battle against the northern forces led by Bori Khan (Jason Scott Lee) – who is bent on avenging his father’s death that the hands of the Emperor (Jet Li). Mulan is forced to navigate her new surroundings disguised as a man, meanwhile gaining the trust and respect of Commander Tung (Donnie Yen) and her fellow soldiers.

The film expands on Mulan’s backstory, giving more insight into her family life as well as her abilities to harness her “chi” – a concept in Chinese culture focusing on the energy of living beings. The film opens with the character as a young girl, and we see right away that she is very special. As opposed to the animated version, Mulan already possesses certain martial arts skills which she has been honing in secret growing up.

We also learn about her sister, Hua Xiu (Xana Tang), who shares some touching moments along with the comedic ones revolving around the matchmaker.

Liu Yifei is fantastic in the lead role, embodying the spirit of the character that fans know and love. It’s not easy bringing iconic roles like this to life, but the actor handles it with great strength and determination. Just as her animated counterpart has been all these years, she will be an inspiration for a new generation – empowering girls all around the world.

Jason Scott Lee goes all-in as the ruthless Khan, returning to Disney in a role far different than his take on Mowgli in their 1994 telling of THE JUNGLE BOOK. His intimidating force can be felt throughout the villainous portrayal, and his scenes opposite Mulan and the witch are great.

Fans of martial arts films will enjoy seeing Donnie Yen and Jet Li, although they are not the primary focus. Still, it’s hard not to be excited every time they are on-screen.

There are a few major changes that are sure to rile fans of the animated version, and most of them come in the form of character replacements. The first is Mushu, the lovable little dragon voiced by Eddie Murphy who aided Mulan on her journey. He served as much of the comic relief in that version, so swapping him for the Phoenix who watches over the warrior in a more serious and spiritual form removes a good part of the laughs. Another is her cricket companion, Cri-Kee, who is replaced with a nice homage in the form of a soldier nicknamed “Cricket.” Lastly, and the most egregious in the eyes of fans, is the removal of Mulan’s love interest Li Shang. The idea of a romantic relationship with a commanding officer doesn’t play well in modern times, so the character is reimagined as two new characters – Commander Tung and her new love interest Chen Honghui (Yoson An).

The art direction and cinematography of MULAN is absolutely stunning. A visual feast for the senses, director of photography Mandy Walker captures the beautiful scenery, costumes, and Chinese culture through a breathtaking lens. There is much to take in among the beloved story, and the colorful visuals are mesmerizing from beginning to end.

There are some brilliantly crafted action sequences sprinkled throughout the film, which happen to be more intense than what audiences are used to from Disney. Keep in mind that the film is rated PG-13, with several fight scenes and battles. While these scenes aren’t hyper-violent, it’s good to know what you are getting into if you are watching with small children. With that being said, Mulan has several moments in the film that make you want to stand up and cheer for the hero. The fight choreography is handled well for the most part, while keeping things within the confines of a Disney feature.

Another new character is a witch named Xian Lang (Gong Li) who uses her shape-shifting abilities to aid Khan by infiltrating the Emperor’s army and most trusted advisors. She’s a well-crafted character who not only is given cool things to do from a magical standpoint – but she also helps Mulan unlock her potential by understanding who she is within. Their time together makes for a welcomed addition.

In order to fit the more realistic live-action tone, the musical numbers are dropped for a new score composed by Harry Gregson-Williams. While the fantastic songs of the original are missing, many are still here in spirit – woven into key moments that evoke a nice sense of nostalgia. The score works very well with the film, and the delicate decision to go a different direction was thankfully handled with care and respect.

MULAN is a faithful adaptation of the beloved story, captured through a mature lens. The film respectfully handles the Chinese culture and stories which inspired it, and makes decisions that ultimately benefit it in the new format. The heart is all there, with solid performances and valuable lessons that put it among Disney’s top-tier live-action remakes.