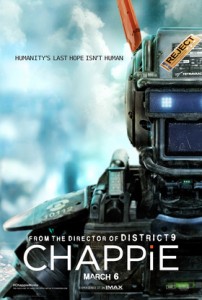 Chappie is the latest film by science fiction director, Neill Blomkamp. Blomkamp has been responsible for some the most modern, contemporary sci-fi films to date. Elysium and District 9 were his last two films, and many critics and movie-goers were not satisfied with his most recent direction. The film community had begun to wonder if the young, brash and over-zealous director was in over his head. Can Blomkamp return to form and wow audiences with CHAPPiE?

Is third time the charm for the director? Read on to find out.

Chappie follows Blomkamp’s crude, realistic and dirty production values of his previous films. To say Blomkamp has a style to his films is like asking if the next Michael Bay movie will have explosions. Blomkamp has the ability to craft worlds that seem so realistic and authentic; they’re science fiction, but his content and they way he presents it is highly believable.

The world Blomkamp and writer Terri Tatchell have created is one of despair and oddly enough, hope. The setting? South Africa, Johannesburg. The situation? Dire. Crime is at an all time high, the local police force over run, a city out of options. Enter Sigourney Weaver (Avatar, Aliens), who plays a brash but easily manipulated robotics CEO, Michelle Bradley. Bradley’s company offers the relief a city with no options needs; a relenting, efficient and uncompromising police force–made of highly advanced, mobile robots. These robots are the brainchild of Deon Wilson (Dev Patel, Slumdog Millionaire). Wilson is responsible for creating the rudimentary A.I. system that powers the Scouts (the nickname given to the robotic police force).

Patel’s character is your generic geeky robotic whiz kid, one that dreams of bigger and better things. That bigger thing? A complete autonomous and free-thinking artificial intelligence. In good ole’ montage fashion, a Red Bull-fueled Wilson creates his life’s goal in a single night. Obviously, we’re given the impression he’s been working on this a good while, but the way it’s accomplished here for the sake of storytelling seems comical. In a movie with a free-thinking and fully conscious robot, Wilson’s night of miracle programming is the most unbelievable element in this film.

With his newfound, world-changing technology in hand, Wilson decides to test it on a terminally damaged Scout. Scout 22, who eventually becomes Chappie – played by Sharlto Copley (District 9, Elysium).

Chappie is a robot; a child of sorts. It needs to learn, but it learns at an accelerated rate. Much faster than any human. Chappie ends up falling into the hands of a criminal couple, played by South African hip-hop group, Die Antwoord (who play a more intense version of themselves, not sure how that was possible).

Ninja and Yolandi (the criminal couple) both have a different approach to how to treat, raise and use Chappie. Both have the desire to use Chappie for illegal purposes for their own gain, but Yolandi ends up falling for Chappie like it’s her own child, while Ninja takes a much more brutal and impatient approach. In my humble opinion, this is where the movie truly shines. The chemistry portrayed by Chappie, Yolandi and Ninja is, in a sense, a magical, character building filmmaking experience.

Chappie is easily manipulated by the couple and those around him. He’s a curious newborn being full of wonder, intelligence and curiosity. His world is one full of sounds, feelings and sights. The film is very juxtapositional in nature; the world is harsh, cruel and mean to Chappie, as one would expect given the setting the movie takes place in. But it’s also full of humor and laughter, maybe a coping mechanism for the audience, and for Chappie.

The film builds tension and a pressing need by giving Wilson an enemy in the form of an outdated army engineer, Vincent Moore (Hugh Jackman, Wolverine). Moore tries to push his outdated, huge militarized police mech (reminiscent of ED-209 in Paul Verhoeven’s, Robocop).

All in all a film has to have a conflict, a beginning and an end. How it gets there is the most important part. While some parts of Chappie felt rushed, incomplete and short-lived for the sake of time and story, other parts shined and outright outdid themselves. The moral implications presented in Blomkamp’s latest film really make you question the cruelty that humans can bestow on something they deem lesser than themselves, something they can do without consequence. Chappie is, in the purest sense, innocent. He uses the world around him and observes his surroundings, takes to heart what people say to him (whether good or bad), and does his best to make decisions that are morally right–despite people telling him otherwise.

Chappie is full of humor, wit, action, sadness and hope. The soundtrack is primarily by the hip-hop duo who stars in most of the film (Die Antwoord), but there are some bits of 8-bit “video game” inspired music. It fits the bill and doesn’t seem out of place–especially if you’re a fan of that type of music (which I am).

I wholeheartedly recommend Chappie. It’s an amazing film with great moral and social questions that, you, the audience, will be faced with. You will be mad, you will laugh and you will hate your own species. You’ll wonder if humans can adorn the responsibility of creating a fully conscious entity. But, by the end Chappie becomes more than anyone could imagine; a being, a living conscious being, that despite his surroundings becomes a role model we could all live by–he forgives, loves and fights for what he believes in.