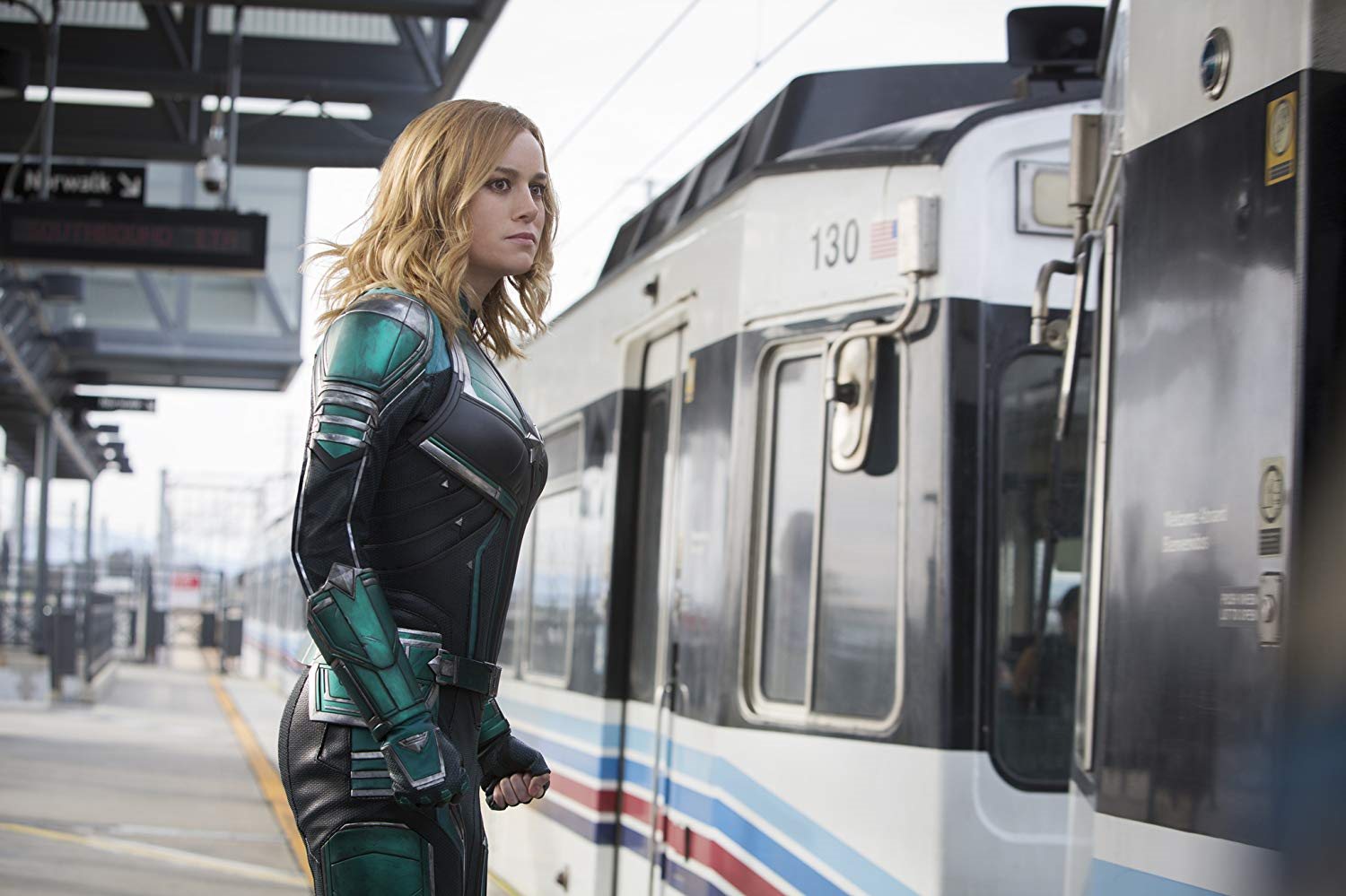 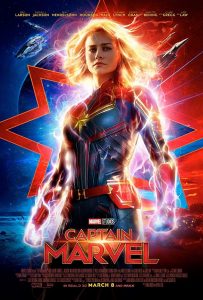 Captain Marvel stars Brie Larson as Carol Danvers and follows her character through a cosmic journey of self-discovery as she’s trapped in the middle of a galactic war between two alien races. The film acts as a prequel to most of the events in the MCU as her journey finds her on Earth in 1995 alongside a young Nick Fury (Samuel L. Jackson). The film takes no shame in making as many 90s references as it can in the film’s just-over two-hour runtime, as well.

Captain Marvel has a lot riding on it. While DC broke the barrier for female-led (and directed) superhero films in 2017 with the release of Wonder Woman, this is Marvel’s attempt to make its own statement with its own. The only difference here is that DC did it with an entirely recognizable female character while Marvel is doing it with a relatively unknown character to those outside of the comics world, so I’m not quite sure how comparable the box office numbers will look, but we’ll certainly find out soon.

Does Captain Marvel hit its mark? In some ways, yes. However, it feels like a misfire in a lot more. 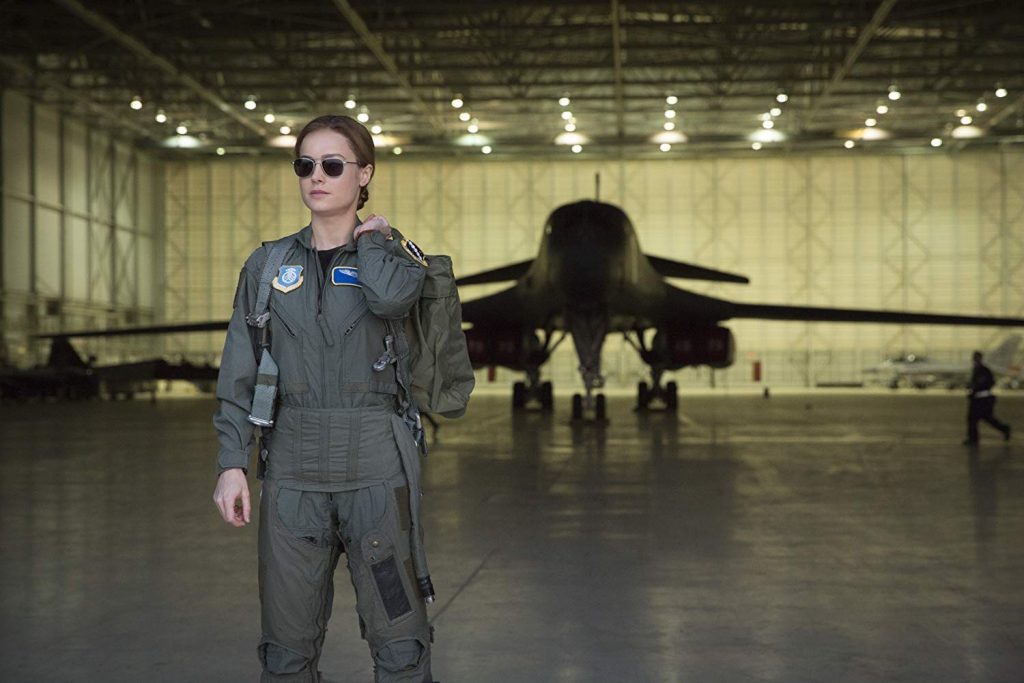 We’re on the backside of phase three in this twenty-one film cinematic universe (twenty-one!), and Captain Marvel feels very formulaic and like it belongs somewhere in phase one where Marvel is trying to find it footing. From a clunky opening to a dragging second act, the film is somewhat of a chore to watch at times. There are a few action scenes sprinkled in, but for the most part, I found myself kind of bored throughout most of it.

The de-aging CGI used on Jackson and Clark Gregg (Agent Coulson – who’s inclusion in the movie is nothing more than for familiarity sake) is as incredible as ever. If the viewer didn’t know better, they’d think they’re watching 90’s era Samuel L. Jackson, who’s actually 70 years old in 2019. In addition to his appearance, Jackson’s presence in this movie helps elevate the film to an enjoyable level when on screen, as he and an otherwise wooden Larson work very well when sharing the screen. 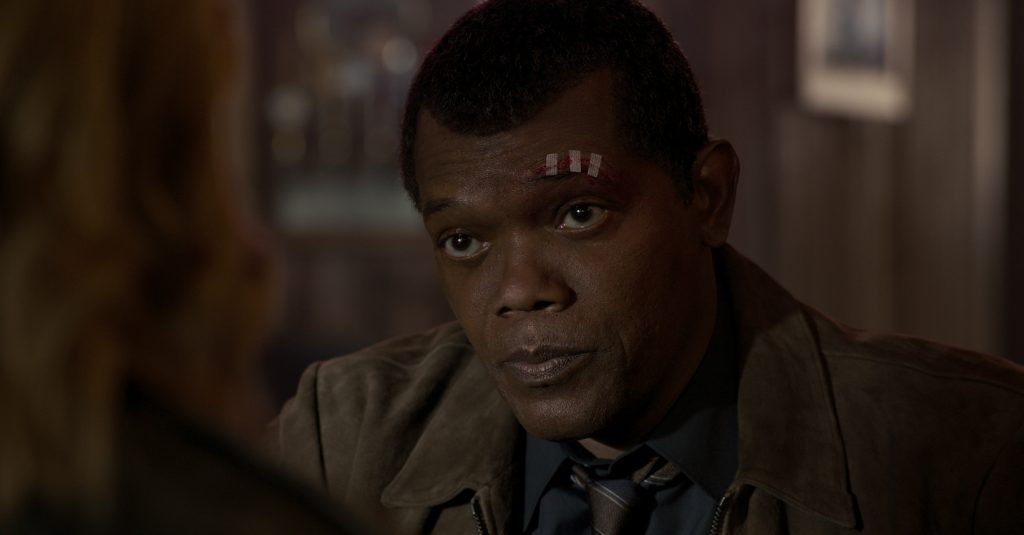 I didn’t dislike Larson in the role, but I felt her performance may have been hindered by poor direction and/or a less than stellar script. It seems like much of the movie is wasted as her character spends the entirety of the movie trying to figure out who she was in her past life, only to find out by being told by her best friend, Maria (Lashana Lynch, who probably shows the most emotion in this movie) and Maria’s daughter. She doesn’t find herself. She’s told who to be based on who she was, and I found that to be an incredible misfire on her character development.

Joining Larson and Jackson in the cast is a slew of new and familiar faces. Jude Law makes his MCU debut as Yon-Rogg, a Kree soldier and partner to Danvers (or Veers, as he calls her). Checking in for yet another antagonist role is Ben Mendelsohn (see: Ready Player One and Star Wars: Rogue One) as Talos, the Skrull leader and enemy to the Kree. Also in addition to the cast is a new companion, Goose the Cat, who’s taken quite a liking to by Nick Fury and creates some pretty funny interactions, considering we’re used to seeing Jackson play Fury as a no-nonsense SHIELD director. Djimon Hounsou and Lee Pace also reprise their roles as a younger Korath and Ronan, whom you may remember as Kree characters from Guardians of the Galaxy Vol. 1. 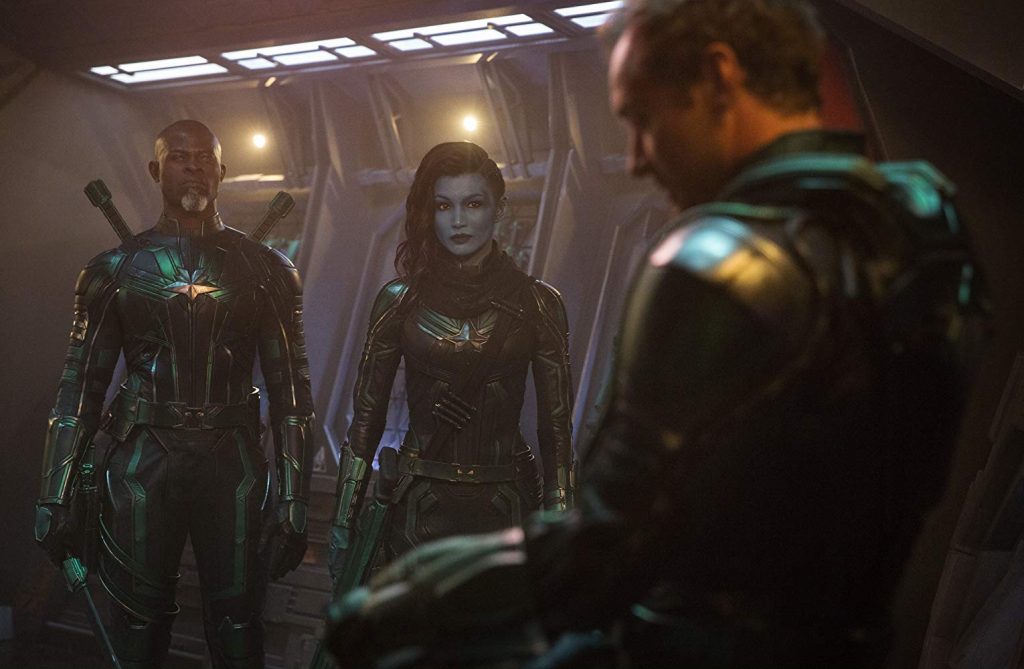 Speaking of Guardians, remember that wonderful hand-selected soundtrack by James Gunn that added a whole other layer of brilliance and enjoyment to his film? I found the complete opposite to have happened here with Captain Marvel. While there are 90’s references galore from pop culture to Blockbuster Video, the soundtrack could have and should have elevated this film all the same. Sure, it’s nice hearing some popular tracks from Nirvana, TLC, and Garbage, but the song selected to play over the climactic final battle (which I won’t spoil) simply just did not fit the scene. I get why this song was chosen lyrically, but it was just too on-the-nose and not a great pairing for the scene.

In the end, Captain Marvel isn’t a bad film, but I did find it significantly underwhelming, at least at this stage of the Marvel Cinematic Universe. I do think, however, there’s room for improvement with her character in the films to come and I still have faith in the Disney/Marvel to take a step back and hopefully make that happen. As for this one…

P.S. Per usual, there are both a mid-credit AND an end-credit scene.

P.S.S. The brand new Marvel Studios credit roll is beautiful and should light up people’s faces.