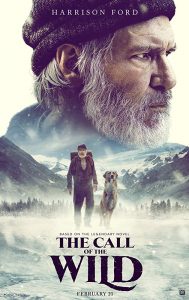 I’m not sure what it is, but there’s something inherently romantic with the Yukon wilderness. It’s hard to nail down exactly what it is: perhaps it’s the idea of exploring the pristine, undisturbed world of the Yukon. Or perhaps the romanticized notion of striking it incredibly rich on your own. When I was growing up, I watched the VHS of White Fang repeatedly, to the point that I’d memorized it. Most of the guys in my class also read the novel Hatchet, which took place in a different part of Canada, but the idea of surviving on your own using only what you could find was just a thrilling endeavor. And, of course, Calvin and Hobbes had their legendary adventures in Yukon, Ho!

You can’t really discuss this genre, though, without mentioning Jack London and his legendary bibliography. Along with the aforementioned White Fang, his pièce de résistance, The Call of the Wild, was immensely popular when it was released and prompted several film adaptations. Readers followed his

It’s been over twenty years since the last adaptation, and now director Chris Sanders is giving it a shot. In his directorial debut, Sanders took an interesting route; rather than hiring trained dogs to perform stunts, he elected to use CGI for Buck and the other dogs.

Did it pay off? Well, it probably made things easier for the production crew. Allowing a human fill-in to act out Buck’s parts undoubtedly made things simpler, as opposed to having to do multiple takes that a trained dog might take. On the other hand, while MPC (the effects company) certainly tried their best, it’s impossible to deny that Buck (and really all the dogs and wolves) suffer from the uncanny valley effect, where they certainly look near-realistic, there’s still something that’s just off about them.

If you can look past that and focus on the actual film itself, it’s surprisingly solid. Harrison Ford plays  John Thornton, a grizzled man whose marriage fell apart following the death of his son. Signing over his old house and property to his ex-wife at the beginning of the film, he seeks some sort of peace in the Yukon as he lives out his remaining years. As he randomly runs into Buck, a massive St. Bernard/Scotch collie mix who was abducted from his home to become a sled dog, they inevitably form a bond as they travel the wilderness. Initially a domesticated pet, Buck’s natural instincts begin taking over as he hears…well, you know.

It wasn’t easy to shoehorn the novel into an hour 40-minute movie, but they did well enough to capture the spirit of the novel (although they do take more than a few liberties with the overall story, perhaps to tone it down for the intended audience of children). Ford does fine with the part he’s given, as even though he’s the human lead, he’s comfortably second-fiddle to Buck. I admittedly went in with pretty low expectations after seeing the initial trailer, but I found myself enjoying it to an extent. Kids will likely enjoy it, as will most adults who read the novel when they were younger.

Ultimately, if you can look past the CGI (RIP, by the way, to MPC, who folded in December 2019), you’ll find an entertaining romp in the Yukon reminiscent of previous adaptations of Jack London’s work. It won’t be in the running for best picture at the end of the year, but it should make for a fun time.

The Call of the Wild gets a B-