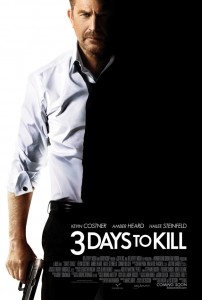 Throughout a given year there will be an ample amount of action movies. The categories in which they fall could consist of growing chest hair after watching it (probably a sign you liked it a lot), making a serious effort to rent it after somehow missing it at the theater, it holds your attention (at least for a little while) when it airs on television despite commercials, and then there is the dubious honor of an action movie that with one viewing makes you seriously question the decision making capabilities of all parties involved. This begs the question of what category of action movie does 3 Days to Kill fall under? Well….

In this tale of espionage, we’re looking through the eyes of Ethan Renner (Kevin Costner), a grizzled CIA operative who has a penchant for…..wait for it…. killing. Nobody would have ever guessed that with the title. Anyway, Ethan is sent on a mission to take out the dastardly villains known as The Wolf (Richard Sammel) and The Albino (Tomas Lemarquis). Yes, you read that correctly, a villain named The Albino. Someone, somewhere is offended. The mission is looked on by afar from CIA agent ViVi Delay (Amber Heard) as to evaluate what Ethan is capable of. As it goes, wiping The Wolf and The Albino off of the face of the Earth is not checked off of Ethan’s to-do list as he suffers from a malignant brain tumor. Deciding to return to his home in France to visit his estranged wife, Christine (Connie Nielsen), and daughter, Zoey (Hailee Steinfeld), he clearly does not receive the warm and loving homecoming most would hope to receive. With his days numbered, he had the intention of leaving the clandestine service for good and live it out with his family. As fate would have it, ViVi shows up offering up the task of finishing the task he started with The Wolf and The Albino, in exchange for an experimental drug that could at least stall the effects of the brain tumor.

Upon seeing that Luc Besson was one of the writers for 3 Days to Kill, and that Kevin Costner’s Ethan is a father, the movie was teetering on the edge of Taken calling and wanting it’s movie back. Thankfully, the daughter, Zoey, does not get kidnapped. I felt disclosing that would help less eye rolling from ensuing. However, one of the problems I had with this movie is the tone. There are parts of Father-daughter moments that elicit hit-or-miss bits of humor, with some parts action and killing. I understand the inclusion of the father-daughter moments for that little thing called character development. At times, it almost seemed like the comedy had began to supercede the action aspects of the movie. Some movies carry out this balancing act with gusto, but here it seems jarring. As for the action scenes themselves? One could argue that they were cleanly shot. Where they particularly memorable? Not especially, no. The villains might as well have been the mustache twirling, Saturday morning cartoon cackling types with the moral drive of being evil just to be evil. Though, in that last statement I felt I was unfair to Saturday morning cartoon villains in that some of them did have a full-fledged plan of some sort.

In short, 3 Days to Kill does not tread any new ground in the realm of action films. At this point, one could argue for the most part that it is an inevitability. What one could ask for is how well it is executed with  Taken being a prime example. Don’t get me wrong, I’m a fan of Kevin Costner, and I could easily list the quality films he has starred in. But, a single actor can only do so much to uplift a subpar movie. To answer my aforementioned question in regard to categories of action movies, this one would be relegated to watching it on tv. Nothing to rush out and see, however, I’ve seen much, much, worse. The movie Getaway wouldn’t even be invited as the only guest to the birthday party of 3 Days to Kill.