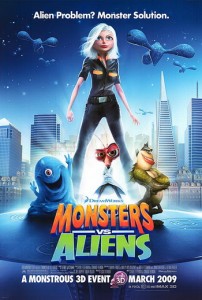 After two reviews, this film has received an average score of 5/10

I was finally able to see “Monsters vs. Aliens” in all of its 3D glory – and I have to say that I was very impressed. Going into the film, the main thing that I took into consideration is that it was going to either be a fun time, full of amazing 3D effects the likes which have never been seen – or it was going to be a boring kids movie full of distracting 3D effects. The movie was anything but the latter.

“Monsters vs. Aliens” starts out with a flight through the solar system in brilliant 3D, immuring the viewer into the film right away. The effects were not distracting at all; rather they gave a feel that we were really along for the ride. We then switch to a monitoring station, where one of the security guards is relaxing, while playing with one of those paddles with the bouncy ball attached via string. Yes – I know what you are thinking – did it bounce out at the audience in 3D? The answer is “yes.” But it was really cool, and it allowed me to realize what film makers can actually do with 3D. That was the last time that I can really remember one of those effects; the rest of the 3D effects were there more to represent the “depth” of the characters and scenery.

We are introduced to our main character, Susan (voiced by Reeese Witherspoon) on her wedding day – set to marry her obnoxious weatherman fiance Derek (Paul Rudd). Everything is looking good – that is until a giant meteor falls from the sky and crushes Susan just moments before she is to walk down the isle. Fortunately, she was able to get up with only minor scratches and a little dirt on her dress. But as the bride proceeds down the isle, something a bit unusual happens; Susan grows to giant “Godzilla-esque” proportions, and chases everyone away. As she picks up Derek, it looks like something out of King Kong, as Susan is tranquillized by the military.

Susan wakes up in a secret military base, where we meet the rest of the main characters of the film – a collection of some of the biggest names in Hollywood right now. Her roommates include B.O.B. (voiced by the hilarious Seth Rogen), Dr. Cockroach (Hugh Laurie), The Missing Link (Will Arnett), and Insectosaurus (I giant insect that is about 50 times larger than the gigantic Susan). All of these “monsters” have been captured by General W.R. Monger (Kiefer Sutherland), a character reminiscent of Sgt. Hartman from “Full Metal Jacket,” but less insulting and obnoxious.

W.R. Monger’s plans to keep these monsters locked up for life, but those plans suddenly change when a monstrous alien robot comes to earth to collect the power from the meteorite that hit Susan. The robot was sent to earth by the recently awakened “Gallaxhar” voiced by Rainn Wilson (who plays Dwight on “The Office”). The character is egotistical and eccentric, and is very entertaining. This is where we are introduced to the concept of “Monsters vs. Aliens” and the movie takes off from there.

The movie was very entertaining, and kept me interested throughout the entire 90 plus minutes. This is something that not all animated features can do. I feel that the 3D really helped make the story more interesting, and provided the support to keep the audience’s attention even during down times. I was very impressed with the animation, and think that the creators did a great job implementing the three-dimensional depth and movement. I feel that to get the most out of your movie tickets, you NEED to see the 3D version. It really makes it a great experience for the entire family. All of the kids around the theater were having a great time, and seemed to generally enjoy the film.

The latest from DreamWorks Animation is one of their lesser efforts that don’t work on almost every level outside of the pretty solid 3-D.

Susan Murphy is about to get married to her ‘weather man with a plan’ that has them moving up to the big time in no time. After getting some unexpected news that she is moving to Tucson instead of Europe for her Honeymoon, Susan is hit by a giant meteor that crashed to earth after hurling through space from a far away exploding planet. Susan some how walks away from this and heads to the alter; only to grow into a giant woman that busts out the ceiling and walls of her church ceremony. The government quickly responds and takes her away into confinement in a top secret facility for monsters where she meets B.O.B. the blue blob, Dr. Cockroach (a mad human scientist that turned himself into a cockroach), The Missing Link (a creature from the black lagoon like beast), and Insectosaurus a 300 foot tall furry insect looking monster. In the mean time, an evil alien warlord, Gallaxhar, sends a giant robot probe to earth to search for a precious substance that composed the meteor that crushed Susan and made her grow to what she is. Upon it’s landing, the president addresses the robot on site before it begins attacking the countless military personnel on site, with the President barely escaping to his war room before the robot probe heads off towards San Francisco. This spurs the monster wrangler of the government General Monger to call upon the president to have his gang of monsters he has locked up to be released to attempt to defeat the robot droid.

Now, I just pretty much summed up the first couple scenes of the film, only, that paragraph takes about a half hour to unfold in the film, which means, it is dragging big time. The intro to the monster containment center is bloated and takes forever, as does the opening wedding, and the encounter with the robot probe shares this same feature, bloat. The film is just chockfull of misfires, bad jokes, and horrible references. The film is also populated with a number of loud, obnoxious, and stupid characters that you wish you could just reach into the 3-D world in front of you and kill. Luckily the main five monsters don’t fall into that category, well Susan kind of does, but above these complaints about side characters the film makes zero sense whatsoever, in that the plot is pointless drivel moving us from one set piece to the next.

I mean, for defeating the robot, the government just agrees to let these guys go and attempt to live in public? Really, a 300 foot tall insect thing is just going to blend in and be just fine, as is an indestructible blue blob and a cockroach man? Give me a fucking break. Not to mention Susan is still a giant and all of a sudden isn’t motivated to be small again after one spat with her self absorbed fiancé.  Insectosaurus is also a completely pointless character that is only there for sight gags and a plot device, the guy might be kind of cute and funny, but when his only defense is shooting snot all over the place, well, shit. Add in a fake death and more failed attempts at humor and you’ve got a lot of head shaking and boredom in the theater.

I will say that there is some decent action added into the mix but this doesn’t save a pretty awful movie from start to finish. There was an occasional gag or two that worked, or a funny line here or there, but when you are hitting about 20% maybe on the comedy scale it is hard to take, especially when the misses are so excruciatingly bad.

The voice acting was alright, with the only person really playing a character that wasn’t just the actor being the actor being Hugh Laurie as Dr. Cockroach. Seth Rogen provides some laughs as B.O.B. and Will Arnett has the best material to work with as The Missing Link but outside those three, the cast just didn’t work. Colbert is given horrible material as the president, as is Rain Wilson as Gallaxhar. Kiefer Sutherland’s General Monger is so loud and over the top I wanted to blow out my ear drums every time he talked and Paul Rudd didn’t really bring anything to Susan’s douche fiancé.

In the end, Monsters vs. Aliens is a pretty giant misfire. Sure the 3-D was cool at times, but it didn’t touch how well it was used in Coraline early this year, and there is a pretty good chance I might see seven movies with better 3-D, off the top of my head, this year alone. Jokes fall way flat, none of the characters are interesting or built to feel compassion for, and the plot is pointless and makes no sense whatsoever. If the kids want to see this, try to find someone else to take them, and don’t waste the extra bucks to see it in IMAX unless that is the only way to see it in 3-D. A Real 3-D theater will do fine and you should spend as little as you can on this miserable attempt at humor if you have to spend any at all. I just don’t get how DreamWorks went from Kung Fu Panda to this and still hasn’t looked at Pixar to realize that shit like this is just incomparable and a waste of time.