I know looking at the title you are probably saying, “Duh!”.  Both men are attention grabbing spotlight seekers who constantly try to one up everyone around them with their constant douchebaggery. Well, it now seems that Michael Lohan is trying to bring down the competition. 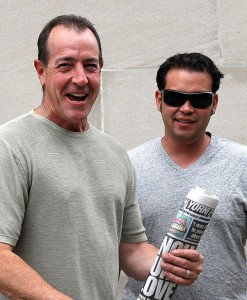 We’ll give him this, Lohan certainly managed to get Gosselin talking during the nearly four-minute call, spouting off on his exclusivity contract with TLC, dishing on his relationships with Hailey Glassman and Kate Major, pronouncing he will not—repeat not—be “scare tactic’d,” and…one more thing…what was it?

“I mean, I put my kids out there to every pedophile on the planet and they never got paid for it?” he said in the tape obtained by Radar Online. “It’s disgusting.”

Gosselin made the astoundingly misplaced declaration while floating his (untrue) pet theory that the cable channel was somehow compensated for stories about the show that appeared in People and Good Housekeeping.

Apparently, Gosselin was upset that TLC was (but really wasn’t) profiting off his family and wanted a piece of that action for himself.

“It’s like a shopping game now,” he told Lohan, who, as always, edited his half of the conversation off the tape. “Because everyone knows I talked. So like, ‘Oh my God, he’s free game now cause TLC doesn’t give a f–k.’

The answer he was looking for was not the obvious—i.e., an exclusivity clause in his TLC contract, which came back to bite him in the you-know-where not long after this conversation. Nope, according to Jon, it was much more conspiratorial than that.

“And I see now they know that I know. That they took money from People, they took money from Good Housekeeping. They struck side deals and none of that money went to my kids. To leak that to the public? Oh my god, Michael, can you imagine? They’d be so f–ked! Their stock would tank! That they stole from eight kids!”

While Gosselin’s grand plans of whistle-blowing clearly got sidetracked somewhere along the way, his penchant for rambling incoherently about defending past relationships is alive and well.

“And the Kate Major thing—you know, I tried to do the In Touch things as much as possible and say…you know we’re friends, it didn’t work out, blah, blah, blah…and then she says, ‘I look so bad.’ You don’t look bad. You look like…you know we hung out? Still don’t get it? F–k.”

The recording also makes it clear that Lohan and Gosselin were indeed pitching their own reality project—something both have denied in recent weeks.

“No, I read your email, we all make mistakes, we all do stupid shit, and we learn from each other and that’s the whole point about Divorced Dads Club,” he told Lohan.

And there was even audio proof that Jon Gosselin is not exactly the best judge of character.

“And you know I always give everyone a second chance, I mean, honestly, I don’t really…I’ve known you a couple weeks, and I like you…you know, but I don’t even know your past, Michael,” he tells Lohan.

That’s right, totally irrelevant. After all, why would it be helpful to inform yourself about someone’s past? It’s not like people repeat bad behavior or anything.

“His past, I’m like, ‘I don’t know about his past. I only know what you assholes write about him. It’s the same s–t you write about me, so why should I believe you?'” Gosselin continued on.

How stupid and messed up are these families? Is fame really that important? The only thing these people are famous for, is trying to be famous! What a sad existence. Michael Lohan is such a train wreck he doesn’t even realize he’s made himself an even bigger joke by releasing all these tapes.  Oh well, like all wannabe celebs their 15 minutes is almost up.