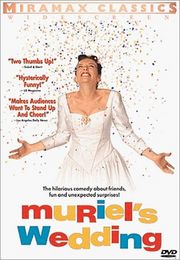 I come to you this week to discuss a very special movie: Muriel’s Wedding. You’ve probably seen it sitting on the shelf at your local Blockbuster (they still have those, right) a thousand times and moved right past it. I can’t blame you, it has a weird cover – odd, brightly colored block lettering and a woman in a wedding dress shrugging towards the sky as if to say “Why is no one renting me!?” As a guy, I can say that unless my wife hadn’t forced me to watch this many years ago, I would have NEVER seen this movie. I didn’t like the way it looked…foreign. (You can tell from the cover that it’s probably British or something…at least it doesn’t have subtitles) But it’s not British at all (it’s Australian) and it is super damn funny.

Muriel wants nothing more than to fulfil her dream of getting married…she doesn’t necessarily care to whom, she just wants to have an amazing wedding. (Something we can all relate to…am I right guys?) And in the process, she finds she is able to mature from the insecure and confused girl she was to the confident adult that may finally get that perfect wedding day. I know that sounds like some awful Lifetime movie (is there any other kind?), but it’s not – there is enough story and sex jokes in here to keep anybody entertained.

While the story is interesting and engaging on it’s own, the reason Muriel’s Wedding deserves to be mentioned here is because of it’s ability to hold up over time. Comedies, like horror films are often best during their initial viewing. Everything is fresh, all the jokes are new and after you hear the punchline, it just goes downhill from there. Not the case with Muriel’s Wedding. I will admit, the first time I saw this I thought it was a “good” movie. Not great. The second time I watched it, I thought it was hilarious. The third time I watched it, I loved it. Everything gets better. The characters get better, the jokes get better and the story gets better. This is so much more than just another random chick-flick.

So the next time you’re walking through the aisles of your local video store and you come across that goofy cover…pick it up. At Blockbuster, it’s like a dollar…and it’s on Netflix Instant. It’s probably even at the library – you could watch it for free. And if you’re one of those people who love to quote movies…this is an incredibly quoteable movie.

Best Line of The Movie: “At least let her finish her orgasm.”

Let me know what you think of this format in the comments section below. We can always do more.