Marvel’s ANT-MAN Opens Number 1, Yet Lowest Gross Since THE INCREDIBLE HULK. What Does That Mean? 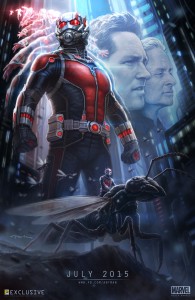 By now, we’ve all grown used to the idea that any new Marvel movie is capable of topping the box office and leading ticket sales worldwide, if not setting a new record for an opening weekend. Time and time again, the studio pushes out a new superhero adventure only to set its own bar higher, and in the process that same studio has raked in untold hundreds of millions of dollars in revenue. It’s the new standard: Marvel Studios + new movie = $$$.

And then along came Ant-Man. Arguably the studio and comic book giant’s most bizarre standalone project to date, the project served as the origin story to a hero who’s actually an original Avenger (if we’re going by comic lore), but who’s also something of a joke. Scott Lang (played by Paul Rudd) is a master thief who’s gifted with a special suit by mad scientist Hank Pym (Michael Douglas). The suit gives him the ability to shrink down to ant size while enjoying the accompanying perks, like magnified strength and the ability to control, um, ants. And voila! A superhero story is born.

Incredibly enough, this ludicrous concept actually played pretty well on the big screen. Ant-Man received pretty good reviews (a cumulative 80% positive on Rotten Tomatoes), for a number of reasons. To begin with, Paul Rudd is an intriguing brand of Hollywood darling; he can be knee-slapping hilarious or he can play the forgettable good guy, but he’s really hard to criticize. Douglas is his own brand of darling, and on top of these two packing a punch among critics, there’s the fact that the movie is pretty enjoyable. Like Guardians Of The Galaxy before it, it excels by not taking itself too seriously, and this helps viewers to relax and enjoy the fun.

Unfortunately for the studio, Ant-Man didn’t quite match the box office success of Guardians Of The Galaxy (which topped $160 million in its opening weekend). Marvel’s latest had a gigantic opening by most ordinary standards, nearing the $60 million mark. But as IGN pointed out, this was actually Marvel’s weakest opening since The Incredible Hulk (and that in itself is an extraordinary statement on the money-making power of the superhero genre).

So… A new Avenger, a lovable cast, and a favorable critical response. Why did Ant-Man have such a weak opening by Marvel standards? Well, there may be a few reasons.

The most obvious reason is that Ant-Man simply suffered from inferior name recognition to that of other heroes. This theory was presented clearly by Oliver Gettell of the LA Times, who wrote, “Ant-Man was marketed as a more comedic, smaller-scale take on the superhero genre, and its diminished scope is reflected in its box office tally.” Basically, the idea is that as much as film fans might enjoy the likes of Rudd and Douglas, and as many loyal Marvel fans as there are, Ant-Man had this issue: it didn’t have the same ability of its Marvel predecessors to reach a wider audience including more casual moviegoers or those who are in it for jaw-dropping, Earth-saving action sequences.

But speaking of marketing, it’s also worth noting that Ant-Man almost seemed to slip by in some areas where previous Marvel films have made a splash. Consider the video game market, for example. Most every major superhero release these days has at least some accompanying gaming material, be it a console game, a LEGO gaming adaptation, or an independent mobile game.

In many cases, it’s actually the online casino industry that provides additional film marketing in the form of gaming titles related to heroes and film releases. This is particularly apparent on Inter casino, the oldest such site operating on the web, that hosts a number of titles related to popular DC characters (such as Batman and Superman), and gamers can find these and other options (such as those related to Marvel films) in several places online. And yet, Ant-Man wasn’t accompanied by any of these sorts of games. The closest it came to a video game marketing campaign was Ant-Man’s introduction into the Marvel: Contest Of Champions app game.

All things considered, it almost seems as if Marvel intentionally lowered the stakes for Ant-Man. It would be ludicrous to suggest the studio didn’t want to have a box-office opening closer to what it’s used to. On the other hand, hyping the film as a smaller side project with more niche appeal might have ultimately been a good way to avoid disappointing the aforementioned fans who are in it for big action with familiar characters.

Whatever the case, the end result is oddly fitting. Just as Ant-Man himself is an immensely powerful character of absurdly small stature, Ant-Man managed a mammoth opening (relatively speaking) that nevertheless looks like a shrunken version of typical box-office numbers from Marvel.