Mark McGwire Admits To Steroid Use 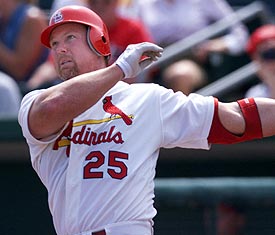 It is a sad day for MLB and Cardinals fans. In the late 1990s the eyes of the country were focused on the Home Run race between Mark McGwire and Sammy Sosa, both on their way to beat Roger Maris’ record of 61 homers in a single season in 1961. That record held up til 1998 when Mark McGwire smashed it with 70 home runs. The country loved it, and St. Louis had a new hero for their baseball team.

His decision to finally come out and come clean was apparently because of taking the job as hitting coach for the St. Louis Cardinals. He is now added to the list of people with asterisks next to their names in the record annals, including Barry Bond, Sammy Sosa, Alex Rodriguez, and Roger Clemens.

So baseball fans what do you think about this story? Could he have hit those home runs without the help of steroids? Did a talented hitter ruin his name for a few extra hits a year? Could McGwire salvaged his reputation a bit more if he had come clean during the Congressional hearings in 2005? Let us know in the comments!