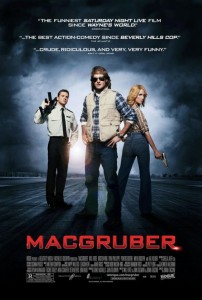 I wasn’t too sure what to expect from MacGruber, to be honest. The skits on SNL were funny, but I couldn’t imagine how they’d turn that into a feature-length film. Additionally, I was already reeling from the news that Megan Fox, the Audrey Hepburn of our day, will no longer be in Transformers 3.

Mock if you will. But name one actress who’s done a more convicing job of running away from giant robots in slow-motion. I dare you.

Equally skeptical about the film was my lovely friend Elizabeth. I had to promise to let her cook me dinner before we went (yes, you read that right). I was actually somewhat surprised she agreed to go, as pretty much all she ever usually says to me is “No” and “Stop touching me”. I’m happy to say that in the end, we were both pleasantly surprised.

The film revolves around the “Saturday Night Live” character MacGruber, an obvious spoof of MacGyver. The beginning of the film shows the hijacking of a nuclear weapon by Batman, er, Dieter von Cunth (Val Kilmer). From there, MacGruber (Will Forte) is introduced in a nod to Rambo as he’s recruited by his former commanding officer, Col. Faith (Powers Booth). Turns out von Cunth was responsible for the death of MacGruber’s wife years earlier, and MacGruber seeks vengeance.

After initial reluctance, MacGruber agrees to help and assembles a team of badasses, who are accidentally blown up in a freak C4 accident, nevermind the fact that C4 is an incredibly stable compound and won’t detonate even if it’s shot with a bullet (unless combined with extreme heat). I know the filmmakers were going for technical accuracy with this film, so to see this was a little disappointing.

His team gone, MacGruber quickly assembles an ad hoc team consisting of Lt. Piper, a recent Academy graduate with no actual field experience (Ryan Phillippe, best known as the guy who banged Reese Witherspoon) and Vicki St. Elmo (Kristen Wiig). a former colleague of MacGruber’s who is secretly in love with him. The rest of the film pretty much consists of their efforts to stop von Cunth.

I was actually pretty surprised at how much/hard I laughed at a few of the scenes. There are some genuinely funny parts in the movie, most of which I can’t really write on here for decency’s sake. The film earns its R rating, but it’s never completely over the top. The dialogue is full of sarcasm and doesn’ t seem unnatural. The movie’s geared more towards men than women, but I found even Elizabeth was laughing at a good portion of the movie.

As for plot, emotion, etc…get that weak sauce out of here. If you want any of that nonsense, go rent The Notebook, sissy boy. There isn’t anything clever or witty about the writing or plot. The film’s just so dumb, it’s funny.

And for the guys, yes, there are boobs in it, but they’re nowhere near desirable. If you enjoy the topless scene in the movie, you either have odd desires or are approaching the age that your food has to be put into a blender for you.

All in all, if you go into the film expecting fast food instead of high-end steak, you’ll most likely enjoy the movie. Basically, MacGruber is like going on a date with me: it’s not much to look at and you might feel dirty afterwards, but it’s relatively quick and if you keep your expectations low, you won’t be disappointed. Just don’t expect to enjoy the nudity that ensues.