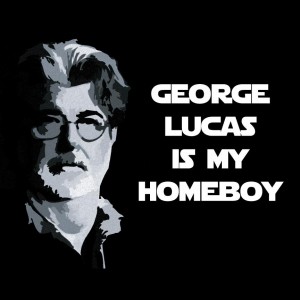 George Lucas is My Homeboy Shirt

Lucasfilm is teaming up with director Kevin Munroe for a CGI musical based around fairies. Kevin Munroe best known for his directorial debut with the animated TNMT film in 2007 is working on a script from Elf and Spiderwick Chronicles writer David Berenbaum. There is little details known, and a Lucasfilm rep has come out saying that it is too early for details.

Lucasfilm’s next project will be Red Tails. George Lucas has been working on the story about the famous WWII pilots, The Tuskegee Airmen, for quite some time. The film should be released later this year starring Terrence Howard, Cuba Gooding Jr., and Bryan Cranston as stars. Lucas penned the project, but handed the directors chair over to TV pro, Anthony Hemmingway, who will be making his first feature.

It is nice to see Lucasfilm continue to have life after Star Wars. I’m sure they’ll have their hands full with the TV spinoffs over the next few years, but maybe Lucasfilm can be turned into a viable film company once again. I’m very excited for Red Tails, and I’m excited that George Lucas relented the directors chair over to someone else. George catches a lot of flack, but the man does know how to craft an interesting story. Unfortunately, he tends to over do the production lately, and forget about the story.