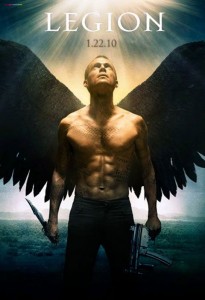 When I first saw the trailers for this movie I was intrigued. The basic plot of God giving up on humanity and sending his army of angels to destroy us all seemed fresh. The special effects looked okay, and the hint of an epic battle between archangels Michael and Gabriel got me excited. I left the theater disappointed to say the least.

We begin with Michael falling to Earth and quickly losing his wings and halo. We then have an encounter with two police officers who assume Michael is a burglar. One officer suddenly “transforms” and tells us that the end is coming. We then meet the rest of the cast at a diner/filling station owned by Bob Hanson and his son Jeep. We meet the pregnant waitress who Jeep would do anything for, the diner chef, a family stranded due to a broken down car, and a man looking to reunite with his son.

After this introduction of all the supporting characters, an angel possessed grandma comes into the diner for a surprise attack. There is not much more to this scene than what it is shown in the trailer. Michael soon comes in to protect the one person that can save the rest of humanity. The rest of the film is pretty predictable and does not pack many surprises.

My major complaint with this film is the script. The dialogue is so bad and laughable in many parts of the film. As a result, it seems that the actors are trying too hard to salvage their characters despite the lines they are given. All of the actors (aside from two) are trying way too hard here, and it is evident from the very beginning. Lucas Black as Jeep Hanson easily stands out to be the worst in the cast. This actor doesn’t seem to have a big future ahead of him. Also, the story delves off into subplots that are filled with holes and only leave the viewers with too many questions in the end.

Halfway through the film I realized that the acting, dialogue, and story were beyond frustrating. My last hope was the climactic battle scene with Gabriel and Michael. Once again, I was left disappointed. The scene is edited in the same style as the Bourne series with quick cuts and a fast pace. While it may work for that series, it certainly does not work here leaving the viewer slightly confused at what exactly is going on. On top of the editing, the entire scene is filmed in a dark location which again makes it hard to make out what is going on.

As I said before, all of the acting is over the top aside from two characters. Paul Bettany and Kevin Durand turn in the best parts of the film in their performances of Michael and Gabriel. Gabriel is intimidating and makes a presence of force when he steps in. Michael plays the constant protector and a man on a mission. Without these two actors I would find nothing redeemable in this movie.

Scott Stewart’s lack of directing experience showed in every aspect of this film. I can not honestly recommend this film to anyone. The acting is terrible, the action scenes are disappointing, and the viewer leaves the theater with so many unanswered questions and frustrations with the overall story. Throw all of this in with an awful ending, and you have a film that has the potential to be on the worst films of the year list.

Legion is an F