“Legally Blonde The Musical” at the Fox Theatre in St. Louis is a hit! 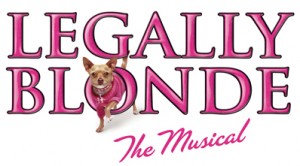 “Legally Blonde The Musical” opened Thursday night at the Fox Theatre. What I envisioned would be a fun filled night for all of the ladies, fabulously dressed in the pink which filled the auditorium, turned out to be an incredibly delightful and fun-filled musical that the guys enjoyed just as much.

Most people know the story of Elle Woods, thanks to the 2001 movie starring Reese Witherspoon, Luke Wilson, and Selma Blair. The musical is based on the novel by Amanda Brown and the movie, so there are many similarities. Elle is a blonde Delta Nu sorority girl in California, who lives for fashion, friends and her Chihuahua named Bruiser. Everything is perfect in her life – until her boyfriend dumps her because she is not serious enough. He is going to Harvard Law School, and in an attempt to save their relationship, she decides to do everything she can to get into the prestigious school and win him back. 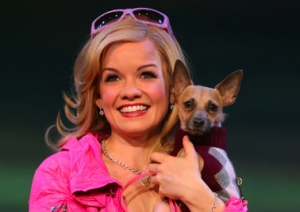 Becky Gulsvig plays Elle Woods in the national tour (read my interview with Becky here). I have to say that it is hard to imagine a more perfectly casted Elle on stage. Becky has the looks, the acting ability, and an incredible voice to pull it off. Her performance makes the character so likable in a way that seems easy for the actress, which is so important for the show. Never do you get the wrong impression or a bad vibe from Elle – rather the lovable, energetic blonde shines through and puts a smile on everyone’s faces.

The songs of “Legally Blonde The Musical” are full of energy, and the entire cast and ensemble are magnificent! The beginning of the show starts off with the sisters of Delta Nu singing “Omigod You Guys,” which is a really upbeat song about Elle getting engaged. This was a great way to begin the show, as we are introduced to the fun, humor, and great singing that is to come during the night. The next number, “Serious,” is primarily sung by Warner – played by Jeff McLean. This song is hilarious, as Warner and Elle go back and forth – both of them interpreting what the song is about differently. The entire show is written very cleverly, and the way this song is written is hilarious. The way Elle reacts to the breakup news she gets from Warner is priceless. 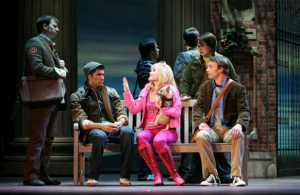 Elle decides to apply to Harvard Law, with the help of the Greek Chorus who accompanies her during the show. These ladies do an outstanding job as they guide Elle through her time at Harvard, with their singing and dance setting a great pace for the story. At Harvard, Elle is introduced to Emmett – the teaching assistant played by DB Bonds. Emmett seems to be the only one at school that understands Elle, and sees her as a bit of an underdog like him. Bonds does an exceptional job in the role, and compliments Becky perfectly as Elle and Emmett both find their places at Harvard.

After a confrontation with her brunette classmate Vivienne, Elle decides that she needs to die her hair to be taken more seriously. But when she gets to the salon, she meets a hairdresser named Paulette who talks her off the ledge. Natalie Joy Johnson does a great job in the role, and really stands out on stage. “Ireland” is a great example of her ability to sing and also make the audience laugh out loud. Also at the salon, we are introduced to one of the biggest surprises of the show. Ven Daniel plays Kyle, the UPS delivery guy who provides some of the best comic relief during the show. It will be hard pressed to find anyone in the audience with a straight face during his scenes. 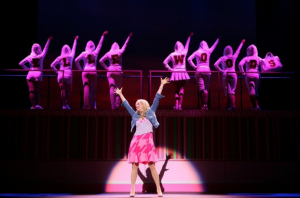 At the end of the night, the entire show is a whole lot of fun. The show is something that the whole family can really enjoy, and keeps you entertained from beginning to end. There is a great message in the movie, and guys and gals alike will go and have a great time. The music and singing is excellent, and the elaborate sets impressively change with the greatest of ease. If you are looking to go out and have a fun time at the theatre, “Legally Blonde The Musical” is the show for you!

THE FIRST NATIONAL TOUR OF LEGALLY BLONDE THE MUSICAL returns to the Fabulous Fox Theatre April 8-11 for a limited six-show engagement. Tickets are available at the Fox Theatre box office, all MetroTix outlets, online at www.metrotix.com or by phone at 314/534-1111. Orders for groups of 20 or more may be placed by calling 314-535-2900.