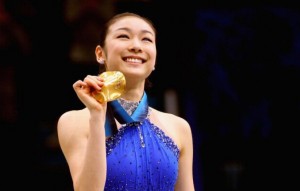 After the short program on Tuesday, Yu-Na was in first place with an almost 5 point lead over rival figure skater Mao Asada of Japan. But the winner of the long program yesterday was no question for the judges, who gave Kim Yu-Na a free skate score of 150.06. That score was 16.11 points higher than the world record of 133.95 that she only set two days earlier! Yu-Na won the gold medal with a total combined score of 228.56 – beating Asada by 23 points. This was an amazing victory for the skater, who was very happy with her performance.

“I still can’t believe my performance,” Kim said after the long program. “I honestly don’t know why I cried… Maybe I was relieved, maybe I was satisfied with my performance.”

Joannie Rochette skated through the death of her mother, only two days before the competition started. Her hard work and willingness to continue in the competition, despite her tragic loss, earned her the bronze medal. Rochette said, “There were moments when I said to myself, ‘I really don’t want to do this. I want to take the first plane, go home, see my grandparents, my family.’ But I said to myself that in 10 years time, when I would think about all of this and when my mourning would be over, I would probably have wished that I had skated here.”

From the US, Mirai Nagasu took fourth place, and Rachel Flatt came in seventh.

Here are the final standings in Women’s Figure Skating at the 2010 Winter Olympics:

Watch the video of Kim Yu-Na in the long program, and winning the gold medal