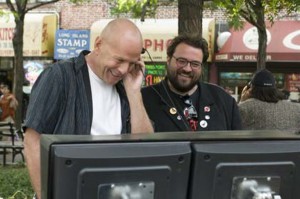 Actors, actresses, and directors love to put on a pretty face and say their film is great before the film comes out and is screened for critics.  Then the film comes out and it bombs critically and commercially, and they all quickly backtrack saying they never thought the film was a good idea.  Michael Bay, Shia LaBeouf, and Joe Johnston are just some of the more recent ones to make comments.

Well Kevin Smith is no stranger to this tactic as well.  Before Cop Out was released, he talked about how great it was to have Bruce Willis on the set, and how he made everyone else raise their game.  Then the film flopped, and Mr. Smith was quick to pass the blame on the mess of the film.  He never actually said the name Bruce Willis, but he was not exactly subtle in blaming the man for the film’s shortcomings.

Well Kevin Smith is out talking about his new film, Red State, which premieres at Sundance this Saturday.  He also had this to say about his experience on Cop Out.

It was difficult. I’ve never been involved in a situation like that where, one component is not in the box at all. It was f**kin’ soul crushing. I mean, a lot of people are gonna be like, ‘Oh, you’re just trying to blame the movie on him.’ No, but I had no f**king help from this dude whatsoever.

Kevin Smith has recently said that Red State is his best film.  I wonder if a year from now we will be able to post a quote from Mr. Smith saying that Red State was terrible because the editor screwed up everything in post production.

Do you like Kevin Smith?  Do you think it’s right for him to pass the blame?