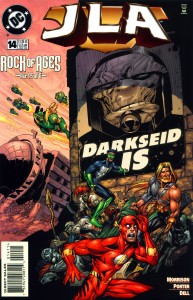 This week on Fat Man on Batman, Kevin Smith tries something new in lieu of having on a guest. Rather than the usual interview with a Batman writer/artist/creative, Smith reads one of his favorite Batman stories – JLA #14 (1997) written by Grant Morrison. It follows the “Rock of Ages” story line, where Darkseid has taken over Earth and Lex Luthor has formed “The Injustice Gang. to take on the JLA” For those who haven’t read the series, and plan to some day, be warned of spoilers.

Jul 11, 2013 – There’s no guest in the Fat Cave this week so the Fat Man READS Batman instead. Get an hour of slow oral from the director of CLERKS as he takes you through one of his favorite Batman stories of all time: 1997’s JLA # 14, written by Grant Morrison. Expect lots of tears.

Click here to listen to Fat Man on Batman #41.