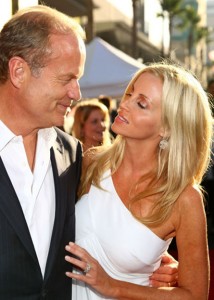 “Kelsey and Camille value privacy,” the actor’s rep said in a statement. “They understand that private lives sometimes get played out in public but ask on this occasion that their privacy – and the privacy of their children – be respected.”

Donatacci, a former Playboy model, is seeking primary physical custody of the couple’s children, daughter Mason and son Jude. The couple have been together since the mid-90s, and were married since August 1997.  Their two children were both born with a surrogate mother.

This is Grammer’s third marriage. His first marriage was to dance instructor, Doreen Alderman, who is the mother to his daughter Spencer Grammer. His second marriage was in the early 90s to an exotic dancer, Leigh-Anne Cushany. The couple did not have a child, but Grammer did have a child with hairdresser, Barrie Bucker, during the period he was married to Cushany.

Currently Grammer is starring in the Tony Award winning revival of La Cage aux Folles. Donatacci is currently rumored to be appearing on the Real Housewives of Beverly Hills.

Hmm, a Playboy model and an exotic dancer? Grammer does seem to have a type.

What do you think? Let us know in the comments!e