Right now, you would be hard-pressed to find someone who hasn’t heard of Kanye West’s little stunt at the 2009 MTV Video Music Awards this past Sunday. It looks like he has everyone right where he wants them.

Well, after getting boo’d off stage, and almost everyone hating him, he decided to issue this SINCERE apology in all caps on his blog:

“I’M SOOOOO SORRY TO TAYLOR SWIFT AND HER FANS AND HER MOM. I SPOKE TO HER MOTHER RIGHT AFTER AND SHE SAID THE SAME THING MY MOTHER WOULD’VE SAID. SHE IS VERY TALENTED! I LIKE THE LYRICS ABOUT BEING A CHEERLEADER AND SHE’S IN THE BLEACHERS! I’M IN THE WRONG FOR GOING ON STAGE AND TAKING AWAY FROM HER MOMENT! I WILL APOLOGIZE TO TAYLOR 2MRW. WELCOME TO THE REAL WORLD!!!! EVERYBODY WANNA BOOOOO ME BUT I’M A FAN OF REAL POP CULTURE!!! NO DISRESPECT BUT WE WATCHIN’ THE SHOW AT THE CRIB RIGHT NOW CAUSE … WELL YOU KNOW!!!! I’M STILL HAPPY FOR TAYLOR!!!! BOOOYAAAWWWW!!!! YOU ARE VERY VERY TALENTED!!! I GAVE MY AWARDS TO OUTKAST WHEN THEY DESERVED IT OVER ME … THAT’S WHAT IT IS!!!!!!! I’M NOT CRAZY Y’ALL, I’M JUST REAL. SORRY FOR THAT!!! I REALLY FEEL BAD FOR TAYLOR AND I’M SINCERELY SORRY!!! MUCH RESPECT!!!!!”

I am sure that after seeing this, his publicist or agent said something like “Kanye… NO.” Shortly after, the blog post was removed and this was posted:

“I feel like Ben Stiller in Meet the Parents when he messed up everything and Robert DeNiro asked him to leave… That was Taylor’s moment and I had no right in any way to take it from her. I am truly sorry.”

OK, well at least this time apology number 2 was not in all caps… But he decided to take a third stab at an apology before the performance that Kanye, Rihanna, and Jay-Z were scheduled for on the premiere of Jay Leno’s new prime-time show, “The Jay Leno Show.”

According to the LA Times Blog, the fourth time was the charm for Kanye. Today, they reported:

Kanye West phoned Taylor Swift this morning to express his regrets for hijacking her acceptance speech at the MTV Video Music Awards on Sunday night, and the country star officially accepted his apology, Swift told ABC News Radio. “Kanye did call me, and he was very sincere in his apology, and I accepted his apology,” Swift said to ABC’s Andrea Dresdale.

For those keeping score at home, this was the fourth time West had apologized for stealing the microphone away from Swift and proclaiming that Beyoncé deserved the award for best female video. It was, however, the first time West had spoken with Swift since the incident. During an interview on “The View” this morning, Swift revealed that Kanye had not yet reached out to her.

The Sunday night incident has kept the media busy. Last night, a sullen West appeared on the debut of “The Jay Leno Show,” and proclaimed that his VMA antics were “rude, period.” It was a fortuitous booking for Leno, as West was originally scheduled simply to appear with Jay-Z, who has a new album to promote. West helped Leno get off to a smashing start in the ratings, as the talk show pulled in 17.7 million viewers and easily won its time slot, our sister blog Show Tracker reports.

Fan response to Kanye’s interruption of Swift has been vehemontly anti-West, at least judging by the comments still pouring into Pop & Hiss. More than 700 readers have responded, few defending West, and hundreds more comments remain unpublished due to objectional or offensive language and themes.

Pop stars have also spoken out against the artist. Pink went so far as to label West “a waste” on NBC’s “Today Show” on Monday morning. Yet music history is filled with artists who have bounced from controversies far more severe than an acceptance speech takeover at an MTV awards show, and retailers such as Best Buy aren’t anticpating any long-term sales damange to West’s career.

While West did tell Leno that he plans to take time off and analyze his actions, he does have a fall tour lined up with dance star Lady Gaga. Dates have been revealed at the industry trade publication Pollstar’s website, and the pair are said to be playing Los Angeles on Nov. 16 at Staples Center. However, no on-sale information has been released, and the tour dates have yet to be publically confirmed by either camp.

For her part, Swift is definitely not holding a grudge. When asked if things would be smooth between her and West in the future, she told ABC Radio, “Yeah, definitely.”

Earlier on “The View,” she spoke about what was going through her mind at the time of the incident. Swift said, “I think my overall thought process went something like, ‘Wow, I can’t believe I won. This is awesome. Don’t trip and fall. I’m going to get to thank the fans. This is so cool. Oh, Kanye West is here. Cool haircut. What are you doing there? And then ouch. And then, I guess I’m not going to thank the fans.’ “

What do you think? Sincere, or BS? 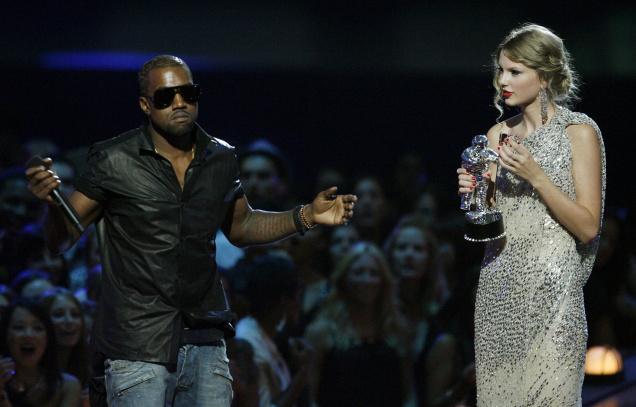