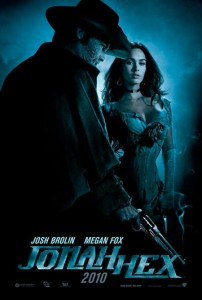 Ever since it was announced that Megan Fox had been dropped from the next Transformers movie, I sat around in a daze, just hoping and praying that she would be cast in a Western movie starring Josh Brolin based on a DC Comics character.

When I found out she was going to be in Jonah Hex, it was like my prayer had been answered. I’ve long extolled her acting abilities and was anxious as ever to see her next entry into her attempt to win an Academy Award. My friend Elizabeth was a little more skeptical about it, so I had to bribe her with an offer of dinner at 54th Street to get her to go. Somehow a free movie ended up costing me $30.

I’ll admit, I’ve never read the comics the film was based on. Actually, I’d never even heard of the character until I started seeing the previews. After reading the premise, however, it seemed like it had an original enough plotline that it could be at the very least entertaining, if not necessarily the next Citizen Kane.

The opening scene sets the background for the story. Jonah Hex (Josh Brolin) was formerly an officer in the Confederate army who disobeyed a direct order to burn down a hospital by his superior officer, Teddy KGB…er, I mean, Quentin Turnbull (John Malkovich). In the aftermath, Jonah ended up killing his best friend, Jeb Turnbull. As a result, Turnbull murders Hex’s family, brands his face, and leaves him tied up to die.

But Jonah doesn’t die; otherwise, that’d make for a pretty crappy rest of the movie. He’s found half-dead by Native Americans who manage to keep him alive. As a result of this near-death experience, he can take more damage to his body than most and can communicate with the dead by touching them.

After hearing Quentin is killed in a hotel fire, Hex continues his life as a bounty hunter, never failing to get his target. When it is discovered that Turnbull is actually alive and secretly constructing a superweapon, President Grant offers Hex the chance to finally kill Turnbull in exchange for a full pardon.

This film is a historically accurate biopic that closely follows the 1876 centennial celebration.

What’s that? You mean they didn’t have horses with dual Gatling guns attached to the side? Or semi-automatic incendiary crossbows? Well they did in my world.

Obviously, you can tell by the plot that the film is for those willing to suspend disbelief. If you can manage to do that and are looking for mindless entertainment, Jonah Hex might suit your purpose. The cinematography’s well-done, and there are some humorous moments in the film.

If you’re looking for believability, emotional attachment to the characters, or gratuitous female nudity, however, you’ll have to look elsewhere. Since I haven’t followed the comics, I don’t know all of the characters and enemies of Jonah Hex. I just have to assume there is apparently a snakeman evildoer who eats people and spits venom in the comics, otherwise there is a ridiculous anachronism in the film.

On top of that, the acting is just so-so. As I said above, you never really feel an emotional connection to any of the characters, due in part to the acting and in part to the script. The film is also pretty short, clocking in at around 80 minutes. You have to wonder how many people are going to want to spend $10 on something that ends so quickly. Last time I did that, I ended up with a nasty rash.

Still, I found myself at least somewhat entertained by the film. If you’re a big fan of the comics, check it out; although from what I hear, the backstory is different from the comics. Megan Fox also looks pretty good in her corset (apparently the waist on it was only 18 inches). In summary, the movie’s a lot like a date with me: offers plenty of eye-candy, but no real credibility and it’s over so quickly you’re just left an emotionless shell.

Jonah Hex gets a C-.