“Jersey Shore” Cast Continues to Cash in; Snooki Is Writing a Book 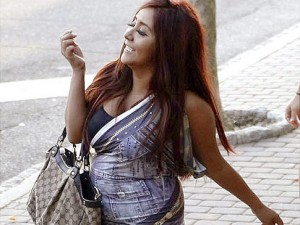 Seriously, what about her doesn't scream "intellectual".

It may not be surprising to many people, but the cast of Jersey Shore is continuing to try and make the most of their fifteen minutes of fame. Unfortunately, for most of us that fifteen minutes is dragging on a bit too long. J-Woww recently announced her spread for Playboy, and now Snooki has announced plans to write a bit. Funny, I didn’t even know she could read…

The book, titled A Shore Thing, was announced Wednesday through publisher Simon & Schuster. No word on if Nicole “Snooki” Polizzi plans to write the book herself or if it will be inevitably ghost written.

What makes this funnier is that Polizzi tweeted earlier this year about reading her first book, “I have mind blowing news! I am officially reading my first bo! Lmao! Nicholas Sparks “dear John!” … I’m proud of myself.” Now, I admit she was probably joking, but she doesn’t seem the type to be able to sit down and write a few hundred pages.

“I’m pumped to announce to my fans a project that I’ve been working on for some time,” Snooki said in a statement. “This book will have you falling in love at the shore.”

If she does write this herself, I’ll be impressed. I doubt it will be prose that will make anyone weep, but if she manages to push out a couple hundred pages it will be a huge achievement for someone usually limited by the texting limits of a cell phone.

What do you think? Will you read the book? Let us know in the comments!