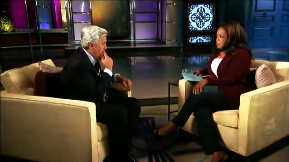 Oprah Winfrey sat down with Jay Leno, in an interview which is set to air tomorrow afternoon.  It looks like Oprah isn’t holding back on Jay, and is going to be asking some questions about the Conan O’Brien situation that everyone wants answered.

One of the questions that Oprah had for Leno was, “When they asked you to go back, did you ever think ‘I’m taking away Conan’s dream?'” She also asked, “Did you ever ask yourself ‘Well am I being selfish?'” She tells Jay that “America has taken sides.  And there are a lot of people not on your side.”

Here is an excerpt from the interview:

Winfrey Have you talked to Conan in person?
Leno I haven’t talked to him through all this. No. I haven’t.
Winfrey Did you want to pick up the phone?
Leno Yeah, but it didn’t seem appropriate.
Winfrey Why?
Leno I don’t know. I think it — let things cool down and maybe we’ll talk, you know.
Winfrey Were any of the things that he said about you hurtful?
Leno No. They were jokes. And that’s okay. I mean –
Winfrey So jokes don’t hurt you.
Leno It’s what we do, you know? You can’t — it’s like being a fighter and say when you got punched in the head, did it hurt? Well, yeah. But you’re a fighter. That’s what you do.

Whos side are you on?  Conan O’Brien’s or Jay Leno’s? Discuss below in the comments, or here on my.reviewstl.com.