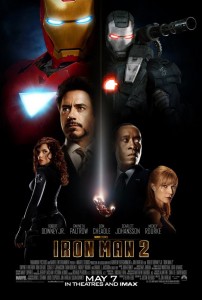 In May of 2008 a film based on the Marvel 2nd tier character, Iron Man, was released into theaters. Most box office analysts thought the film would enjoy modest success similar to Marvel movies such as Fantastic Four and the Hulk. The film far exceeded expectations bringing in an astounding $585 million dollars worldwide, and came in second only to another comic book adaptation, The Dark Knight. The film brought back its star, Robert Downey Jr., to the A-list, and along with it actor/director Jon Favreau. Cut to two years later and the sequel to the once B-list character is now the most anticipated movie of the year.

Iron Man 2 picks up right where the first film left us, at the conference where Tony Stark (Robert Downey Jr.) is announcing that he is indeed Iron Man. This time we see it from the view of Ivan Vanko (Mickey Rourke) who has a personal grudge against Tony Stark.  Vanko believes his father was pushed out of the arc reactor project (a new source of energy established in the first film), and is under the impression that Stark shall pay for his father’s sins in blood.  Unfortunately for Tony, Ivan seems to have inherited his father’s genius as well, and he quickly creates a new weapon, Whiplash, to take down Tony and Iron Man.

Back on the home front Tony is dealing with the growing pressures of his company, and the added pressure of a government who wants him to turn over his Iron Man suit. His biggest issue is that the device that is keeping him alive is now poisoning him, and he is racing against the clock to find a cure to palladium poisoning.

There is a lot going on in Iron Man 2, and while it manages to be a fairly entertaining ride there are a few quibbles that might have people a bit disappointed. The biggest disappointment seems to be the villains in the film, neither of which are very terrifying, nor never really seem to pose much threat to Tony Stark/Iron Man.  This creates for a bit of a void in the suspense.

One of the other quibbles is the dialogue. Justin Theroux and team seem to have punched up the dialogue with a myriad assortment of one liners which don’t always work, and occasionally elicit a soft chuckle.  The amount of winks at the comic book audience can get a bit tiring after a while. (And this is coming from a huge comic book geek.)

Sometimes you can’t help it, and you write yourself into a plot hole. So, what do you do? Ah, well you toss in a bit of “deus ex machina”.  Can’t figure out how to stop the palladium poisoning? How about a helpful hint from dear old dad who has been dead for decades?

Luckily, these don’t detract from what overall is a fun experience. Robert Downey Jr. once again proves why he is perfect for the role. Downey plays Stark with the right amount of narcissistic brash overtones, but somehow maintains a unique affability.  Stark is kind of a jerk, but he is the jerk you always root for, and not many people could pull that off other than Robert Downey Jr.  It takes a unique actor to play a hero with anti-hero qualities.

Don Cheadle seems to be a suitable replacement for Terrence Howard who played Lt. Col. James “Rhodey” Rhodes in the first film. A lot of times the replacement of a major character can be disastrous, and I thought for sure this would be one of those occasions.  Once the film got started I gave it little thought as Cheadle seemed to completely inhabit the character.

Gwyneth Paltrow once again surprised me at the strength of her performance. She stands toe to toe with Downey Jr., and doesn’t manage to get overshadowed. I’ve had my doubts about her in the past, but she does great as the love interest in this series.  She truly outshines Scarlett Johansson , who may look absolutely stunning throughout the film, but is never believable as a super intelligent, bad ass S.H.I.E.L.D agent.

Both Sam Rockwell and Mickey Rourke suffered from the lack of quality material given to them.  Both have proven over the past few years they are among the best actors out there, but once again neither of them feels truly threatening. Rourke’s phony Russian accent is a bit over the top, as is his own personal addition of Whiplash’s love for parrots. (No, I’m not kidding.) Rockwell plays Hammer a little to spineless, when the character calls for a bit more of ruthless. There is one scene where he seems to grasp the character, while the rest of the time his character seems to be mischievous and “evil” comic relief.

Despite the flaws in the movie, director Jon Favreau knows what the crowd is looking for. They want to see intense action sequences, and the one of a kind performance that Robert Downey Jr. brings to the character.  He still manages to keep the quality above the level of other Marvel films of late such as Ghost Rider and Fantastic Four, and he might even keep it even keel for many of the fans of the original film.

Iron Man 2 is a film that almost everyone will enjoy. It is a simple enough blockbuster action film with plenty of heart, and sometimes even some brains. If you liked the first film, there is a very good chance you’ll have a blast at this one.  Don’t set your hopes to high, and accept the film for what it is, and you’ll have a really good time. 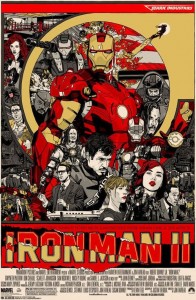 e, as is our first sequel of the summer in Iron Man 2 and the results are an entertaining and solid follow up to the widely lauded original, but I can’t quite put my finger on how it stacks up to its predecessor.

The conundrum I have with the film is the tone and focus this film takes.  Now there isn’t a lot of plot like before, there are a few new characters to digest, and briefly glimpsed ones get even more screen time.  But the film actually handles it’s “more” well in that we get a good grasp of who everyone is and what their motivations are rather efficiently; but it doesn’t flow the greatest as it jumps in and out everyone’s stories.  The film is still the Tony Stark show first and foremost but it jumps away on a couple occasions for just a tad too long from our favorite iron suited alter ego.  In fact, this film is barely an Iron Man movie and more of a Tony Stark tale; which I actually think is a good thing.  The Iron Man action scenes are great and its best moments are better than the original’s set pieces, but there are really only two or three scenes of Iron Man doing his thing.  The film is more focused on Stark and his issues of being a hero and a crisis he is having as part of his role as a superhero.  Now again, I think this is great, but I wasn’t really prepared for it going in and was caught a bit off guard and think I need to see it again to really settle on a final opinion, especially when comparing it to the first film.

Jon Favreau does a great job with his actors and teams in just about every capacity and the film looks like 100 million bucks.  The action is well shot and the effects beautifully rendered and you will have a tough time catching the switches between practical and digital effects at times.  The Jarvis effects in Stark’s work shop are eye poppingly cool and awesome and this stuff will look incredible in the inevitable Iron Man 3-D.  The fighting is also well choreographed and the Monaco fight scene throws the kitchen sink at you while the mix of flight, gunplay, and beat’em up in the finale has some incredible moments.

But be prepared for a lot of down time from Iron Man if that is what you are in this for.  This is a journey of Stark as he is forced to transition and deal with what Iron Man has made him become.  I mentioned in my review for Iron Man that I would gladly see a Tony Stark movie and this film is as close to that as I think we might get.  Also, there just doesn’t seem to be as much good character banter as there was in the first film, what is here is great again, but Stark is alone quite a bit more and while it isn’t necessarily a bad thing I can’t say I didn’t miss the fantastic back and forth that Favreau and his actors created. Remember there isn’t a lot of plot to get lost in but the characters are all rather interesting especially the film’s main focuses, Justin Hammer and Tony Stark.

Now, Robert Downey Jr. is just as great as he was in the original and he owns Tony Stark as before.  If you loved/hated him in the first, then you will love/hate him here; but for those that love Downey as Stark, and how can you not, this is another fun showcase for the actor.  The biggest stand out outside Downey is Sam Rockwell as Hammer, Stark’s competitor/replacement in the weapons community.  He has everything that Stark does, just less than.  From his personality to his weapons he is always a step behind and Rockwell plays it perfectly.  Don Cheadle does a nice job as Rhodey, replacing Terrance Howard from Iron Man and I liked how they introduce him and wink at the actor switch, and I think I even enjoy Cheadle more in the role.  Sadly Gwyneth Paltrow and Downey don’t get as much screen time together, with a couple scenes in the trailer absent in the final film, but she does a nice job with this evolving role for Pepper Potts.  Scarlett Johansson doesn’t have much to do in the film and while she handles the action well and can only imagine she is here to not have to introduce her in The Avengers.  Speaking of the Avengers, Sam Jackson is fantastic in his brief scenes as Nick Fury and I can’t wait to see him get his own movie as The Avengers is rumored to be centered around his one eyed ball buster.  Lastly, Mickey Rourke looks great as Whiplash and nails the grizzly Russian look and speech, but I do wish he also had a tad more to do.

In the end, Iron Man 2 is more than a worthy successor of the original and might have a chance to catch up or pass the original on repeat viewings.  Fans of the first will be right at home for the first act but be prepared for the tonal switch of the final two.  This change still has a number of fun moments, but we get to look into what makes Tony Stark tick and things get a bit dark and introspective for a bit there.  It’s almost a stretch to even call this an action movie, but it is a nice little comic book movie that has a lot of room to potentially grow in peoples eyes as they surely will be seeing this time and time again in theaters this summer.  What Favreau and Downey do here though, gives me great hope that they will knock the Demon in a Bottle story out of the park whenever they get around to making a third film.