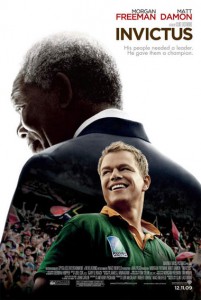 The year is 1994 and  Nelson Mandela (Morgan Freeman) has just been elected the first Black president of South Africa, after having spent 27 years in prison for his anti- apartheid activism. It’s a tumultuous period for the country. For the first time in the nation’s history, the White ruling class (i.e. Afrikaners) is out of power and anxiously awaiting political payback for decades of legally mandated segregation. However, much to the surprise of Whites and the consternation of Blacks, Mandela is more interested in reconciliation than revenge. To that end, he is looking for something behind which the country can unite. Perplexingly, he chooses the South African rugby team. Knowing that South Africa will be hosting the  Rugby World Cup the following year, he decides that it would be unifying if their team would win the cup. There are just two small problems with this plan. First, the team has long symbolized the White power structure and second…they suck.

In an effort to inspire the team to greatness, Mandela summons team captain  Francois Pienaar (Matt Damon) to his office. Mandela focuses not on game strategy but on ways to improve the teams standing within the community. Like a presidential  Mr. Miyagi, he gives the team tasks that seem useless if not downright counterproductive. They tour the segregated slums of South Africa when they should be practicing; they teach rugby to Black children that would rather being playing soccer. But, as a bond slowly forms between the two worlds, they begin to win games.

The film, wisely, stays away from the minutia of rugby…at first. And these are some of the movie’s strongest moments. Watching Mandela having to paradoxically defend White Afrikaner culture to his Black African supporters is fascinating.  He realizes that reprisal for years of degradation, while no doubt initially satisfying, would ultimately undermine his nation future.  However, when the movie focuses on rugby as a game rather than rugby as a symbol, it loses steam rapidly.  Some of this is undoubtedly a byproduct of the fact that most Americans (myself included) know little to nothing about the sport.  But the movie certainly doesn’t do itself any favors by stubbornly refusing to give the audience any tutorial whatsoever about the game.  Furthermore, rugby (or at least rugby as it’s depicted here) doesn’t appear to be a sport that lends itself well to cinema.  The climax of the movie hinges on whether or not the team can cling to a 1 point (goal?) lead for the final 7 minutes of regulation play.  That’s right, the thrilling climax of the film centers on running down the clock.

Invictus, despite being grounded in recent historical events, is a somewhat antiquated film; conventional in form, it‘s a bit of a throwback. It’s essentially your standard underdog sports film set against the backdrop of racism. Freeman was born to play Mandela and he doesn’t disappoint. But the film does. Overly reverential, it gives virtually no insight into exactly why Mandela was so able to overcome a (perfectly natural) desire for retribution.  The entire proceedings have a haughty, self-congratulatory tone.  As if it expects to be commended for being anti-apartheid…fifteen years after the fact.  It’s an interesting (and uplifting) story with strong performances.  But it collapses under the weight of its own earnestness.