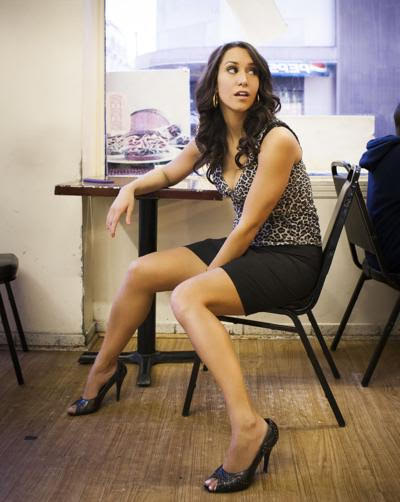 With a variety of days and times to choose from, there really is no good excuse as to why you won’t be there – as this is one show you will not want to miss! Known for her quick wit and impeccable impressions, Rachel has been a standup staple for quite some time, appearing in the comedy special Women Who Kill, The Standups on Netflix, as well as her own special Only Whores Wear Purple.

Ahead of her performances at Helium, Rachel answered some questions for ReviewSTL who is wildly anticipating her upcoming set. Promising some new material, and impressions of her lovable mother Karen, Rachel is an avid storyteller. Most of her jokes and set are inspired by her own life events and some of the odd and unique circumstances she finds herself in.

Rachel uses her own awkwardness and comfort level surrounding a situation to develop some gut-punching jokes and creates a relatability between herself and the audience that allows each show to be a unique experience. Further, her discomfort canbe our discomfort. And, hopefully we can all laugh about it.

I personally loved speaking with Feinstein, and our conversation stood out to be one of the best interviews I’ve ever had with a comic. Her laughability, humor, and charm is present through and through on stage as well asoff. With this being a special engagement falling on Valentine’s day weekend, I asked what St. Louis audiences can look to forward to. With that, come one and come all as Rachel has a set filled with jokes for singles as well as those coming coupled up, delivering material from before her marriage, as well as after, with a sprinkle of her newfound motherhood. With what will hopefully be the ingredients for an anticipated special to follow her 2016 Only Whores Wear Purple, a lot of amazing things are on the horizon for the comic.

Feinstein is currently working on a prank call album with fellow comic Jessica Kirson, as well as being a featured subject in the upcoming documentary Hysterical. The film will follow several different boundary-breaking women in comedy as the audience will get a backstage pass into the lives of the hilarious women who have become a voice for their generation and gender. Describing the exciting life of a comic, Rachel is excited for fans to see a further look into the diverse and unique lives of these women, such as Feinstein “sitting in a hotel room eating mac’n’cheese with a coffee filter.” (Touché Feinstein, I do that too… and have a plethora of utensils to use, so no judgement.) Without much more info about the project, I do know that I’m personally super stoked to see the finished feature which will air on FX.

With some other current projects being engineered right now, the already “comic-to-watch” has alot of fantastic and exciting things to keep an eye out for in the near future. With the hopeful end to a pandemic that has left a giant hole in the entertainment industry, especially when it comes to live performers, it’s exciting for both audience members and entertainers to be reentering that atmosphere(with safe and preventative measures of course.) In fact, Rachel even stated that she needed it just as much as audience members do. “I’m married to a normal person, thank God,” she stated, when discussing the need to be around people and atmospheres where a punchline is always desired.

Being a pillar and foundation of this giant group of women in comedy, I’m so excited to see what other accomplishments lie ahead for Feinstein. And, getting the opportunity to speak with her was for lack of better words – enlightening and nothing shy of wonderful. Don’t miss the opportunity to see comedy gold this weekend with four nights of performances this week, Thursday through Sunday. Also, make sure to snag your date and tickets for one of the showings at www.heliumcomedy.com. If flying solo or don’t wanna bring a date, even better! Ditch the dead weight and come enjoy a night of laughs with your pals instead! I’m not sure about what you have planned for Valentine’s weekend, but I surely know what I’m doing….do you?