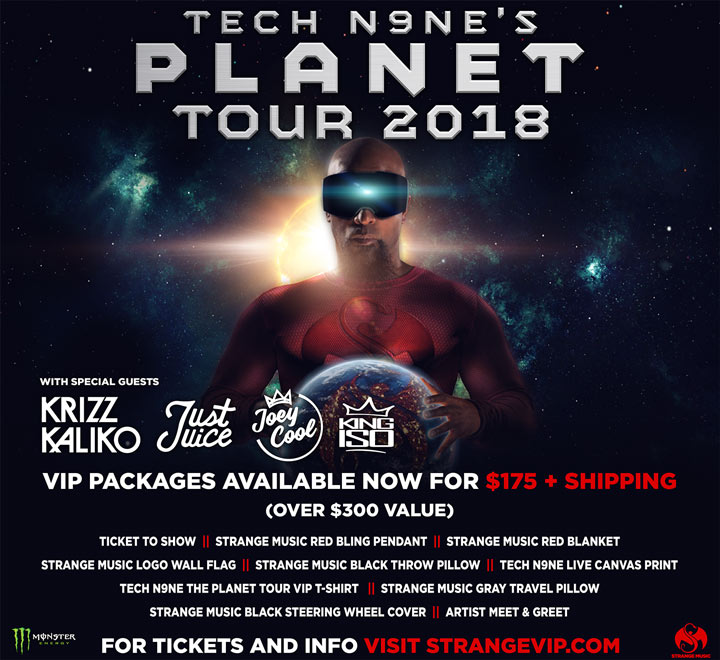 Tech N9ne, one of the world’s most famous rappers, took time out of his busy schedule to talk with me about his new album “P.L.A.N.E.T”, his upcoming show in Saint Louis, and more.

Q: What makes the new album different from prior albums?

“I don’t recall ever doing an album out of hurt from the last album. The Storm came out and I thought it was a masterpiece, but other people thought “Eh, it’s cool.” So, I was butt-hurt. But, I never created an album based off of my anger from the last, and that’s one thing that makes this album different. The other thing that makes it different is that I left this planet mentally and spiritually to create my own planet. I created a planet with more togetherness, more love, more understanding for each other. I created a bundle of songs that everybody loves, and the love from the fans is crazy. They all agree, and it’s a beautiful album. Maybe I should leave this planet mentally more often.”

Q: Describe this “planet” to me. What kind of “planet” are you trying to form?

“I didn’t try to make nothing, I already made it on March 2nd *chuckle*. I created a planet; I created the planet “P.Y.U.N.E.” It stands for “Peaceful Youth Unit Neutralizing Earth” because this earth needs neutralizing. We all need to be seen as on the same level because we are separated by class, religious beliefs, culture, and skin-tone. The God commandment is togetherness, and that’s what I feel my planet will be. My “planet” is happening out here on this tour, because everyone comes together under one roof for one purpose, and that purpose is to see some strange music.”

Q: What’s your favorite track off this new album?

“That’s hard to say because they’re all my babies. I like the real in-depth music, so “My Fault” is one of my favorites because I tell stories about some past things that people needed to be clear about. I really like the song because it was a challenge to write it. Writing it was kind of weird, which is a little weird in itself because I’m weird. The song was hard to stay on beat to, but I liked the challenge. It’s an R&B track so it was a challenge for me, and it came out perfectly. Another one I love is “Bright Fall.” It was a big production; there was a choir. I love it because it’s talking about my life; it’s another one of those in-depth songs that I enjoy. It’s talking about me running from my darkness towards the light. The darkness has consumed me over the years in my real life, and the days of my past keep resurfacing and try to bring me out of the light I have found. But, I’m running; I’m running from the darkness that is trying to make my “Bright Fall.” But, I don’t want my bright to fall, I want my bright big and tall.”

Q: “What if it was Me?” was a fan-favorited song. Some want to know if this song was from a personal experience  or if it was simply trying to bring light onto police-violence victims.

“It was just touching on the topic of police shootings, one particular shooting. It was a big shooting out in Louisianna, and I was saying “what if it was me?” because I fit the description. Khakis, shorts, black t-shirts–that’s usually my whole wardrobe. What if it was me, you know? My fans love me. It was Alton Sterling’s shooting that made me think “what if it was me?” They said he was a pedophile–they said he was a bad dude. But, at the end of the day, I still didn’t want him to be killed if he wasn’t armed. No matter how famous you are, no matter what background you come from, no one deserves to die in such a way.”

Q: Fans also wanted to know what the explanation was behind the song “Fragile.”

“It’s pretty self-explanatory. Somebody at a publication in L.A. came out to a show, and the show was so good and so on point that they accused me of lip-syncing. That pissed me off. I’m an artist and I care about what I make, so be careful about what you say about it. I go hard for my fans and the music I make, so how dare they say I was lip-syncing just because my music is on-point. So, that was my inspiration. And then Kendrick came on and talked about critics, and then we created a video about bullying. People need to take it easy on one another sometimes, so we killed two birds with one stone by creating that video. The reporter who accused me could have ruined my career, so I created that song out of anger and it happened to be a hit on the radio. The reporter ended up apologizing in person about a year later. Out of disrespect, I wore a see-through, plastic mask and looked like a robber in a restaurant when the reporter interviewed me again and apologized. I turned a lot of heads.”

Q: You had a pretty rough childhood, and a lot of your songs pertain to those events. When you were younger, was rapping your escape?

“No, I started rapping because I loved the art form. I thought it was wonderful, and I was actually a dancer before I was a rapper. I started doing rap out of rhythm and rhyme, and I’m still doing it that way. I just ended up being really good at it and people wanted to pay to hear it. It’s a blessing. What helped me deal with my struggles when I was younger, honestly, was nothing. I ran away from home when I was seventeen. I dealt with life as it came to me and I did it until I couldn’t do it anymore. I dealt with being homeless for a split second until I couldn’t do it anymore. Music became my escape later on as life got darker, and I learned that it was my therapy. Now it’s all of my therapy, even my fans’. It’s so beautiful. But when I was younger? Nah, I had to take it as it came.”

Q: You still dance often? Should we expect that at the upcoming show?

“Oh yeah. I can bust a move at forty-six years old, and you’ll see plenty of that at my shows when we all come together.”

Tech N9ne went on to talk about the three different personalities we would see at his upcoming show.

“You will see the “G”, the “Clown,” and the “King.” The “Clown” is scary, the “G” is respectful, and the “King” is narcissistic. These are all of my personas that you will see at my concerts. I gave these personas names. To explain, if I know my rap music is better than everyone’s out there, that would make me the “King.” If I did drugs like ecstasy and Molly, that would be the “Clown.” The “G’” is me growing up in a neighborhood where I saw a lot of deaths. Through that, I learned how to respect life and appreciate life. That’s the gangster, that’s all me. When people come to my shows, that’s what they’re going to see.”

Tech N9ne will be performing at The Pageant in Saint Louis on June 14th. The show will being at 8:00 p.m. Tickets are still available by visiting www.ThePageant.com.