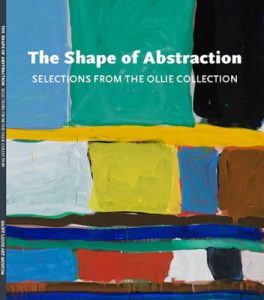 Participating in the exhibition “The Shape of Abstraction: Selections from the Ollie Collection,” James Little, an artist who’s work is being showcased as part of the exhibit, answered some questions for ReviewSTL about his work, his inspirations, and what this particular exhibit means to him.

Inspiring his more recent pieces, Little explains that his art is multilayered, finding inspiration in “nature, architecture, textiles, and plain old geometry.” The pictorial context is the hardest part for Little when it comes to completing his work but it is also the challenge that is the most exciting part.

Tracing back art through the modern era to the renaissance, James said he finds things that inspire his art or move him to create his pieces further than just historical references. In his own words, James considers it as “adding to the canon.” “I’m not the guy who is trying to reinvent the wheel, I’m just trying to make the wheel better.”

For his audience, Little believes that color and design can invoke certain emotional responses. In abstract art, there is a liberty and free will that the artist is allowed. More specifically, James paintings don’t specifically narrate anything, but evoke a natural response from his viewers. “I try to get to the most primal feelings that we have: Color, I try to evoke (not provoke) a sense of smell, taste, feel. I also project physicality in the painting, such as speed, content, and things like that. No actual literal references.”

To break this down even more, James isn’t there to explain his paintings to someone who views them. His agenda is strictly to create art that creates a response in the most natural of ways. He takes the medium, removes himself, and then pays respect to his ultimate goal. Culturally, he draws his own inspiration from his own aesthetic that separates what he says to be a very important binary, being politics and art. He gathers his own understandings about one from the other, creating a conversation for himself that inserts his art into his own understanding of the world around him.

Speaking with Little further, it was interesting to heart James say “History doesn’t make art. Art makes history.” Also recognizing art in all of the presentations in which it is formatted, Little noted that he understands all the artistic references throughout nature, culture, and history, and fits them into their perspective of how we view modern art versus art that is created historically.

James had a lot to say and it is was truly a pleasure getting to speak with him about his work. You can view some of his pieces as part of the exhibit at The Saint Louis Art Museum, as part of the exhibition “Shape of Abstraction.” The exhibit is currently on display now until March 22, 2020. James is one of five artists being featured, all whom have been seen as black artists revolutionizing abstract art since the 1940’s.