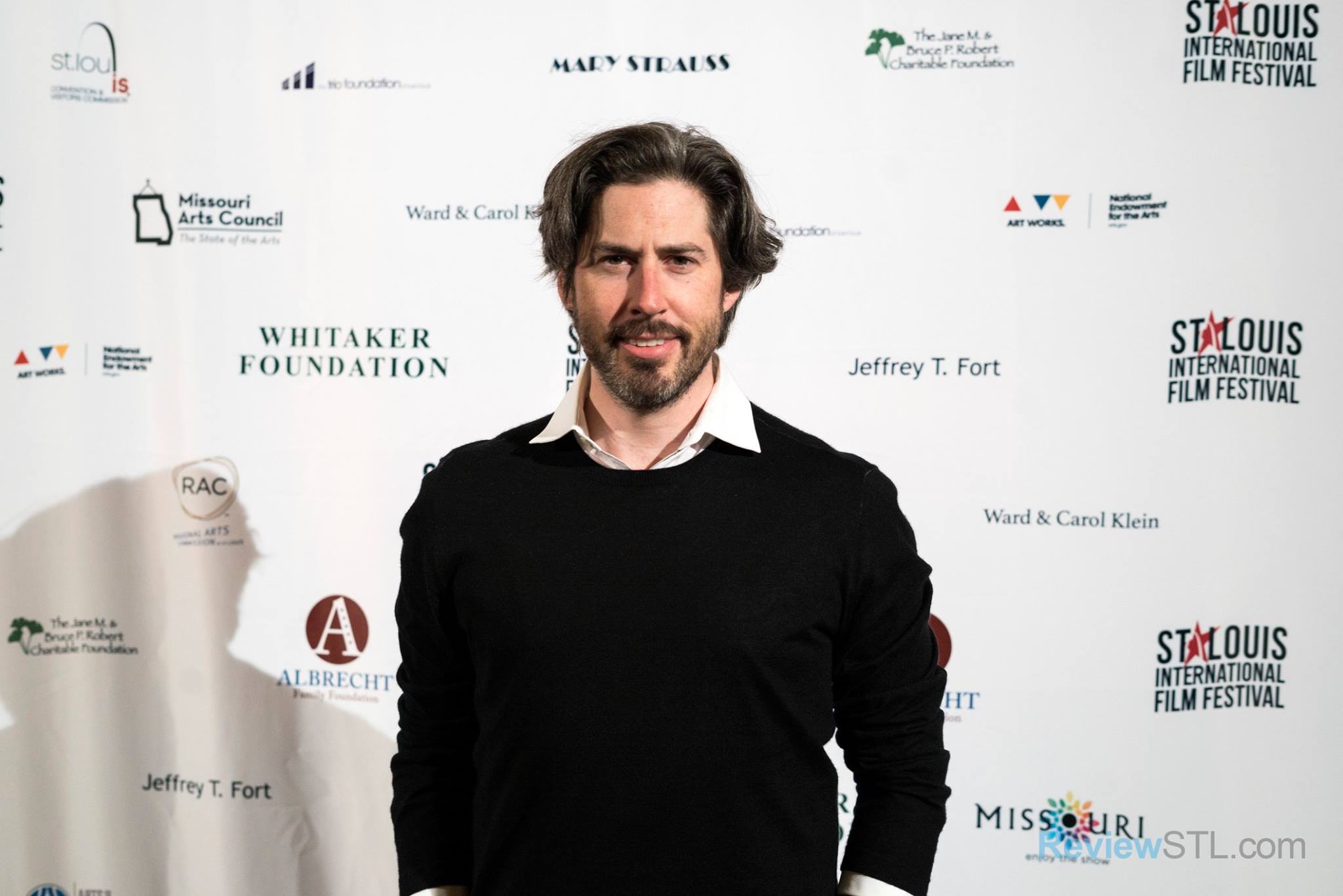 “I love flying into St. Louis. It brings back this kind of flood of memories from shooting Up in the Air,” says director Jason Reitman as we sit inside The Cheshire – one of the filming locations of his aforementioned 2009 film.

Reitman returned to St. Louis earlier this month for the 27th Annual Whitaker St. Louis International Film Festival (better known as SLIFF) to receive the Contemporary Cinema Award before a screening of his latest film, The Front Runner.

See photos from the award ceremony and Q&A here. 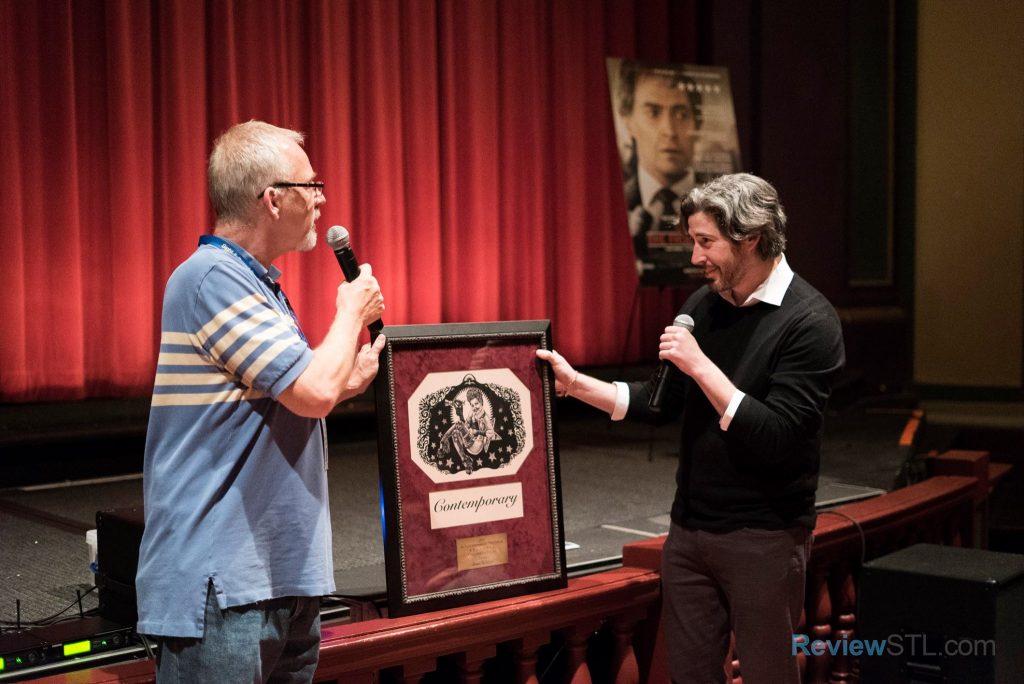 Hugh Jackman stars as Senator Gary Hart, the front runner for the Democratic nomination for President in 1988. That was until an affair he was having was uncovered by the media, and it all unraveled within three weeks.

When asked what his thought process was behind portraying Gary Hart as neither good nor bad, Reitman says, “I don’t believe in heroes or villains in real life. I do enjoy movies that have heroes and villains – I like Star Wars. But for this kind of movie, if you’re going to make a movie about real life, I don’t think you can have heroes or villains. I think people are more complicated than that and certainly, Gary Hart is more complicated than that.”

Read our review of The Front Runner here.

“He’s this really interesting litmus test for how we view flaws in our leaders,” says Reitman on Gary Hart. “He was such a compelling candidate for the presidency. Kennedy-esque, handsome, charming, well spoken. Brilliant. And prescient, kind of beyond all imagination. And at the same time, he’s a human being who made human mistakes. And they were private ones. So it really kind of begs the question of our curiousity, and where a private life meets a public life.”

“Yeah,” the director said instantly. “Beyond the cosmetic similarities between Hugh and Gary, he’s an actor I’ve been wanting to work with for a long time. Specifically for these last five years or so, with this run of Les Miserables and Logan, and The Greatest Showman. He’s really taken it up a notch. I thought Logan was an exceptional performance to take a character over the course of nine movies and stick the landing with such an emotional closing film.” 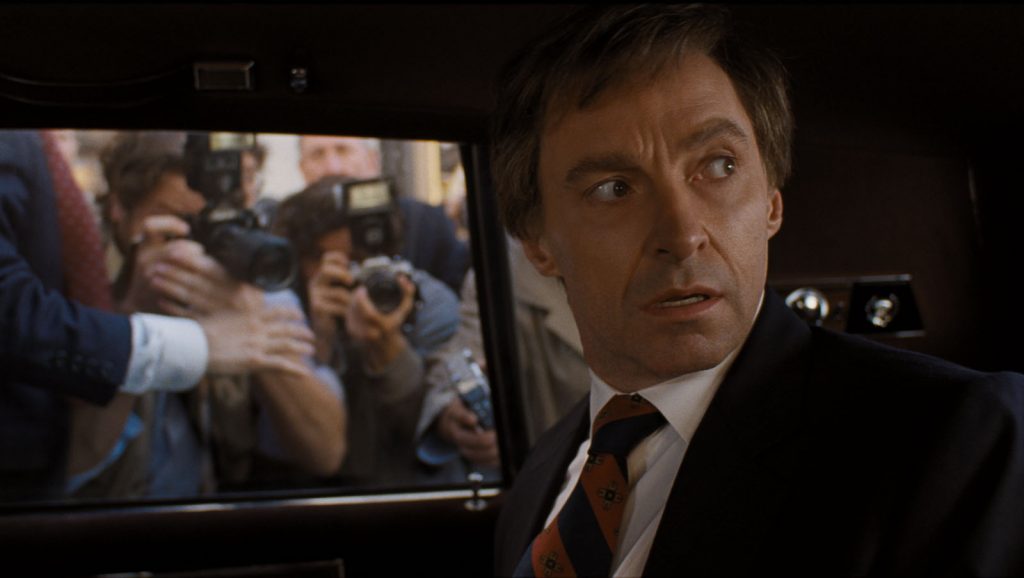 Reitman wasn’t the only one blown away with Logan and Hugh Jackman’s performance. The film grossed over $619 million worldwide and sits on Rotten Tomatoes with a 93% out of 363 reviews.

“I was familiar with the stories of his decency, and work ethic. And those all came true. And it’s not an easy role,” says Reitman. “The first thing you learn as an actor is to identify your character’s goals, and their choices. And here was a character where you were never going to understand that. It became his job to protect those ideas, and let the audience peek in but never actually walk in the door. It’s a very tricky thing to do, and never judge your character.”

Kathleen Kaiser of Matinee Chat asked the director if the real Gary Hart and wife Lee watched his film.

“I had spoken to everyone before I started making the movie, just our of decency,” Reitman remembers. “At the end, we finished the film and the first person we showed it to was Donna [Rice], then Gary and Lee Hart, their kids, the campaign, Tom Fiedler from The Harold; They all saw the movie. I just kind of flew around showing it to them.”

On the subject of showing a film to the people it’s about, Reitman understandably says it can be nerve-wracking.

“It’s terrifying,” says Reitman. “If I told you I’m going to make a movie about your life. Let me pick the worst week… We’ve approached this story, which has historically been thought of as kind of a joke – a short joke with the punch-line of the name of a boat – with empathy. The real people can feel the sensitivity of the actors, and I think Gary and Lee Hart particularly felt that from Hugh Jackman and Vera Farmiga. As did Donna Rice from Sara Paxton. And I think they felt my empathy.” 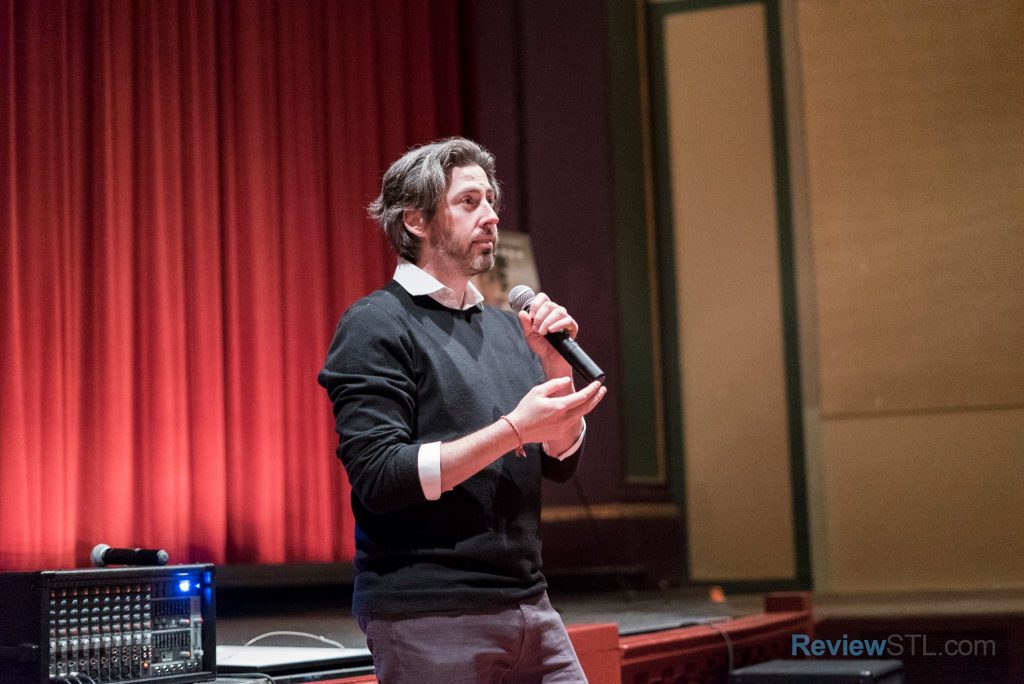 One of the most interesting things about the film is how it tackles the question of the news cycle, and what should be private versus public. Reitman recounted his own personal experience with the news every day.

“What I find interesting is the way our curiosity works, and the way we sum up stories in our heads,” says Reitman. “There’s something complicated about that. I think there’s something to the fact that we take this moment – which is kind of a groundbreaking moment as far as the relationship between celebrification and politics – and instead of thinking about what changed in that moment, and how that put us on a road to today, we think of it as the name of a boat and a photograph. Because we enjoy the humor of it and enjoy the curiosity of it.”

The director has a daily routine that is probably similar to most of ours.

“I wake up and look at my phone’s news app, and often there’s a story about the mid-terms – and right next to it is a story about Ariana Grande and Pete Davidson breaking up,” says the director. “And they’re from the same source! They’re both from The Post, and they’re given equal weight. And I don’t blame them – it’s not their fault. We’re the ones clicking it. So I’m asking the audience, ‘what is it about our curiosity that allows us to gloss over something important because we enjoy the sorted details?'”

As far as the film goes, Reitman feels he stayed pretty true to the actual story. Of course, as with any film, there are changes that have to be made.

“At the end of the day, you’re making a movie. And you have to hold to the emotional truth,” says Reitman. “Oddly, we did zero in on a lot of facts. There’s a lot of detail work. A lot of things had to take place so that the Gary Hart scandal could happen, and we tried to honor those details in a way that is weaved in so that you only notice if you’re looking for it.” 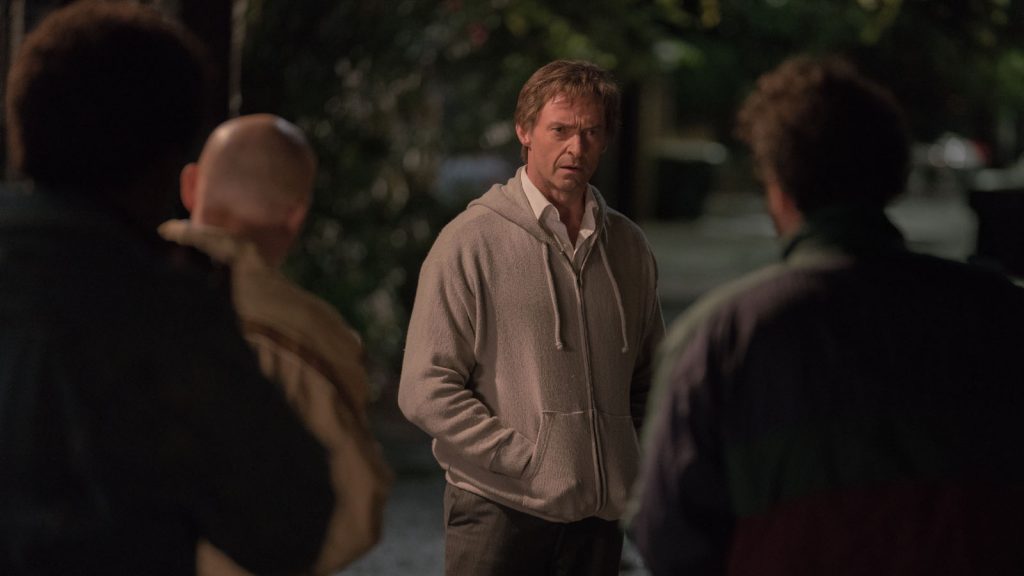 The director recalled all the things that had to happen in order for the real story to even come together.

“You have the birth of satellite trucks, which creates the 24-hour news cycle. The movie opens inside a news van, and we’re pulling out of that… and we’re hearing about the superdelegates that allowed Mondale to take the candidacy over Hart in ’84,” says Reitman. “So we are feathering in, actually, an incredible amount of detail. Down to Sweeney allows Joe Trippi to borrow his car, and we give him a Wrangler – because that’s exactly what Sweeney drove back then. The kind of detail that literally doesn’t matter to anyone but me!”

Other than Hart and his family, one of the most compelling characters in the film is AJ Parker – played by Mamoudou Athie. The Post reporter is an amalgamation of two journalists from the real story.

“E.J. Dionne Jr. of The New York Times, who interviewed Hart and was told ‘follow me around’ – that’s where that quote comes from – and Paul Taylor from The Washington Post who asked Hart, ‘Have you ever committed adultery’ and ‘Do you think adultery is immoral?’ We wanted one throughline of a journalist – a journalist who you could really empathize with, who was struggling with the question of, ‘Is this a relevant question for me to ask?'” 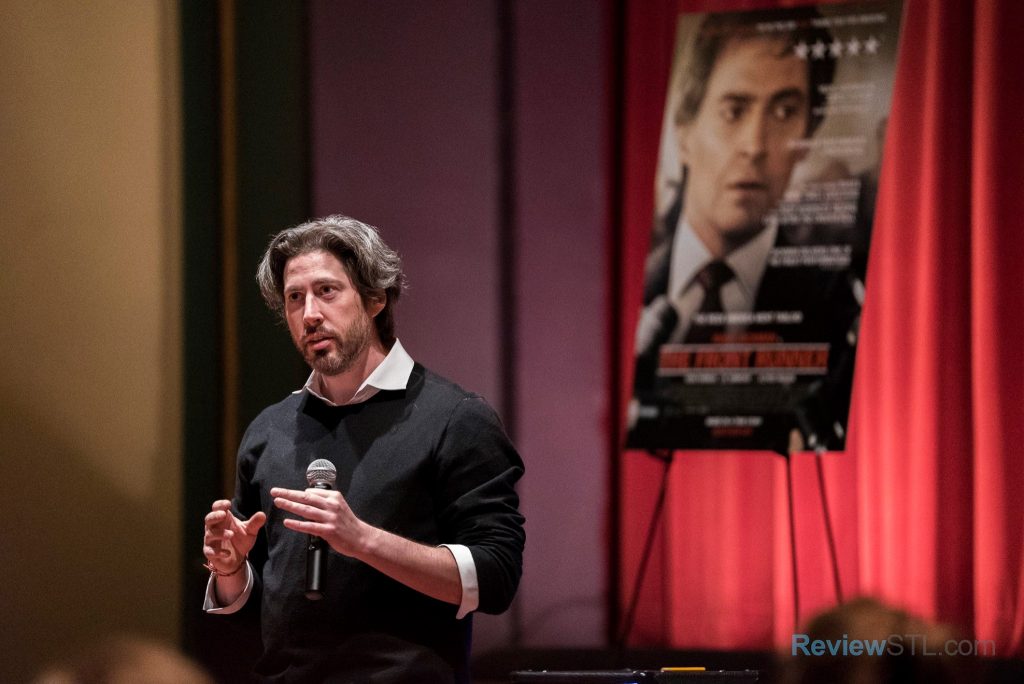 Jorie Jacobi from Alive Magazine asked Reitman what draws him to flawed characters, like Hart in this film and others he has told stories about.

“These are the people I’d want to spend time with in real life,” says Reitman. “I like complicated people. I like how exposed their flaws are. From the moment I read the book, Thank You For Smoking, I loved Nick Naylor – and I knew I wanted to spend time with him. I didn’t want to spend time with the guy from the lung association. I figured dinner with him is going to be a lot more fun. And I do have a very weird ‘Marvel Universe’ of characters between a tobacco lobbyist, a pregnant teenager, a guy who fires people for a living, a woman who’s trying to end a couple’s marriage, and the complicated characters in this film.”

This is the second film Reitman has directed in 2018.

“It’s been an exciting year,” he says of his latest – the first one being Tully, which he collaborated on once again with writer Diablo Cody and star Charlize Theron. “To be able to make two independent films – films that are not easy to make. That’s really because of Bron, the Canadian company that financed both of them.”

The Front Runner is now playing in theaters everywhere. 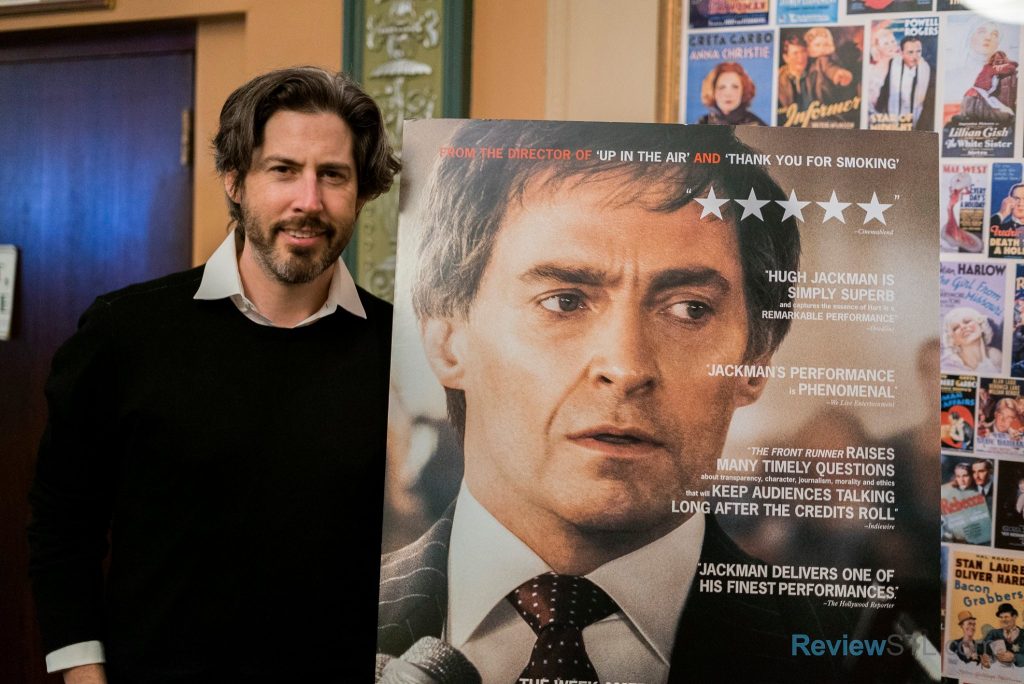